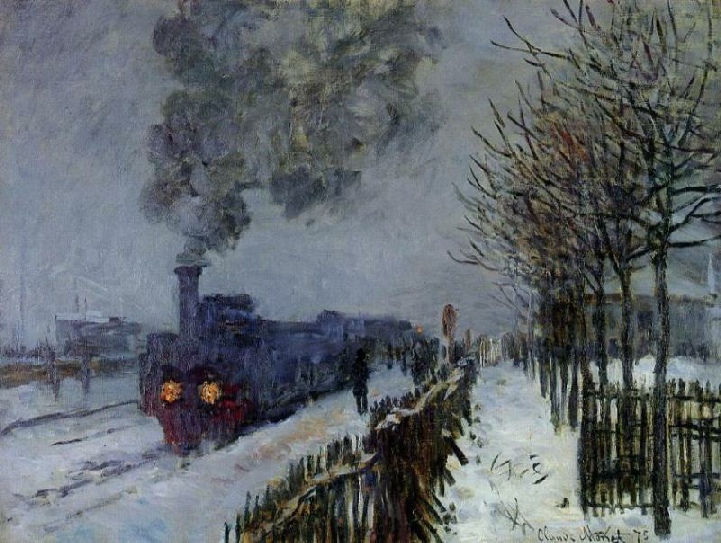 THERE has always been something special in the magic which the railway scene has so potently distilled. No other product of the worldwide industrial revolution has so successfully caught the minds of men at all ages, and the entry of an express train into the landscape never fails to hold the stage until it disappears along its steel-set course. The attraction is not simply a question of size, rather it is usually centred on the head of this swiftly moving, or slowly trundling, apparition - the steam engine, for the steam-operated machine has had a strong evocative effect since its birth.

The steam engine was known as a means of locomotion over one and a half centuries ago, and so far, of all man’s mechanical inventions, it has been the greatest mover of the emotions to appear on the scene. One of our foremost authors on the subject of railway and engineering history, L. T. C. Rolt, has suggested that, for the Romantic, the speed and power of the steam train epitomises the freedom and romance of travel - the gloom of the great station, the twinkling lights in the night, the glaring fire and the noisy exhaust of the engine all add up to the right answer. Yet at the same time the Classicist is aware that the romance is a by-product of order and discipline and that our great railway systems have provided probably one of the most successful feats of organisation evolved by man. The fact that railways appeal so strongly to many musical and academic minds could well be due to the blend of romantic freedom with classical order which they represent.

In the early days of railways not only did the very power of the locomotive seem an almost dreadful thing, but there was also the feeling that the machines were almost part of the elements themselves. Turner, who was certainly one of our more famous artists of the first half of the nineteenth century, must have felt this strongly, for his painting of a Great Western broad-gauge train entitled Rain Steam and Speed, in the National Gallery, portrays its subject to perfection. 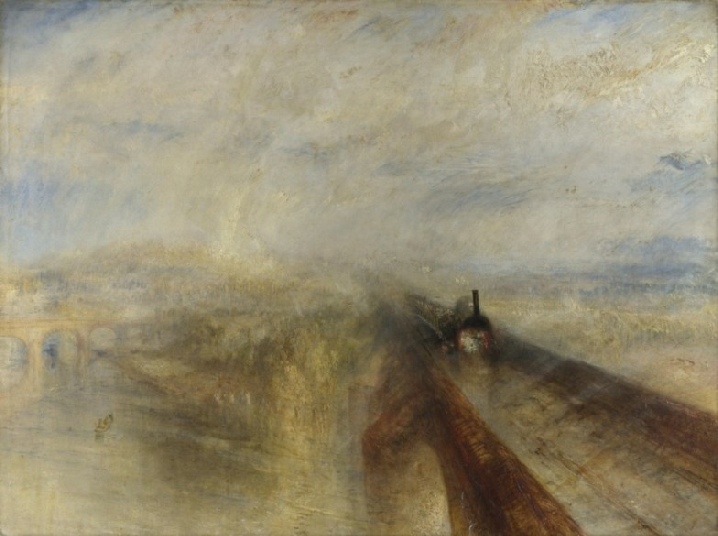 Other nineteenth-century artists of some renown have also been affected by the power of the railway to influence the lives of ordinary people, and the sadness of leave-taking or the joy of reunion in Frith’s painting of Paddington station (reproduced by the Great Western Railway as a publicity jigsaw puzzle in the 1930s) is a typical example. Abraham Solomon’s The Departure and The Return, are others. Monet too was attracted by the pull of the railway, and two of his pictures, Le Train dans la Neige and Le Pont de l’Europe - Gare St Lazare, very adequately represent both the elemental and the embarkation into the possibly unknown.

Although the railway has always appealed to the general artist, the past seventy-five years have also produced a number of specialists who themselves have been lovers of railways and who have set out to paint them, and in particular their locomotives, in a more technically correct form. One of the earliest forms of railway art became apparent in the 1890s shortly after the introduction of a new journal published monthly for those interested in railways. The Locomotive Magazine came out at 2d per copy or 2s 6d per annum, post free, and contained an occasional colour plate.

The magazine was originated by one F. Moore, who also published a series of locomotive photographs. By 1897 Mr Moore was advertising “the handsomest pictures of locomotives and railway trains ever produced - without a rival - F. Moore’s oil paintings of locomotives, a triumph of artistic and mechanical skill”. Indeed, to both the technically minded and the general enthusiast the pictures were magnificent, with every detail correct and gleaming in the right colours. Basically the oil paintings were made on photographs, but they were very good and are now collector’s pieces. They were cheap too - size 15 inches by 12 inches on a panel in a gold frame at 35 shillings. 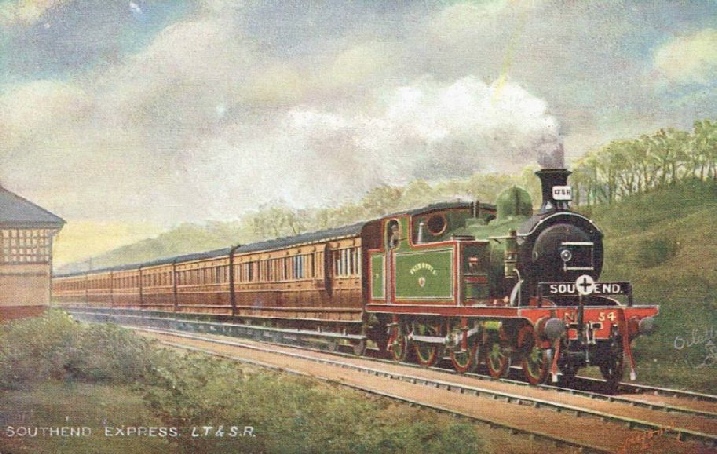 Above and below: Two examples of F. Moore’s paintings reproduced as commercial postcards. Above is a Southend express of the London Tilbury & Southend Railway; whilst below is a Newcastle to Liverpool express of the North Eastern Railway. 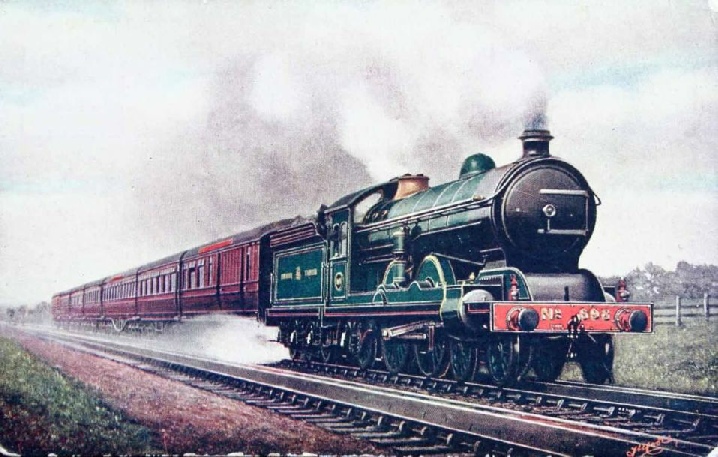 Moore had the railway market pretty well to himself until the inter-war years, when Murray Secretan and H. E. Le Flemming came along to broaden the choice. By that time too, the railways had decided that their advertising could well be pictorial, and such famous Royal Academicians as Norman Wilkinson and half a score of his contemporaries were commissioned to paint for them. Almost certainly, the first artist of any note to have been commissioned to paint railway scenes for promotional purposes was the Newcastle painter James W. Carmichael. In the 1830s he produced a whole series of pictures of the Newcastle & Carlisle Railway, for a commemorative brochure.

But it has been the post-war scenes which have produced some of the best railway pictures, led without doubt by that great artist Terence Cuneo, who himself has a deep interest in the subject. Cuneo was commissioned by the newly formed British Railways to paint a series of pictures suitable for poster advertising, though the actual idea came from the London & North Eastern Railway, who wanted a new angle on the Royal Border bridge at Berwick-on-Tweed. He tells the story of how it was arranged for a “model” engine to stand on the bridge for his sketches and how engrossed he was in his work that he forgot the time, and it was only by means of a great deal of whistling from the engine, and finally the driver moving off in disgust, that he was persuaded that the real “Flying Scotsman” would shortly be on his tail.

Bridges over water seem to have appealed to Cuneo for, in addition to the Royal Border painting, he has also worked on pictures of the Saltash, Tay and Forth structures. The last-named he has portrayed twice - once for British Railways and once for Alan Pegler depicting his famous engine No 4472 Flying Scotsman. For the former picture it was necessary to clamber right up into the girders, tubes and cat walks of the Forth bridge in the teeth of a 50-mile-an-hour wind. Below trains rumbled incessantly, smoke from their chimneys making fascinating patterns through the lattice of the girders - it must have been a real labour of love.

Terence Cuneo has since painted many railway subjects ranging from the tiny restored Talyllyn Railway in Wales to huge 3 ft 6-in gauge South African engines. He does this work as a hobby, in the main, and as a specialist subject for those whom he feels can appreciate the skill and time which go into the paintings. It is difficult even to try to decide which one likes best, for they are all superb. Most of Cuneo’s pictures are in private hands, but one is permanently on view at the Science Museum at South Kensington - a mural of Waterloo station. 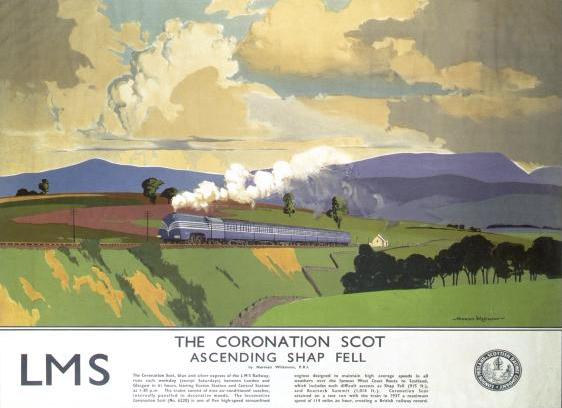 One of Norman Wilkinson’s travel posters produced in 1937 for the London, Midland & Scottish Railway to promote rail travel between London and Glasgow. It shows the “Coronation Scot” travelling through the Cumbrian countryside.

Another well-known artist whose love for steam is such that he actually owns two full-sized ex-British Railways loco-motives, is David Shepherd. This artist paints railway subjects mainly for his own pleasure, and his pictures remain mostly in his own collection. Shepherd, perhaps better known for his wildlife scenes, has “starred” in two films, entitled The Painter and the Engines and The Man who Loves Giants, the second was made for BBC television. While Cuneo had a head start and is probably the more colourful of the two men, Shepherd has depicted the railway engine in stark realism, as he saw it in the last dirty, unkempt and unwanted period of its life.

Both Cuneo and Shepherd have made good use of their talents in aid of preservation. Cuneo has been particularly generous to the narrow-gauge lines of Wales and the Standard Gauge Steam Trust at Tyseley, and Shepherd has done a great deal for wild life in East Africa.

A visit to the Museum of British Transport at Clapham will provide a view of not only some of Norman Wilkinson’s and Terence Cuneo’s paintings, but also the work of a younger artist, David Weston, who came to railways as a subject for his brush almost at the eleventh hour of steam. His work is good and can be found on walls of the home of Sir Peter Allen, lately Chairman of Imperial Chemical Industries, and others lucky enough to have been able to commission a picture of their favourite subject. Also on Sir Peter’s walls is a unique collection of oils by that well-known author and artist Cuthbert Hamilton Ellis, who has a predisposition to things German, Scottish and London & South Western. Ellis is really a romantic whose love of the railway, particularly in his youth, has been ably reproduced in the pages of copy and artwork in many books.

Today both the Locomotive Magazine and F. Moore are gone, but the work which was so ably pioneered continues. Vic Welch has illustrated by oil paintings of locomotives, many of the magazines and books of the two major publishers of transport subjects. George Heiron, one of Britain's leading photographers of railways is also an artist of high repute, who has painted first because of his love of the subject, and then professionally; his work too has been seen regularly in books and periodicals.

So, from Turner and Cuneo, Monet and Shepherd, we have colourful, sombre, dour, and even forbidding, pictures of one of man’s more positive inventions, and all of them display that monumental quality which somehow characterised the railways in their greatest and most splendid years. It was Christian Barman who said that this quality could perhaps have come first from Vanbrugh, whose great house at Seaton Delaval might well have influenced George Stephenson in his early years at Killingworth, to be later reflected in the great porticos of Euston and Curzon Street, Birmingham. Certainly there can be little question that Vanbrugh’s architecture was best suited to the first unparalleled achievements of the railway age. Had he lived in that age, what stations he might well have given us, and what pictures they in their turn might have brought us, from those whose skill has been mingled with that great attraction which railways and the steam engine have always evoked. 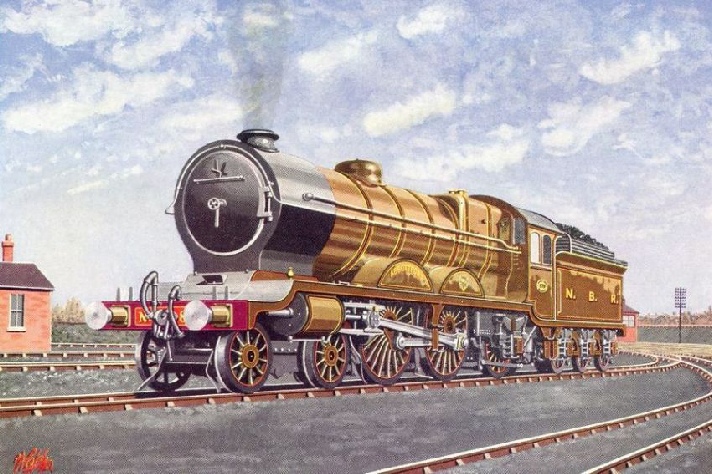