HOW THE GROUPING AFFECTS OUR EXPRESS TRAINS. A London and North Western Engine “piloting” a Midland Engine on a Manchester Express.

AT the beginning of the year 1923 there took place what was probably the most momentous development in the whole of British railway history. The whole of our railways, whose numbers ran into hundreds, were swallowed up into four great “groups”. As a result, apart from the Metropolitan Railway and the various Underground Railways of London (which also form one group), there are now only four enormous railway systems in Great Britain, which have taken in all the remainder.

This is, of course, the origin of various strange names of railways which have only been heard of during the last couple of years. One of these is the London, Midland and Scottish, known more familiarly as the LMS; another is the London and North Eastern, or the LNER; and another is the Southern. Of the big railway groups only the Great Western Railway retains its old and honoured name.

Then, of course, there are one or two important “joint” railways, in the working of which the large groups act as partners. The LNER and the LMS are joint owners, for example, of the extensive Cheshire Lines system, round Liverpool and Manchester, and the Midland and Great Northern Joint Line, which runs across from Peterborough to Yarmouth; while the LMS and the Southern Railways are similarly concerned in the working of the Somerset and Dorset Joint Line, from Bath across to Bournemouth. These joint railways are still worked as separate concerns, with their own carriages, and (except in the case of the Cheshire Lines) their own engines as well.

A RESULT OF THE LONDON AND NORTH EASTERN GROUPING. A Great Central Engine hauling the “Harrogate Pullman” over the Great Northern Main Line.

In the grouping the Great Western Railway had the easiest task, and has seen the least change. All that it had to do was to swallow up some busy little railways in South Wales - such as the Taff Vale, Rhymney and Barry, which bring the enormous output of coal from the Welsh mines down to the docks round Cardiff for shipment - and also the Cambrian, which threads its tortuous way through Central Wales, and is familiar as giving access to the popular seaside towns of Aberystwith and Barmouth, both of which are now on the GWR.

The biggest of all the new groups is the London, Midland and Scottish, which, as its posters try to make you believe, “takes you everywhere”. It certainly does take you nearly everywhere, when you think of Wick and Thurso in the far north of Scotland, Holyhead in the extreme west of Anglesey, Hull on the East Coast of England, and then Bournemouth on the South Coast, and Bristol in the Southwest. Not content with that, it owns an extensive line across from Belfast to Londonderry, in Ireland, and a share in a narrow-gauge line which goes even further west on to the wild Atlantic coast of County Donegal.

The chief constituents of the great London, Midland and Scottish group are the late London and North Western and Midland Railways; to them have been added the Lancashire and Yorkshire, North Staffordshire and Furness Railways in the North of England, and the Caledonian, Glasgow and South Western and Highland lines in Scotland. The colour which has been chosen for engines and coaches is the familiar “Midland red”; and all that one regrets in this connection is the disappearance of the beautiful chocolate and white livery of the old North Western coaches, and the “sky-blue” of the Caledonian engines, which is also vanishing.

A RESULT OF THE LONDON, MIDLAND AND SCOTTISH GROUPING. A Lancashire and Yorkshire Engine hauling a West Coast Express on the London and North Western Main Line.

Next in order, and not far behind the leaders in size and wealth, comes the London and North Eastern Railway. This company is proud of advertising that it serves “The Healthy Side of Britain”, and it has, in fact, a virtual monopoly over the traffic to and from the East Coast seaside resorts right the way from Southend round to Inverness. The “East Coast Route” - the old Great Northern, North Eastern and North British Railways, stretching from London to Aberdeen - is the backbone of this group, and with these lines are combined the Great Eastern, Great Central and Great North of Scotland Railways.

After the London, Midland and Scottish and London and North Eastern Railways there comes, third in point of size, the Great Western Railway, which in the old days used to tie with the London and North Western for the distinction of being England’s premier railway. The fourth, in order, is the Southern Railway, comprising the London and South Western, London, Brighton and South Coast, and South Eastern and Chatham lines. There has been a beginning of grouping in Ireland, too, the Great Southern and Western and Midland Great Western Railways having recently combined to make a Great Southern group in the Irish Free State. 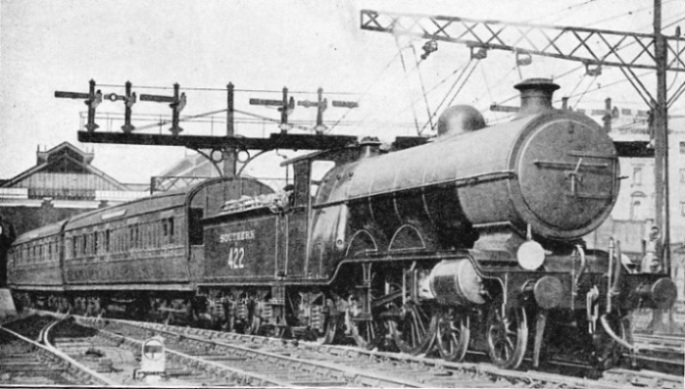 ENGINE NO. 422 OF THE SOUTHERN RAILWAY LEAVING VICTORIA. The Number indicates No. 422 of the “Brighton” Section of the Group.

It is hard for us to realise the perfectly colossal size of the larger of these concerns. The LMS operates 7,525 miles of railway and the LNER 6,715 miles, while the GWR can boast of 3,800 miles and the Southern of 2,200 miles. If all the LMS lines, including sidings, were taken singly and laid out end-to-end, they would make a total of just over 20,000 miles, or five-sixths of the distance required to girdle the earth!

The extent of the engines, carriages and wagons possessed by each railway group is best realised by noting some of the numbers that they are now beginning to carry. On the LMS line the first five thousand engine numbers are reserved for Midland engines; from 5,000 to 9,999 we find London and North Western engines; then follow Lancashire and Yorkshire engines from 10,000 up to 12,999; and the numbers of the Scottish engines begin at 13,000! The actual number of LMS engines is just over 10,000 - about 10,330, to be exact. During the year 1923 these engines between them actually ran a total of some 226,000,000 miles in service, or more than the engines of any other railway in the world, and this within the confines of our little island of Great Britain!

On the London and North Eastern the total number of engines is 7,410; but the proportion of very large and powerful locomotives in this case is rather greater. The Great Western Railway owns 4.000 engines and the Southern 2,250 in round figures.

And what about carriages and wagons? Of passenger coaches the London, Midland and Scottish Railway owns roughly 27,000, the London and North Eastern 20,003, and the other two groups 10,000 apiece! When we come to goods wagons, the figures are simply staggering. Think of them: 325,000 LMS wagons, 299,000 LNER wagons, all but a 100,000 on the Great Western and 40,000 on the Southern! Running a railway in these days is a colossal business indeed.

Gradually the designs of engines, coaches and wagons will be standardised within each group, and though this will mean that the individuality of each of the old lines, which made the study of railways so fascinating in the past, will to a certain extent be lost, yet uniformity in the rolling stock makes for economy in building and in maintaining. For the present, it is most interesting to see engines being tried far away from the lines on which they used to run, and this will be brought home to you by the photographs in this article, which show some “strangers” at work on what used to be the London and North Western and Great Northern main lines. 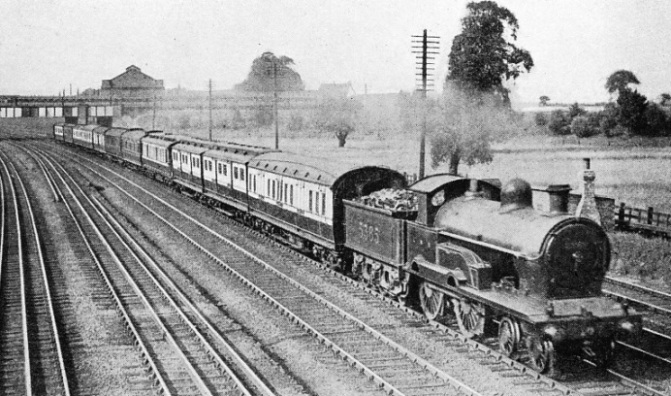 CARLISLE TO LONDON EXPRESS, LMS RAILWAY. The London and North Western Engine is in the new LMS Group Colours, with the big Number on the Tender; the fifth, sixth, tenth and twelfth Coaches in the Train are also painted in the new LMS Red Livery.