The Great North of Scotland Railway

GREAT NORTH OF SCOTLAND RAILWAY No. 81. DESIGNED BY JAMES JOHNSON AND BUILT BY NEILSON & COMPANY IN 1893.

THE Great North of Scotland began with an attempt to make a line from Aberdeen to Inverness, but it has not got there yet, its trains from Elgin to Inverness running on the track of the Highland Railway. And in the same year, 1846, extensions were authorised to Fraserburgh, Peterhead, and Aboyne. Not until 1852, however, was the main line begun, the first sod being cut at West Hall, near Oyne, in the centre of Aberdeenshire; two years afterwards it was opened to Huntly, and in 1856 it reached Keith. In 1852 another company, the Deeside, obtained an Act, and in 1857 completed the line through Banchory to Aboyne. For more than thirty years this, with about half a dozen other local ventures, has been amalgamated with the Great North, and it forms the southernmost of its branches, and has been extended as far west as Ballater.

From Keith the line went to Craigellachie, whence it reaches Elgin and Lossiemouth to the north, and Boat of Garten to the south-west. Fill in this corner of Scotland with a few loops and branches that skirt the coast from Cruden Bay to Peterhead, from Cairnbulg to Fraserburgh, and from Banff to Lossiemouth, and you have the Great North which goes no farther north. In short, its territory is the old earldoms of Mar and Buchan that are now cut up into the three or four counties bordering the south coast of the Moray Firth. 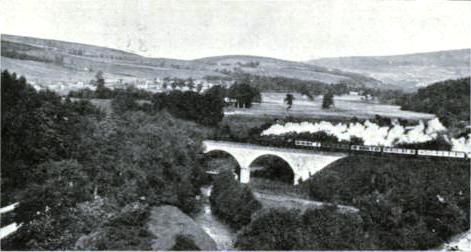 Over the whole extent of the railway, as has been well and truly said, there are to be met with many picturesque spots, with castles, churches, and fortalices innumerable, each famous in song or legend or historical reminiscence, and presenting an infinite attraction to the artist and the antiquary. And we may add that it adopted the electric telegraph to commence with, and its proudest boast is that it has never owned a second-class carriage.

But little more than sixty of its miles are double track, and though it nowhere rises above 702 ft - at the far end of it near Boat of Garten - and there are no remarkable engineering features beyond the Spey Bridge, there are several trying gradients, particularly one close to Rothes where the ascent is 1 in 50 for a mile and a half. It is a pleasant and useful line for holiday folks who remember it by its distinctive carriages, white over red horizontal like the pilot flag, which contrast well with its green engines.

It was from Kittybrewster that its first forty miles were opened in September 1854, and there the locomotive works remained until, in 1900, they were transferred to Inverurie, where they have a character of their own from being built entirely of granite, the best and cheapest building material in the neighbourhood; of which also is the ballast of the line - spread from hopper wagons with a plough at the end of the train. Most of its engines have been built by private firms, some being from stock and some from the designs of the locomotive superintendents; and, as elsewhere, there is a vast difference between what they used to be and what they are.

For a long time they have been 4-4-0’s. During the last twenty-five years the cylinders have increased from 16-in by 24-in to 18-in by 26-in, and the heating surface from 756 to 1297. The driving wheels have varied between 4 ft 6-in and 6 ft 1-in, and the weight in some cases has become nearly half as much again. In the early days the springs were fitted with the equalising lever, and in Mr. Manson’s 1888 design the tender instead of having side buffers was coupled to the engine by a central bar and rolling block - a plan more appreciated in America than in this country, where, in order to allow of as little play as possible between engine and tender, the side buffers are kept fairly well compressed.

It is remarkable that the ends of an engine are so seldom mentioned. Nowhere is the complicated structure of the wonderful machine more clearly indicated than on the footplate, but few are the references to the array of levers and gauges that enginemen have to manipulate; and some reference to the matter may not be out of place here, though attention can be directed only to the more important items.

The regulator is easily distinguished, though it has altered much in shape. To the right of it, as you stand on the footplate, is the vacuum pressure-gauge, with the boiler pressure-gauge corresponding to it on the other side. Between the two, and above the regulator, is the gauge lamp with the two whistles above it. Below the regulator, in the centre, is the water-gauge lamp, with the water-gauges right and left, the gauge no longer an unprotected tube but encased in a toughened glass box, the heights being indicated, in the Hulburd pattern, by diagonal slits cut in a white enamelled plate so that they are magnified by the water in the tube and look quite small and indistinct above the water-line.

Right and left of the water-gauges are the wheels of the combination injectors, and above, to the right of the right-hand one, come in due order the steam brake handle with the three-way cock some distance below it, the steam valve to the ejector with the steam valve for the small ejector below it, and then the vacuum brake valve handle, while the powerful reversing screw is unmistakable alongside it, the lever in the corner working the cylinder cocks. 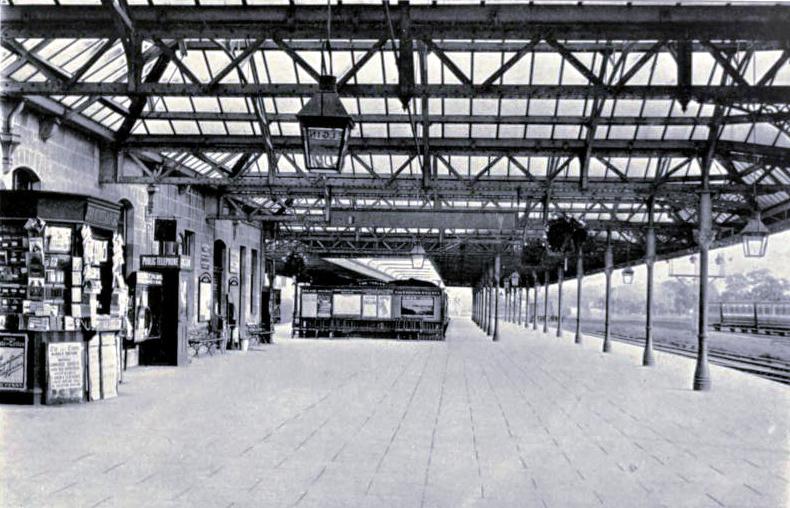 Above the left-hand injector are the coal-watering cock and the blower cock, the latter near the regulator; below the wheel are the overflow cock from the injector on the left and the feed cock on the right. Close to the fire-door screen on this side is the back damper handle, the front one being farther to the left, and almost on the floor is the water-cock from the feed-pipe to the ash-pan. Right and left on the floor are the sand-boxes; above the left-hand one is the trailing sand-box lever, the leading one being higher up. Farther up in the corner, level with the injector controls, is the sight-feed lubricator. We may have left out something, but altogether here is a nice lot of tools for two men to see to when the engine is in speed.

With regard to the front of an engine, the most interesting things are the lamps, now much simplified by the Clearing House Code. The disks are too numerous and varied to be dealt with except in detail, and the subject would require a long illustrated chapter devoted entirely to it.

The annual mileage of the Great North engines approaches 2¼ millions, of which 1½ millions represent its passenger traffic. Its goods traffic, besides cattle and sheep, consists largely of fish, as might be supposed from the number of fishing ports, large and small, with which it communicates round the coast; and its revenue decreases when the whisky trade is depressed, owing to the distilling industry being so important in the districts it serves. 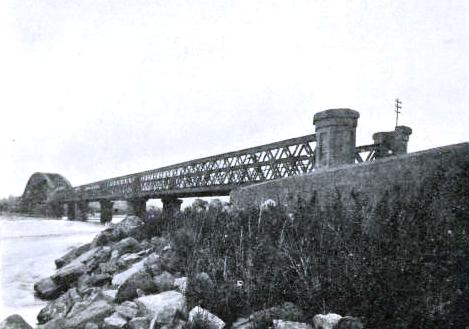 s already mentioned, it is almost entirely a single line. Few are aware that of the 20,000 miles of this island’s railways 7500 are single track. Our railways are not all double lines of 4 ft 8½-in gauge; just as there are one, two, three or more tracks in some instances, so there are no less than ten different gauges, ranging from the standard down to 1 ft 11½-in, of which there are no less than 63 miles; and the almost equally important loading gauge seems to range through every inch between 9 ft 6-in and 13 ft 9-in. On the Great North it is 12 ft 11-in.

THE BRIDGE OVER THE SPEY AT FOCHABERS.

The iron templates that show the loading gauges are seen hanging up across the siding at many stations. Not only has the middle height above the rails to be taken into consideration, but owing to the shape of the arched bridges and tunnels the height at the side and also the width have to be reckoned with. It does not do to run too close to the span of the gauge, as witness the story of the pantechnicon furniture van that cleared all the bridges going out loaded, and could only be brought back by a roundabout route when empty because the weight having been taken off the springs it was an inch higher at the shoulder. That was not on the Great North, for the springing of its lowest arch is 11 ft 3-in from the rail, thus giving its rolling stock a larger load margin than any other Scottish railway.

In 1856 its Aberdeen station was at Waterloo, that of the Aberdeen Railway (absorbed by the Caledonian in 1866) being at Guild Street, and between the stations was nearly half a mile of crowded quays. To fill the gap between Aberdeen and Kittybrewster the Denburn Valley line was made at a cost of £190,000, and Waterloo was left with the goods, the passenger work being transferred to the new joint station that inside is so very like the old Brighton at Victoria, the roof being almost exactly the same. Into it come not only the Caledonian but the North British, whose running powers bring it in all the way from Kinnaber, which is farther from Aberdeen than Reading is from London. 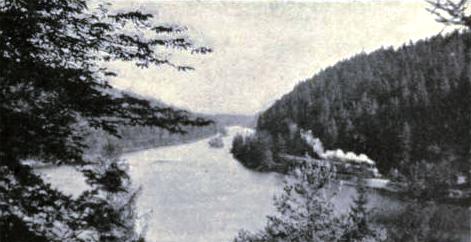 [From Our Home Railways by W J Gordon, published 1910]

You can read more on “The Highland Railway”, “Railways of Caledonia” and “Scottish Mountain Railways” on this website.