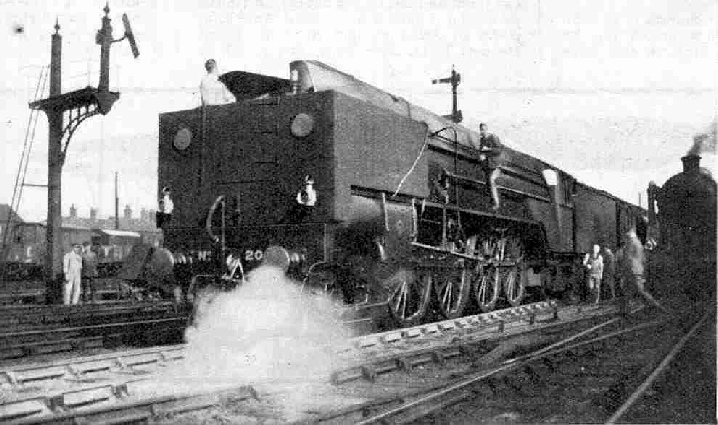 LNER Locomotive No. 2001, “Cock o’ the North”, at Peterborough during a trial run. The engine is fitted with an indicator shelter and a dynamometer car is coupled to the tender.

READERS were promised an account of a footplate trip on “Cock o’ the North”, the magnificent 2-8-2 express engine recently introduced on the LNER. Up to the time of writing it has not been possible to make such a run over the difficult route between Edinburgh and Aberdeen for which “Cock o’ the North” has been specially designed, but we are able to give a description of a test journey from King’s Cross to Doncaster carried out during an extensive series of trial runs in both directions on this section of the LNER main line.

A preliminary test was made on Tuesday, 19th June 1934, when the engine hauled a specially made up train with the enormous weight of 650 tons from London to Grantham and back with great success. During the first week in July, a series of “full dress’’ trials were carried out. Each day the engine worked the 11.04 a.m. up Yorkshire Luncheon Car express from Doncaster to London and returned on the very heavy 4 p.m. train, which carries in addition a portion for Grimsby and Cleethorpes.

On these journeys every single feature of the engine’s working was under the closest observation. Steam indicators were fitted to the cylinders for measuring the horse power developed. A shelter was erected round the smoke-box to protect the men riding right out on the front of the engine for the purpose of taking the indicator diagrams - mighty hot work with the thermometer at 80 in the shade!

Immediately behind the tender, in front of the ordinary passenger coaches, was coupled the dynamometer car. This marvellous vehicle is a completely equipped engineering laboratory on wheels. Under the floor is a strong spring, one end of which, called the “live” end, is attached to the tender coupling. Acting just like a great spring balance, it measures the pull exerted by the engine To start a 650-ton train from rest, “Cock o’ the North” exerted a pull of about 16 tons, while the pull when travelling at 60 mph was as high as six tons at one point. A system of delicate levers operated by this spring work a pen that makes a continuous record of the pull on a seemingly endless roll of paper. The rolls on which this paper is wound are driven directly oft the wheels and thus the paper is passed underneath the pen at a speed proportional to that of the train. A similar roll chart is used for continuously recording the speed, the pen in this case being driven by an electric clock.

Many other quantities are measured, among them the amount of coal, oil and water used and the temperature of the steam at various points Even the exhaust gases in the smoke-box are analysed.

During the interesting test week I travelled with “Cock o’ the North” on a run with the 4 p.m. express from King’s Cross, and witnessed a magnificent performance the load consisted of 16 bogie coaches and the dynamometer car, weighing 548 tons empty and 585 tons with passengers and luggage. No attempt was made to break records the object of the test was to work the train to schedule time in the most economical manner.

We made a fine start. From King’s Cross the line rises steeply at 1 in 105 out to Holloway, yet “Cock o’ the North” passed the top of the rise, 1¾ miles out in 5¼ minutes. By Finsbury Park, still climbing, the speed had risen to nearly 40 mph and the short slightly downhill “breathing space” to Wood Green quickly brought speed up to 54 mph before we tackled the mile climb at 1 in 200 to Potters Bar. At Holloway the cut off had been brought down to about 25 per cent , and through Wood Green it was only about 15 per cent. In fact, it was only when we were halfway up the Potters Bar bank that cut-off was advanced to about 20 per cent and with this really easy working the sustained speed on the 1 in 200 was 44 mph - with a 585 ton load! The exhaust beat was quite sharp and clear, but that is largely due to the poppet-valves, which permit of a very rapid and somewhat explosive exhaust.

Thus we passed Potters Bar, 12¾ miles, in 20¼ minutes, and here the cut-off was brought back to about 10 per cent. Throughout the rest of the journey I never heard the exhaust. We reached 67 mph through Hatfield and mounted the Woolmer Green bank at a minimum of 50 mph, but on approaching Hitchin signals at danger were sighted and the momentary slackening before they were pulled off caused a slight loss of time.

Still working on 10 per cent cut-off, some very fine running now followed. Speed rose to 72 mph through Biggleswade and then the engine maintained a rate of 69 mph on the dead level past Tempsford for mile after mile, a remarkable feat on such an early cut-off. The slight rise through St. Neots did not bring the speed below 65 mph, and we were travelling at 70 mph again at Offord.

The engine was now blowing off steam furiously, showing full boiler pressure, and this despite very easy firing. For Stukeley Bank, nearly four miles at 1 in 200, cut-off was advanced to 15 per cent. We simply stormed up, going over the top at 54 mph with steam still blowing off. Back came the cut-off to about 10 per cent , and we ran down the Abbots Ripton bank at 73 mph.

Now came a most extraordinary feat. When we reached the level at the foot of the bank, steam was shut off altogether, as we were well on time, and the valves were put into mid-gear. We ran like this for five miles on the level and at the end of these miles were still running at 54 mph!

A long slowing to 30 mph for permanent way repairs was in force through Yaxley, but we came into Peterborough, 76½ miles from King’s Cross, in 85 minutes, the net time being about 82 minutes.

Perhaps the finest feat yet achieved by the engine is a “flying” ascent of Stoke bank, the 10 miles of this incline, with a gradient of 1 in 200 to 1 in 178, being climbed at a minimum speed of 56½ mph with 650 tons! The engine’s remarkable hill-climbing ability will be of incalculable value on the Edinburgh to Aberdeen route, and we hope to include in an early issue an account of a footplate trip on this service.

“Cock o’ the North” is the first eight-coupled locomotive built for express passenger service in Great Britain. This three-cylinder 2-8-2 engine was also the first ordinary type engine on a home railway to have a streamlined contour. In working order “Cock o’ the North” weighs 110¼ tons and the tender 55¼ tons.

You can read more on “Cock o’ the North”, “How Engines are Tested” and “Testing a Locomotive” on this website.