How Engines are Tested 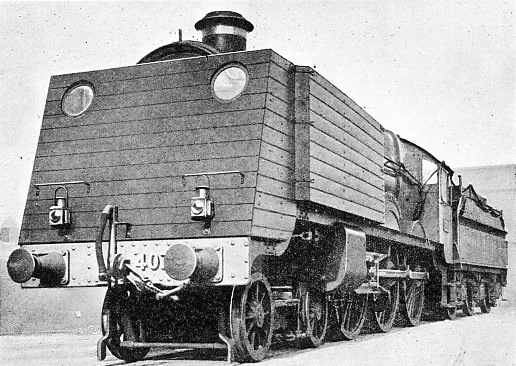 WHEN a railway has turned out a new type of engine, an early experience the first locomotive of the class has usually to undergo is a very thorough series of tests. The boiler has been tested under its full working pressure of steam, and some-thing over, before it was mounted on the engine frame at the locomotive works. Then, when the engine is at last complete, there comes its first test under steam; and this consists in taking it for a twenty-mile spin, or thereabouts, down the line from the works and back again. 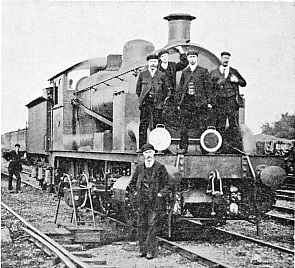 The “trial trip” is made with workmen hanging on all round, as you can see in the picture; they are armed with large oilcans, and charged with seeing that no part of the machinery “runs hot”, or develops any other kind of trouble. It is not until this trial is over that the engine goes into the paint-shop, to exchange its rough lead-coloured livery for the beautiful coat of paint with which you are so familiar.

Later on there come some further and more important tests. Possibly you have, at some time or another, seen an engine with the front all boxed in, as in the case of the big Great Western engine, “Caldicot Castle”, at the head of this chapter. This shows that the locomotive is in course of being “indicated”. Indicating consists in obtaining curious boot-shaped diagrams on paper, which to those who understand them show exactly what is going on in the cylinders of the engine. The diagrams are drawn by the actual pressure of the steam in the cylinder, in a way that is a little too complicated to explain to you simply. 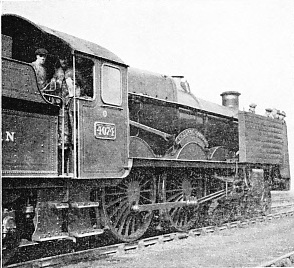 The man who has charge of the indicating apparatus must be protected from the wind and the weather, as he rides on the front of the engine, and so these fine shelters are now erected to make him as comfortable as possible. The idea of indicating the engine is to see whether it is really working as efficiently as it has been designed to do.

“CALDICOT CASTLE” READY FOR THE TESTS.

Other very important tests require the use of what is called a dynamometer car; you see some of the recording apparatus inside the Great Western car in the picture below. The chief object of this remarkable coach is to record exactly the “pull” exerted by the engine as it starts and draws along its train. So the hook of the car, to which the coupling of the engine is attached, is connected to a most complicated mechanism under the dynamometer car, which, by moving a pen, has the effect of drawing an unbroken line on a long roll of paper all the way through the journey. 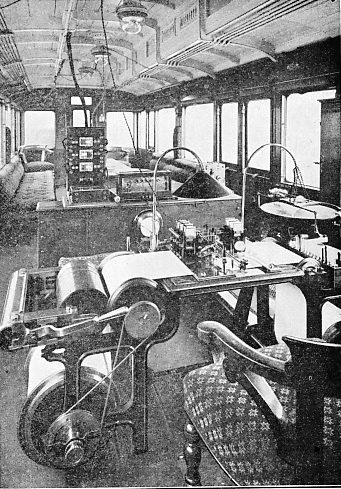 The paper itself is slowly unwound by clockwork, and many kinds of other ingenious devices are used to mark on the paper all the mile-posts and stations passed, so that the exact work done by the engine at each point may be known, and various other records that are required. In the latest types of dynamometer car up to a dozen pens in all are used to make their different marks upon the long roll, each teaching its own lesson about the “performance” of the engine. The lessons thus learned are put into practice in later designs, so that the locomotives of to-day are always becoming more powerful and more efficient.