Goods Trains and Their Working

THERE are various kinds of goods trains. The wayside goods stops at every little station in order to pick up and drop its wagons, and takes many hours over its journeys; on the other hand the “express freight” trains, which mostly run in the night, are in these days often timed at speeds but little short of the express passenger speeds to which the passenger is accustomed. This applies especially to fish, and other “perishable” traffic, which has to be carried in wagons fitted with the same “continuous” brake as the passenger coaches, so that the driver may be able to pull his train up readily. Otherwise, such high speed would be dangerous.

In the ordinary goods train, although each truck has its handbrake, such brakes can only be used in shunting, as there is no means of getting at them when the train is in motion. So the only brake-power then available is on the engine and tender, and on the guard’s van at the back, which explains why a goods train takes so long to pull up.

Notice the two “banking” engines, one in the middle and one at the end of the train

Americans sometimes laugh at our “toy” wagons; as they call them, but it has been proved by experience that, for the small consignments and short “hauls” of this country, the four-wheeled wagon has its advantages. Efforts are being made in this country, however, to get the users of the wagons to agree to the employment of wagons of higher capacity.

The Great Western Railway, for example, has introduced the all-steel wagon on the right-hand of the picture below, and is offering specially cheap rates for carrying their coal to the collieries that agree to its use in place of the smaller standard type of wagon on the left. The big wagon takes 20 tons of coal, and the smaller at most 12 tons; so in every 10 tons’ weight of coal carried, 11 tons’ weight of truck is saved, which is a considerable figure on a big train.

THE OLD AND THE NEW ON THE GREAT WESTERN RAILWAY

All the freight wagons used in America are carried on eight wheels, and capacities of 50 and 60 tons are common. Similar wagons are coming into use in India, as you can see in the picture below. On certain American lines carrying a heavy coal traffic for shipment, wagons up to even 100 and as much as 120 tons capacity, carried on 12 wheels, have been built. “Bogie” goods wagons have also been built in this country, and familiar examples are the 50-ton Great Northern wagons which have been built to deliver bricks from the big brickyards round Peterborough.

A 2000-TON GOODS TRAIN ON THE GREAT INDIAN PENINSULAR RAILWAY

The photograph below shows how goods trains are “sorted” in the big marshalling yards, according to the destinations of their wagons.

ONE OF THE “HUMPS” IN FELTHAM YARD

Each train is pushed slowly over the “hump” in the track, which can be seen in the distance; at the top of the hump the wagons are uncoupled one by one, and roll quickly down a short gradient to the beginning of the “gridiron” of sidings, where each wagon is deftly turned by the hand-points into its own road.

WAGONS RUNNING OFF A “HUMP” AT FELTHAM

Every siding represents a different destination, or collection of destinations, and by this method of sorting the trains, much time and labour in shunting is saved. 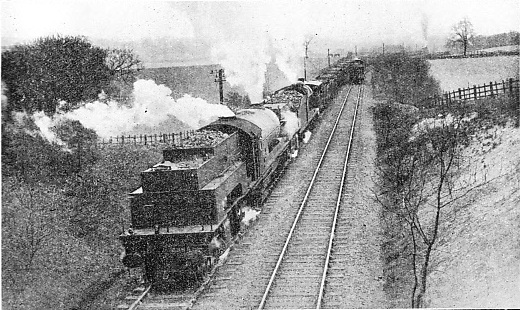 You can read more on “The Railway Takes All”, “The Railways’ Daily Work”, and “Sorting Goods Wagons” on this website.