A Famous Train of the Southern Railway

WHAT an extraordinary revolution has taken place in railway travel in the south-east of England in the last twenty years! At the beginning of the present century the South Eastern and London, Chatham and Dover lines were the butt of every humorist who wanted to make capital out of our railways. For slow, late and uncomfortable running the South Eastern was held on all hands to have few rivals, and not, it must be admitted, without some reason; but to-day all that is totally changed. On such trains as the 80-minute Folkestone expresses, which form the subject of our study, you may witness some of the fastest railway travel in England. Up-to-date Pullman cars and comfortable corridor coaches make up the trains and you can have meals and light refreshments brought to you wherever you sit.

Since the war, while the great trunk lines to the North of England have been content, in the main, gradually to restore their pre-war speeds, the Southern has established, especially in its Eastern territory, scheduled train-speeds considerably faster than any previously attempted. So the time between London and Folkestone has been brought down successively to 90, to 85 and now to 80 minutes by the best expresses.

The distance from Charing Cross to Folkestone Central is almost exactly 70 miles, giving an average booked speed of 52½ m.p.h. from start to stop. But when allowance is made for the slow exit round all the sharp curves from Charing Cross to London Bridge, for the congestion of the suburban area, for the tremendous climb from New Cross to Knockholt and, last of all, for the severe slack round the curve through Tonbridge Junction just when the speed ruling is high, it will be seen that there is no time to spare. In fact the average rate over rate over the dead straight and well-graded 40½ miles between Tonbridge and Folkestone must be round about a mile-a-minute throughout, if time is to be kept, and the maximum speeds must be considerably higher than this.

While the speed of these trains has been going up, so the weight of them has been constantly on the increase also. The latest 32-ton corridor coaches have now been introduced, seven of which, in addition to the Pullman car, of between 33 and 40 tons, make up at least 255 tons behind the tender. If an additional coach be added, the total is over 300 tons. This is a truly formidable task of haulage for the 4-4-0 locomotives invariably employed. Until 1927 these were generally of the large-boilered “L” class, introduced just before the war and numbered between 760 and 781; they were of special note in that 10 of them were built by the German firm of Borsig, at their Tegel works in Berlin. But last summer saw the advent of the new and more powerful super-heater “L” locomotives, of Mr. Maunsell’s design, which are now doing first-class work on these trains.

There are actually four trains timed to make the 80–minute run between Charing Cross and Folkestone. The 4.15 p.m. and the 7.15 p.m. are the two down expresses so booked, and the two up trains leave Folkestone Central at 11 in the morning and 5.10 in the evening. The 9 o’clock up makes London Bridge in the same time, but in this case, of course, the distance covered is not quite so great. As most of our journeys in these articles have been made from London, it will be somewhat of a novelty to take the up journey for once, and we will therefore imagine ourselves at the Central Station at Folkestone somewhere about 5 o’clock in the evening ready to make the dash for town at 5.10 p.m.

Part of the train we shall find already waiting in the bay platform, consisting probably of two corridor third-class brake coaches and a first and third corridor “composite”. Immediately afterwards at 5.2 p.m, the Deal and Dover portion arrives. It has actually started its journey at Ramsgate at 3.38 p.m, and has come slowly round the coast over a curved and steep section of line with many stops, through Sandwich, Deal and Walmer to Dover, and thence right alongside the sea, threading a number of long tunnels and up through the Warren to Folkestone. The Pullman car is next the engine, with four corridor coaches behind it; but after the engine has been into the bay to fetch the Folkestone portion, the car is in the centre, with the coaches on either side vestibuled to it. Prompt to time at 5.10 p.m. we are away.

Parallel tracks, south of London Bridge, Southern Railway. The Folkestone 80-minute expresses use the lines on the right-hand side.

Some tremendously fast running lies immediately ahead of us. From Folkestone to Tonbridge the distance is 40½ miles, but according to the timetable we must pass Tonbridge Junction at 5.51 p.m. – that is, 40½ miles in 41 minutes from the start. To make matters more difficult, we have ahead of us, for five miles out of Folkestone to just beyond Sandling Junction, a continuous rise at 1 in 264. But all the way up this we shall find our engine steadily accelerating, and we shall probably get through Sandling, 4½ miles, at a speed of between 40 and 45 miles an hour, in some eight minutes from the start.

Now the galloping begins. There is a gentle down gradient from Westenhanger to Ashford, not steeper than 1 in 266 at any point, but the speed will rise until, probably we are well above the “70” line, and our headlong dash past the locomotive works and through Ashford Junction will be thrilling indeed. Then follows a faint rise to a siding called Chart, after which are further faintly falling grades to Pluckley, and gentle ups-and-downs over the perfectly straight course onwards to Paddock Wood. Along here we shall reel off mile after mile at round about 70 miles an hour. On one fairly recent occasion, in fact, I timed one of the new “L” class engines, with a 340-ton train, to cover the 29.3 miles from Westenhanger to Paddock Wood in 24 min. 55 sec., which represents and average rate of 70.6 m.p.h. over the whole of this distance. On the run in question our speed rose twice to 76½ m.p.h, and we actually passed Tonbridge, 40½ miles in 39 mins. 40 secs, from the start.

From Paddock Wood there is a rise towards Tonbridge, and immediately we have breasted it there comes the shutting off steam and the slowing for Tonbridge Junction, to 35 m.p.h. It could not come at a worse place, as we want all the impetus we can get here for the tremendous climb that follows immediately, up to Sevenoaks. For four miles, past Hildenborough to the mouth of the tunnel, it is at 1 in 122, and then, through the two miles of the tunnel itself, there is an easing of 1 in 144. On the ascent the speed will gradually fall, until we shall enter the tunnel, probably, at a little under rather than over 30 m.p.h., and shall maintain this same speed, roughly, up to the tunnel exit.

Rapidly we gather speed through the deep chalk cutting to Sevenoaks Station and onward to the bottom of the valley between there and Dunton Green, where climbing recommences. This final stretch of the ascent to Knockholt (two miles at 1 in 143), is not quite so steep as that from Tonbridge. After having touched about a mile-a-minute between Sevenoaks and Dunton Green, we shall clear the 1½ miles of Polhill Tunnel and breast the summit, in the chalk cutting just before

Knockholt Station, at about 40 m.p.h. or slightly over. Although we have covered the 36 miles from Sandbridge to Ton-bridge in 33 minutes or so, we shall find that the 7½ miles from Tonbridge up to Sevenoaks have taken 12 minutes, and the 5½ miles from there on to Knockholt 6½ or seven minutes. For the remaining 16½ miles on to Charing Cross, there-fore, we have at most some 20 minutes left.

But the engine’s hard work is pretty well over. All the way to New Cross we have now falling, and for the most part steeply falling grades ahead, though the driver dare not make full use of his opportunities, owing to the shortness of the signal sections and the possibility of signal checks in the congested suburban area we have now entered. We shall “ease” over the junctions at Orpington, but on the steepest part of the descent, from Elmstead Tunnel down to Hither Green, it is possible we may again exceed 70 an hour before the enforced slowing over the curve through St. John’s.

If we are lucky, we may get through to Charing Cross without a signal check, but so crowded with trains is this maze of lines that it is hardly surprising if we fail to get an absolutely clear road. Still, our driver will probably contrive to keep his train on the move, without any stop or very severe slowing, though the curves between London Bridge and Charing Cross are so sharp that they must be negotiated with caution. So we roll over Charing Cross Bridge, and we may expect duly to come to rest at our platform at 6.30 p.m.

Although we have probably done enough travelling for the day, our train has not, and three-quarters-of-an-hour later another “L” class engine will be starting the same set of coaches on a return 80-minute dash to Folkestone. All credit to the Southern for such enterprising timings in difficult running conditions.

The problems that confronted the Southern Railway at the inception of the grouping scheme were enormous. All through the war years, and for a considerable period afterwards, its tracks and rolling stock had borne the strain of carrying men, munitions and war equipment of all kinds to and from the embarkation ports, and complete reconstruction was essential. For a time all appeared to be confusion, but gradually the bold policy adopted proved successful. Considerations such as these make the running times of the “Folkestone Flyer” all the more meritorious. 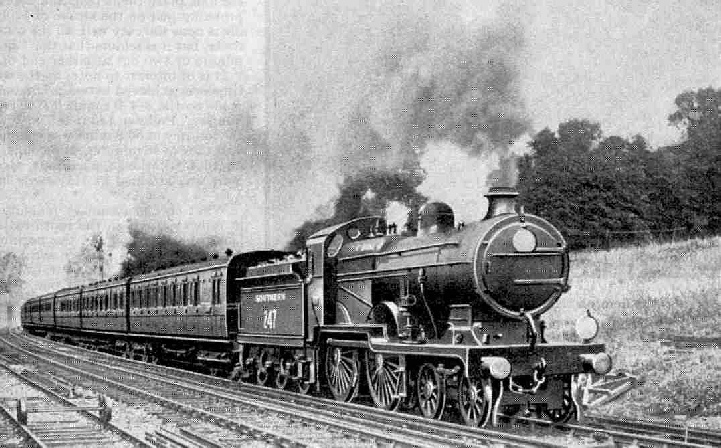 You can read more about “The Dover Pullman Boat Express” , “The Golden Arrow” and “The Southern Belle” on this website.