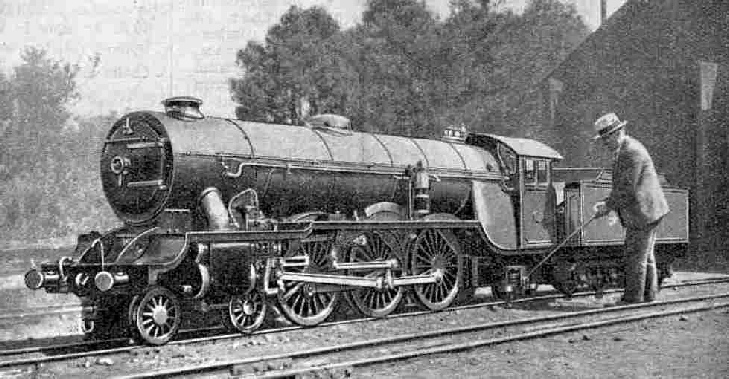 FOLLOWING the recent exchange of locomotives by the London and North Eastern and Great Western Railway Companies, an interesting series of trials of the largest working model locomotive yet built were made on the 15-in gauge line that runs between Ravenglass and Eskdale in the Cumberland mountains. The new locomotive is a “Pacific” type model, the external design of which is similar to the LNER 4-6-2 type “Flying Scotsman” exhibited at Wembley, and to that tried on the Great Western hauling the “Cornish Riviera” express. The model is one-third full size and is nearly 25 ft in length. It is one of two locos designed by the writer, for Captain J. E. P. Howey, the well-known racing motorist, and was built at the works of Messrs. Davey, Paxman & Co. Ltd, Colchester.

The main idea in adopting so large a scale has been to obtain perfect “cab comfort”. The loco is large enough to carry two men seated below the cab roof. Speed was considered as well as hauling power, and extreme care was exercised to eliminate all out-of-balance periods.

The Eskdale track abounds in steep gradients and sharp curves and therefore a high average speed is not possible. Notwith-standing this, 35 miles per hour was attained over one part of the line without any extreme effort on the part of the loco. When a suitable railway is available a speed of 40 miles an hour is confidently expected. The load test was a stone train of 34 tons gross. This would represent in a full-size loco a train weight of 918 tons, which is 50 per cent, more than the heaviest load ever put behind the prototype of the engine. Altogether, owner, designer and builder are very well satisfied with the results obtained during the trials. 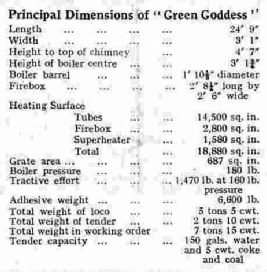 The loco has two outside cylinders of 5¼-in bore by 8½-in stroke with 3-in piston valves. The motion - that is the connecting rods, coupling rods and other moving parts - is made of high-grade nickel steel, every means being taken to make these details as light as possible. The balance is therefore excellent and not the slightest vibration was observed at top speed. The coupled wheels are 25½-in in diameter, the bogie trailing and tender wheels being 12-in in diameter. All the wheels are of cast steel, the coupled wheels having separate tyres.

The valve gear is the complete Walschaerts type, the primary motion being taken from a return crank on the driving crank pin. The reversing lever in the cab can be operated by a direct push and pull with a screw “vernier” adjustment, and at the trials it was found practicable to haul a heavy train with the gear linked up to give a valve cut-off of 35 per cent, of the stroke.

The tender runs on two boxes with equalised axle-boxes and duplex springs. In order to allow the enginemen to sit as low as possible, a well is sunk in the front part of the floor of the tender to accommodate their feet and legs below footplate level.

The brake arrangement is unique, both the vacuum and the Westinghouse air pressure brakes being fitted to the engine and tender.

The cab fittings include two water-gauges, vacuum brake gauge, steam pressure gauge, two Westinghouse air brake gauges and a steam-chest pressure gauge that indicates to the driver how much steam he is letting into the cylinders. The whole of the operating gear in the cab is in front of the driver. 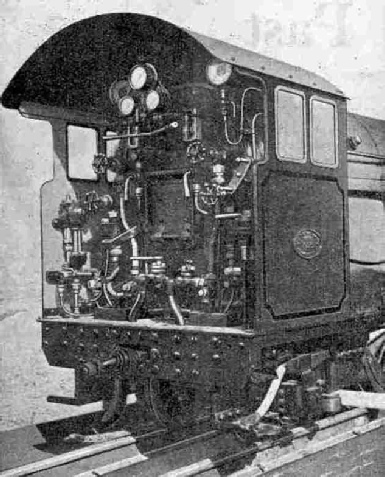 The loco is painted the standard “Great Northern” green, with black and white lining, the cylinder casing and footplate edgings being painted a deep red with yellow lining.

The Cab of the Model “Pacific” Loco, “Green Goddess”.

The loco is named the “Green Goddess”, and its appearance on the Eskdale Railway created a great amount of interest among the holiday visitors using the line.

The “Green Goddess” will traverse curves of 120 ft radius, and if a similar model were used on the Eskdale line trains of 250 passengers could be operated regularly. Possibly the results of the trials may induce the management of the Eskdale Railway to adopt locos of the same type.

The ordering of the “Green Goddess” and her sister loco “Northern Chief” was the direct result of a visit of the late Count Louis Zborowski and Captain J. E. P. Howey - both well-known Brooklands motor racers - to Eskdale in the summer of 1924. The visit was made for the special purpose of inspecting the then new Eskdale Railway 2-8-2 type loco, “River Esk”, built at Colchester, and comparing it with the pre-war model quarter-size locos running on the same line. There was no doubt whatever about the superiority of the larger one-third size loco in power and comfortable driving, and in the general workmanlike style in which it handled traffic.

On a small railway like the 15-in gauge Ravenglass-Eskdale line, the limitations of loading gauge are not present as is the case on a full-size railway. There are no tunnels or bridges to clear, and the use of a scale of 4-in instead of 3-in to the foot.

embodied in the “River Esk”, “Green Goddess” and “Northern Chief”, is equivalent to using the American loading gauge, or more strictly speaking that employed by our South African railway engineers. In South Africa the standard gauge is 3 ft 6-in, but many of the locos are quite as big and powerful as, if not more so than, the average loco used on the 4ft 8½-in gauge in this country. 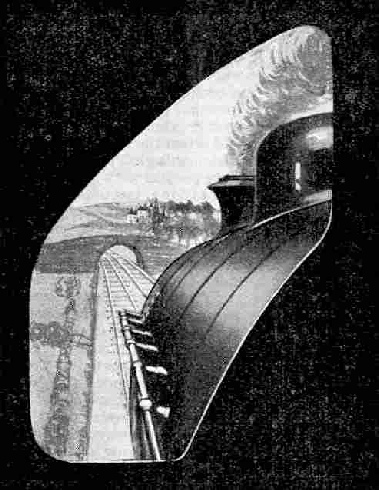 The larger scale of course produces a bigger and heavier engine - 8 tons as against 3 tons - but this tends to make the loco steadier in running as well as capable of hauling a full load with greater ease. Cab comfort, which has been mentioned already, is also a very important item in all these three new 15-in gauge locos. The more spacious cab and the fitting of a well in the tender for the feet allow the engineman to sit down and look through the cab windows in proper style. In the older models the driver was perched up above the cab and was annoyed both by the smoke and by the steam from the safety valve.

The Driver's View from the Cab and Window of the “Green Goddess”.

In these engines the cab is big enough for the seated engineman to look through the window ahead.

The “Green Goddess” and the “Northern Chief” represent perhaps the nearest approach to the “real thing” that has ever been attempted in model locomotive engineering. It should be added that, owing to the death of Count Zborowski, Capt. Howey now owns both these locos.

The Eskdale Railway, upon which the trials of the “Green Goddess” took place, was formerly the Ravenglass and Eskdale Railway, opened on 24th May 1875. The line failed to pay its way, traffic came to an end, and for a considerable time it remained abandoned and derelict. On 24th July 1911, the present company was incorporated and the line was re-laid on the 15-inch gauge and reopened on 20th August 1915.

To-day the Eskdale Railway not only carries a steady stream of passengers, but also hauls coal, food and other stores to the villages through which the line passes, besides conveying His Majesty’s mails. In short, in spite of its small size this line is thoroughly capable of earning its own living and it has attained the dignity of having the times of its trains recorded in “Bradshaw”.

You can read more about “The Festiniog Railway”, “Miniature Railways” and “Model Railways” on this website.