The Story of the “Atlantic”

The 4-4-2, the First Notable Development in the Contemporary History of the Locomotive for Passenger Traffic and its Evolution

This locomotive was built by Baldwins’ to the order of the Philadelphia and Reading Railway, with the view of exceeding the speed obtained from the “American” type. This object was attained and the type developed into the world-famous “Atlantic”.

IN 1885 the Philadelphia and Reading Railway obtained control of the Philadelphia and Atlantic City Railroad. At that time the latter was little more than a seaside village, though only 55½ miles from the busy city of Philadelphia, but the connecting steel highway was only of narrow gauge. The new owners, realizing the opportunity to convert the hamlet on the Atlantic seaboard into a popular summer holiday resort and residential centre for Philadelphians, embarked upon a comprehensive modernization scheme. The single narrow gauge track was torn up, the right of way widened, curves and banks eased as far as practicable, and a new standard gauge double track of the highest grade was built. A number of 4-4-0 locomotives were ordered to inaugurate the new express service, and, in 1888, the two points were brought within 85 minutes’ travel, including the ferry between Camden, the terminus on the east bank of the Delaware River, and Philadelphia, which occupied 10 minutes. As the road-bed settled down it became possible to accelerate the service to 80 minutes in 1889; 75 minutes in 1890; and, finally, to 70 minutes, including the ferry trip in each instance. In the last-mentioned record this left 60 minutes for the 55½ miles’ run from Camden to the coast.

This excellent train service attracted traffic. Atlantic City became the seaside residential centre for the business men of Philadelphia in precisely the same way as Brighton and Southend serve the purposes of London’s commercial classes. During the summer season, owing to the popularity of the resort, the trains were often crowded to excess, but their length and weight reacted against the maintenance of the time schedule to the degree desired by the railway company.

Experience tended to prove that the limitations of the “American” type of engine had been reached. The railway company

became convinced of the possibility of reducing the timing between the two points to the hour, if only a sufficiently powerful high-speed engine were forthcoming. Accordingly it approached the Baldwin Locomotive Works to ascertain if a unit could be evolved to satisfy its demands.

The solution of the problem lay in the provision of a large boiler with ample heating surface for easy rapid steaming to meet high-speed requirements, as well as a firebox of liberal proportions and specific form with ample width and depth. To solve these problems the four-coupled driving wheels were set forward of the fire-box, and underneath this was placed a trailing axle, the four-wheeled leading truck, of course, being retained. In this way it became possible to set the boiler lower than was practicable in either the popular “American” or “Ten-wheeler” type, the wheel arrangement reading 4-4-2.

Built in the company’s workshops at reading, this type made its appearance in 1915. The engines are notable for their unusually large grates, which have an area of 108 square feet. The working pressure is 215 lb per square inch.

The trials with this locomotive proving satisfactory, the railway company decided to launch a sixty minutes’ schedule between the city and the coast, inclusive of the 10 minutes required for the ferry, and instructed the Baldwin company to build units of sufficient power to cover the 55½ miles in 50 minutes with a train of six cars - a dead weight of 365,000 lb - or a train of eight cars weighing 487,000 lb, exclusive of passengers, in 60 minutes.

The two engines, built in 1896, were of the same wheel arrangement, but were of the Vauclain compound type, with the diameter of the high- and low-pressure cylinders 13 and 22 inches respectively, by 26 inches stroke. The grate area was increased to 76 square feet, though the total heating surface was reduced to 1,835 square feet. The boiler pressure was raised to 200 lb per square inch; the drivers by 12¼ inches to 84¼ inches diameter; and the total weight of the engine to 142,900 lb, with 78,600 lb imposed upon the drivers, and registering a tractive force of 14,400 lb. These engines differed from their prototype in that the Wootten boiler was favoured, with the driver perched over the driving wheels, whereas in the first of the type he was accommodated in a cab set behind the drivers in the usual manner.

These two compounds proved exceptionally speedy in the trials, developing on test as much as 1,450 horse-power at 70 miles an hour. The sixty minutes’ non-stop service was inaugurated on July 1, 1897, to create a sensation among loco-motive engineers throughout the world. The train ran daily, except Sundays, throughout July and August, and was never once late. Out of 52 runs it arrived ahead of time on 51 occasions, notwithstanding that it never left Camden once on schedule - 3.48 pm. The average running speed from start to stop exceeded 68 miles an hour on 45 days; the fastest timing was made on July 14 with a train of five cars carrying 25 passengers, when the 55½ miles were covered in 462 minutes, representing an average of 71·6 miles per hour. Even this record was eclipsed on the opening day of the following season with a train composed of five passenger, and one combination, coaches, carrying 201 passengers, and representing an approximate weight of 410,000 lb behind the engine, when the journey was made in 45½ minutes, at an average speed of 73·6 miles per hour.

THE FIRST BRITISH “ATLANTIC”, BUILT FOR THE GREAT NORTHERN RAILWAY (1898)

Total weight of engine ready for the road is 134,400 lb. Its boiler barrel is 56 inches in diameter by 152⅝ inches in length; the fire-box 96 inches long by 48½ inches wide. The driving wheels have a diameter of 80 inches.

From the circumstance that the 4-4-2 demonstrated its possibilities upon the Atlantic coast division of the Philadelphia and Reading Railway, this type of engine was appropriately called the “Atlantic”, the name by which it is popularly known throughout the world.

The new design was pioneered in Great Britain by the Great Northern Railway in 1898, though hard on its heels came a more powerful expression of the same design from the Lancashire and Yorkshire Railway, which proved so successful over one of the most difficult lines in the country, crossing as it does the Pennine Range, as to lead to the immediate construction of fifty additional units of this class.

THE FIRST “ATLANTIC” BUILT FOR THE LANCASHIRE AND YORKSHIRE RAILWAY

The most notable feature is the large boiler which led to the popular nomenclature of “Big-bellied Beastie”.

This locomotive excelled in essential dimensions and power the pioneer British “Atlantic” built by the Great Northern division of the London and North Eastern Railway. The cylinders were 19 inches in diameter by 26 inches stroke inside, connected to driving wheels 87 inches in diameter. The heating surface of the tubes was 1,361 square feet, and of the fire-box 161 square feet, giving an aggregate of 1,522 square feet; the grate area was 23 square feet; while the working pressure of the boiler was 180 lb per square inch. The wheel-base of the engine was 27 feet 9 inches; total wheel-base of engine and six-wheeled tender 48 feet 1 inch; and overall length 57 feet 4¼ inches. The tender had capacity for 2,290 gallons of water and 11,200 lb of coal. In working order the complete locomotive weighed 200,260 lb; of this amount the engine represented 131,600 with 39,200 lb on each driving axle. At 80 per cent, boiler-pressure the tractive effort was 15,535 lb. In the construction of this engine the boiler dimensions were carried to such, an advanced degree over prevailing British practice, that the Lancashire and Yorkshire “Atlantics” became picturesquely, if unconventionally, styled as “Big-bellied Beasties”.

THE FIRST BRITISH “ATLANTIC”, BUILT FOR THE GREAT NORTHERN RAILWAY (1898)

Once the “Atlantic” had established its value for high-speed duty its development proceeded at an amazingly rapid rate. This was forced upon the companies; the moment they could offer the public accelerated facilities traffic increased, leading to heavier train loads which, in turn, demanded more powerful engines to move them at the recognized speeds.

The Philadelphia and Reading Railway found it particularly difficult to keep abreast of traffic in regard to its motive power. After accelerating the journey between Atlantic City and Philadelphia to the 60 minutes, it essayed to speed up its expresses plying between Philadelphia and Jersey City (90 miles) in order to secure its share of the business flowing between the “Quaker City” and New York. The forward strides in regard to motive power were taken approximately at three-year intervals, to culminate in the huge “Atlantics” - built in the locomotive shops of the railway at Reading - which made their appearance in 1915. These are notable for their unusually large grates, which have an area of 108 square feet. Although these machines have boilers of the Wootten type, with combustion chambers, the cab is returned to the familiar position at the rear, instead of perpetuating the “Mother Hubbard” design. There has also been a reversion to simple working, the cylinders having a diameter of 23·5 inches with a stroke of 26 inches. The total water-heating surface is 2,493 square feet, and the superheating surface 677 square feet, while working pressure is maintained at 215 lb. The driving wheels are 80 inches in diameter and carry 129,200 lb of the 231,900 lb total weight of the engine. The tractive force is 32,800 lb. 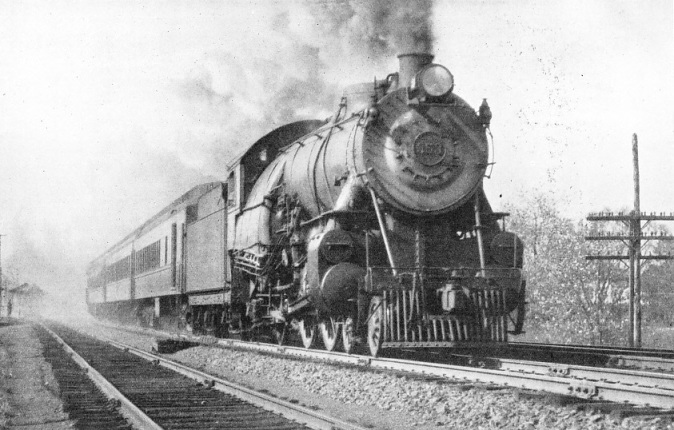 THE TRIUMPH OF THE “ATLANTIC”

[From Railways of the World by Frederick A. Talbot, published 1923]

You can read more on “The Coming of the Ten-Wheeler”, “From the Atlantic to the Pacific”, “Giant American Locomotives” on this website.