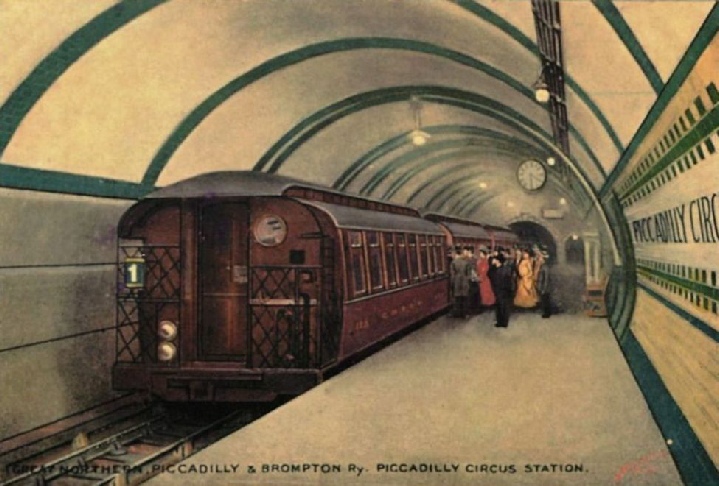 THE Metropolitan, with which the Great Central was in such close alliance when it first came to London, was opened from Bishop’s Road to Farringdon Street in 1863. It was the boldest railway venture up to then undertaken; and its construction was as delicate as a surgical operation, owing to the network of pipes and drains beneath the streets amid which it had to be driven in its cut-and-cover advance. It quite swept away the prejudice against tunnels, and never afterwards did we hear of reports as to the salubrity of this or that railway through a hill, though never, before or since, was such an atmosphere provided for passengers.

Its first Act was obtained in 1853 when it was to be the North Metropolitan, the Act of the following year changing its title by the omission of the North, and it was to run from Paddington to the General Post Office. The proposed City terminus was very soon shifted to Farringdon Street, and the Great Western in consideration of the advantage of getting into the City subscribed £175,000 of its capital. To suit the Great Western it was laid with the mixed gauge, broad and narrow, but, as the Great Western worked it, only the broad gauge was used, until, as already related, the quarrel took place resulting in Sir Myles Fenton and Mr. Sturrock proving too many for the Paddington directorate. 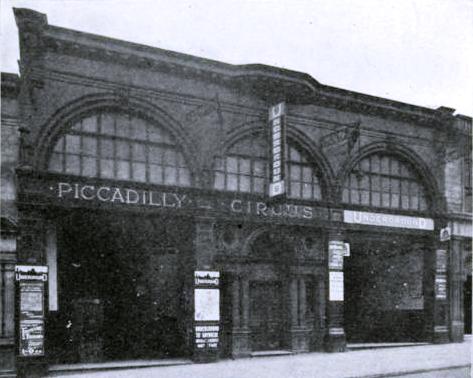 The Act required it to be worked without its atmosphere being polluted with steam or smoke, and Sir John Fowler designed for it the strangest locomotive on record to comply with these provisions. This was the hot-brick engine. There were to be boilers at each end of the line to boil the water, and furnaces to make the bricks red hot. The trial trip took place on the 28th of November 1861, the start being made from Bishop’s Road. The hot water was poured in, and the hot bricks were stowed in the firebox and round the boiler, and, with a few open trucks, away she went. “A cloud of smoke, dust, and steam,” says the report, “soon covered the train and continued until it emerged from the tunnels into the open air” - and it only just got there. In fact it was a failure, and the Great Western had to work the line as arranged until engines of the ordinary sort, with modifications, could be built, which, as it happened, were not ready until the underground battle of the gauges had been decided.

Extensions, small in length and great in cost, soon began. Citywards the line went on to Moorgate Street, now the largest station, where nearly a thousand trains run in and out during the day; then, after a considerable interval, it extended to Bishopsgate and to Aldgate. In partnership with the Great Western it reached Hammersmith; and it started on the St. John’s Wood line, made by a separate company of its own formation, of which the continuation took it out into the country to end in Buckinghamshire. It is now 46 miles long, with its trains travelling 4 millions of miles during the year, carrying 81 millions of passengers, 2 million tons of minerals, and about 800,000 tons of merchandise. Those who knew the dingy, smoky Metropolitan in the steam era will hardly recognise it since electrification has made it the most convenient of the underground lines. 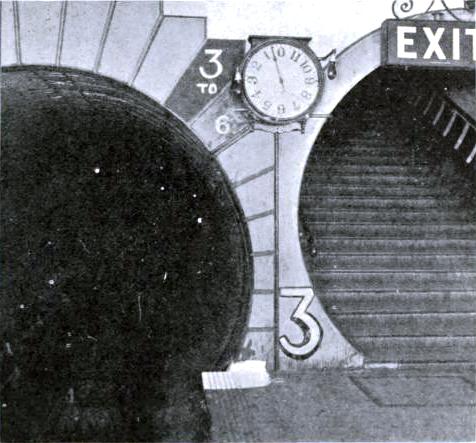 THE HEADWAY CLOCK AT TRAFALGAR SQUARE.

The District, really the Metropolitan District, which, to begin with, called itself the Daylight Route, and was almost as bad, has been similarly improved. It opened in December 1868 from High Street, Kensington, to Westminster Bridge, the connecting link between Praed Street junction and High Street being made by a separate company that was soon absorbed. In 1870 it was extended to Earl’s Court, where it owns most of the land, and leases from the Midland the rest, on which the exhibitions are held. From Earl’s Court its continuations have taken it to Addison Road, Putney Bridge, Hounslow, and South Harrow. The Embankment extension was opened to Blackfriars in May 1870. Next year the District reached the Mansion House, and in 1884 the City Lines and Extensions, a joint enterprise with the Metropolitan which cost a million a mile, took it to Aldgate to complete the Inner Circle; and thence it has gone on jointly with the Tilbury & Southend to Bow. It is 25 miles in length, and its trains travel 3 million miles in a year and carry 56 millions of passengers.

Electricity on railroads had been talked about for years. In September 1842, Robert Davidson had on the Edinburgh & Glasgow an electro-magnetic locomotive running on four wheels, and weighing five tons that went at a speed of four miles an hour. Current from batteries was, however, too costly for everyday working, and nothing more was done until the dynamo was introduced. In 1879 at the Berlin Exhibition Werner Siemens began electric traction as we now know it, and four years afterwards the first electric railway opened in the British Isles - the Portrush & Bushmills in the north of Ireland.

Then came a development which affords yet another instance of the unexpected. The Greathead shield was invented for making tunnels, and the inventor searching about for something to use it for, decided on running a cable tramway under the Thames from the City to Southwark. Fortunately he failed in raising the capital, but Mr. C. G. Mott, then a director of the Great Western, was induced to take an interest in the matter, and, after consideration, he recommended that an electric railway should be substituted for the cable tramway. By his influence the needful funds were subscribed, and in 1884 the City of London & Southwark Subway obtained its Act. It was a mile and a quarter long, the terminus being at the Elephant. In 1887 another Act was obtained by which it went on to Stockwell and became the City & South London, which a few years afterwards reached Clapham Common. 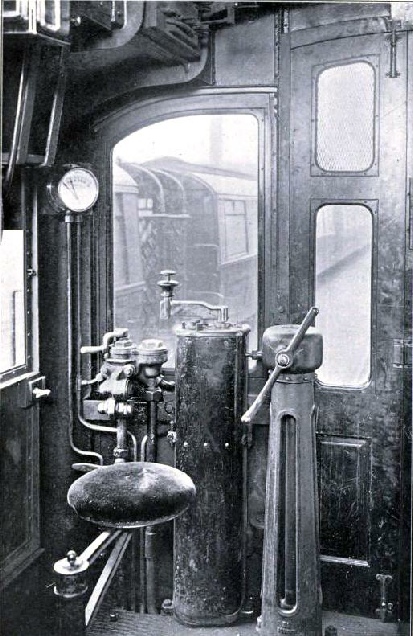 Deep down in the earth, far below all drain and pipe troubles, owing to its having to go under the bed of the Thames, the shield worked admirably. The tunnel tube is in sections of the circumference bolted together; when the first excavation has been made, and enough room afforded for the shield to begin its work, a steel cylinder overlaps the end of the tube; at the front end of the cylinder is the shield, beyond it is a series of cutters, and behind are hydraulic presses that push it along. The stuff cut away is brought through the doors in the shield, and the tube sections are put into place as it advances.

The circle cut being a trifle larger than the tube, a narrow space is left between the tube and the surrounding earth which is filled up with the blue lias grouting driven in by compressed air.

This tunnel-making made easy proved as successful as was anticipated, and the South London went ahead satisfactorily, even through the sand and water met with between the Oval and Stockwell. When the line was completed, further work was found for the shield in making the Blackwall tunnel; then it went on to the Central London, and thence to the other London tubes, all of which are traceable to the need of finding something for it to do.

The South London is the pioneer line and must be gently dealt with. With its extension to Euston it is eight miles long, the same length as the Hampstead; the Piccadilly being a little over nine miles, the Central London seven, and the Great Northern & City but three. It carries 21½ millions of passengers a year. Though of standard gauge, it is of small dimensions, and, when it was opened, its carriages were of the type generally associated with a journey to the interior of the earth. Those now in use are better, but the rolling stock compares unfavourably with that of the other subterranean lines in which the tunnels are of greater diameter. Unlike the other lines, the trains are worked by electric locomotives, which have to be shunted and otherwise handled as if driven by steam.

The South London has its generating station at Stockwell. The Central London - once, but no longer, known as the Two-penny Tube, it having abandoned the uniform fare - has its generating station at Shepherd’s Bush, the Metropolitan has its own at Neasden, but all the other so-called Underground Railways receive their current from the mighty station whose four tall chimneys make Chelsea discoverable from every part of London.

The work done by these tubes is becoming prodigious. The Underground, for instance, is carrying 240 millions of passengers a year. The Baker Street & Waterloo, between 7.30 a.m. and 10.30 a.m. and 5 p.m. and 8 p.m., is running trains every hundred seconds; and the Hampstead is running them every eighty seconds, and keeping good time owing mainly to the system of automatic signalling adopted on these lines, one of the noticeable features of which is the headway clock working backwards and showing the interval that has elapsed since the departure of the preceding train. And not only is there this clock, going a dozen times as fast as any other, to tell the driver for how many seconds ahead the road is clear, but in his cab is a telephone by which he speaks to the stations on either side of him. He drives the train by the deadman’s handle, so called because it ceases to act, and the train stops, as soon as his grip of it fails. These, too, are the lines with the lifts that let out first those who enter first, the liftman touching a catch which frees a pneumatic arrangement by which the rear gates open automatically. 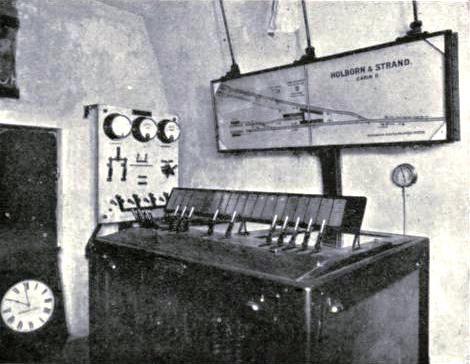 The South Western tried to get into the City sixty years ago, and it got there when in 1907 it bought the Waterloo & City. This is an electric line whose rails extend for two miles, and whose passages end opposite the Royal Exchange in the very centre of London.

Waterloo is also served by the Baker Street & Waterloo, which begins at the Elephant and ends at Edgware Road. This is over five miles long, and forms part of the Underground system. By it the man with a handbag is put in easy and direct communication with the Great Central, the Metropolitan, the Central London, the Piccadilly, the South Eastern, and the District, and if he cares to change and change can reach every London terminus, as indeed he can do by any of the others if he thinks it worth while. 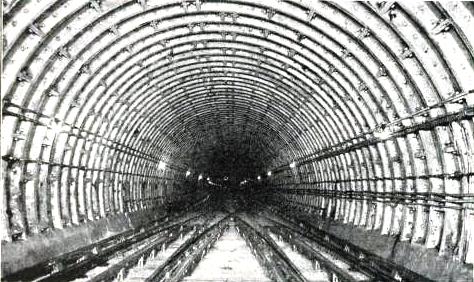 THE CROSSOVER AT FINSBURY PARK.