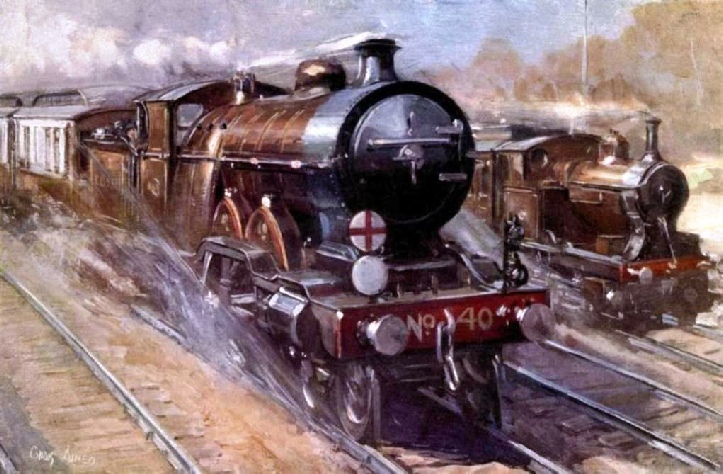 BRITAIN’S FAMOUS SIXTY-MINUTE FLYER, “THE SOUTHERN BELLE”. This train, comprising five to seven Pullman coaches, runs between London and Brighton, covering the 50½ miles in the hour.

WHILE comparisons between train speeds attained in various countries invariably are interesting, as a rule it is almost impossible to discuss them fairly, owing to the difficulty of reducing the performances to a common basis. So many factors affect the situation, such as gradients, curvature, condition of the track, junctions, carrying capacity and weight of the trains, character of the service, and distance.

But there is one very interesting parallel affording comparisons to be drawn, seeing that the conditions are approximately equal. Both trains are scheduled to cover a similar distance in sixty minutes; the composition and weight of the trains are about the same; the permanent ways are alike and of the give-and-take order; both are non-stops; and both run from point to point in each direction. The one is in England, the other is in the United States; each is the crack train of its class in its respective country.

The English train is the “Southern Belle”, running between London and Brighton, which has earned justly the distinction of being the finest and most luxurious “sixty-minute flyer” in the United Kingdom. This train was inaugurated as the “Sunday Pullman Limited”, to cover the 50½ miles between Victoria and Brighton within the hour, in October, 1899. It proved an instant success, and although confined to Sundays, was always taxed to its utmost seating capacity. When certain widening and other improvements upon the line had been completed, the once-a-week flyer was converted into an everyday train, under the name of the “Southern Belle”, the Pullman Company, Limited, taking the opportunity to introduce a train which, in point of palatial appointment and comfort, exceeded anything previously seen in these islands. The punctuality of this express constitutes one of the most striking features of the London, Brighton and South Coast Railway’s long distance traffic, and very justly it has become known as the “clock-train”.

Its composition varies from five to seven Pullman coaches, according to the exigencies of the traffic. Each car measures 63 feet 10 inches in length, by 8 feet 8¾ inches in width, with a height of 13 feet 6 inches from rail to roof, and weighs about 40 tons. The full train has seating accommodation for 219 persons, and complete with full load represents a weight of about 280 tons.

The American train plies between Philadelphia and Atlantic City, which is to the Quaker City what Brighton is to London, only, whereas the English resort has an all-the-year-round season, that of Atlantic City is confined to the summer months, although now it is coming into favour likewise as a popular continuous residential and health centre. From Philadelphia to the sea is a distance of 56½ miles, but inasmuch as the terminal station of the Philadelphia and Reading Railroad is on the west bank of the Delaware River, which at this point is about a mile wide, the first section of the journey is by steam ferry across the waterway to Camden, on the opposite bank, whence the train starts. The mileage is taken from Camden, from which station Atlantic City is 55½ miles distant, but the timing is from Philadelphia terminus. Ten minutes are allowed for embark-ing on the ferry, crossing the river, and transferring to the train, which therefore is scheduled to cover the 55½ miles in 50 minutes - an average speed of 66.6 miles per hour. 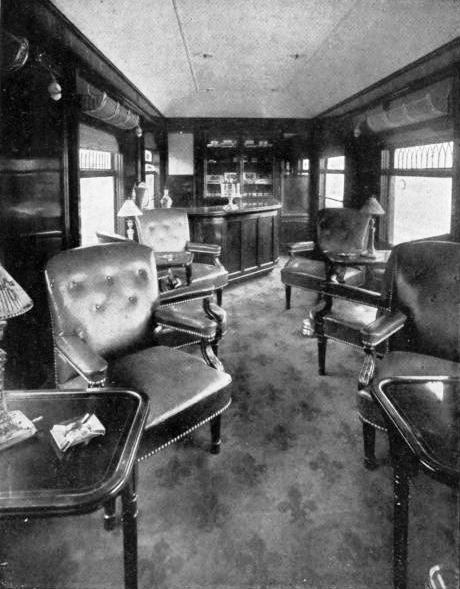 THE BUFFET CAR “GROSVENOR” ON THE “SOUTHERN BELLE”. Luxurious appointment is the feature of this train: this car is furnished in the Adam style.

In order to obtain a closer parallel between the English and American trains it would be necessary to imagine the Thames a mile wide, stretching from Victoria Station to the south end of Grosvenor Bridge, and negotiated by ferry. But although the latter is eliminated from the English conditions, there is a stiff bank on a sharp curve outside Victoria Station, rising at 1 in 50 for half a mile, which is against the train starting from rest.

The composition of the American train is closely analogous to the “Southern Belle”. As a rule it comprises six coaches of the Pullman pattern - a seventh is attached when the traffic is heavy - and the total weight hauled is about 280 tons loaded, exclusive of the engine.

The Atlantic City flyer was introduced in the summer season of 1896, and it aroused intense world-wide interest from its first appearance, owing to the high travelling speeds placed on record. On August 5th, 1898, it covered the 55½ miles with six coaches and 285 passengers in 44¾ minutes, at an average speed of 74.4 miles per hour, the total load on this occasion, both engine and coaches, representing over 330 tons.

The speed was so high, and maintained so consistently day after day in each direction, that interest became centred in the engine. This was of a new class able to fulfil the speed conditions the company desired. It was of the 4-4-2 type, there being a leading four-wheeled bogie, four coupled driving wheels, and a trailing bogie under the fire-box. The drivers had a diameter of 84¼ inches; the driving wheel base was 7¼ feet; while the total wheel base was 20 feet 7 inches. Compound working was adopted, the high pressure cylinders having a diameter of 13 inches, and the low pressure cylinders a diameter of 22 inches, with a common stroke of 26 inches. The boiler was 58¾ inches in diameter, carrying 278 tubes, each 13 feet in length by 1¾ inches diameter, and having a heating surface of 1,656 square feet. The fire-box measured 113⅞ inches in length by 96 inches wide, with a heating surface of 180 square feet, bringing the total heating surface to 1,836 square feet. The grate area was 86 square feet, and steam was maintained in the boiler at a pressure of 200 pounds per square inch. The total weight imposed upon the drivers was about 35 tons. The tender, mounted on two four-wheeled bogies, carried some 3,300 gallons of water. The driver’s cab was placed in front of the fire-box, and mounted saddlewise on the top of the boiler.

The story of the evolution of this engine is somewhat interesting. The Philadelphia and Reading Railroad built a 10-wheel engine comprising a four-wheeled leading bogie, and six coupled drivers. The company, however, desired an engine capable of sustaining its horse-power at high speeds, so the rear pair of driving wheels were changed to trailers, to obtain a deeper and longer fire-box than was possible with the six driving wheel arrangement. In this manner an increase in steaming power, so as to be able to haul heavy passenger trains at high speed, was secured. In this converted engine the trailing wheels were not provided with a truck, but were placed simply in pedestals and set in approximately the same place occupied by the removed pair of driving wheels. The experimental engine, proving highly successful in practice, became standardised for this service. 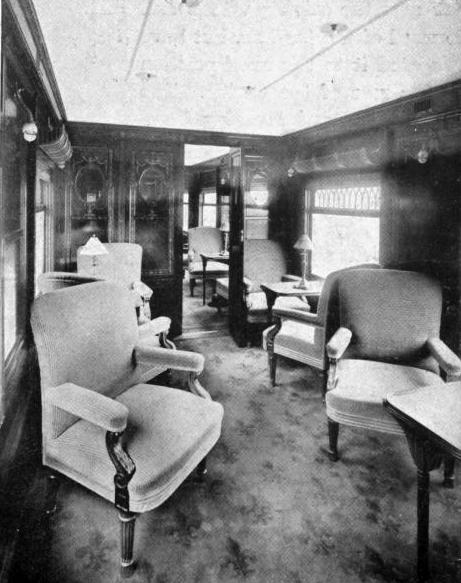 THE DRAWING ROOM CAR “CLEOPATRA” ON THE “SOUTHERN BELLE”.

The performances of this class of engine becoming appreciated, it has been adopted practically throughout the world in a modified form, but is universally known as the “Atlantic”, from its first appearance in connection with the Atlantic City flyer.

Other countries have not followed the practice of placing the driver’s cab over the driving wheels and forward of the fire-box, but have relegated it to the usual position at the rear of the engine. The Philadelphia and Reading Company, however, has retained the original design. The “Atlantic” engine which hauls this fast train to-day is identical with that which appeared in 1896, except that it is more powerful, in accordance with the progressive spirit of the age.

So far as the British and American roads are concerned the last-named has the advantage. The “Southern Belle” has one or two stiff stretches of heavy banks ranging from 1 in 56 up to 1 in 100, with curves of 660 feet radius. The most handicapping feature are the junctions, twelve of which have to be negotiated, and these necessitate reduction in speed.

Although the Philadelphia and Reading Railway is less troubled in this latter respect it has its own peculiar adverse influences not experienced on the British railway - level crossings. The “Southern Belle” has to contend against congested suburban traffic working between Victoria and Croydon, whereas its American rival is affected only slightly in this connection, and is able to get well into its stride before the first two miles out of Camden are covered. Whereas the “Southern Belle” is called upon to make spurts of speed on good sections of the road between busy junctions, and where 80 miles per hour often are notched, the Atlantic City flyer is able to maintain a steady gait throughout the greater part of its flight.

The “Southern Belle” makes the round trip between London and Brighton twice a day throughout the year. Its arrival five minutes ahead of time is by no means uncommon, while the occasions on which it has been half-a-minute late are very rare. Still, even under the most favourable conditions the speed achieved does not approach that of the Atlantic City flyer.

The fastest run placed on record by this express was made on July 20th, 1904, when the 55½ miles down were reeled off in 43 minutes dead, giving an average speed of 77.4 miles per hour. It may be pointed out that, although the fastest runs have been made on the outward journey, owing to the grade falling steadily and almost continually towards the sea-coast from the seventeenth mile-post out of Philadelphia, yet the upward runs are equally brilliant. Nor have the highest speeds been attained under conditions of light load, inasmuch as on August 20th, 1898, the train of seven Pullmans, carrying 505 passengers, left Philadelphia 45 seconds late, but arrived at Atlantic City 2½ minutes ahead of schedule, the actual running time being 46¾ minutes with an average of 71.2 miles per hour.

COMPOUND NO. 1027, ONE OF THE FIRST “ATLANTICS” WHICH HAULED THE AMERICAN FLYER.

The drivers were 84¼ inches in diameter, and the complete weight of locomotive and tender was 114½ tons.

Needless to say, this fine express is patronised heavily by season ticket holders, who, preferring to reside by the sea during the summer, yet demand quick communication between home and business. This train meets their convenience. On the up-journey it leaves Atlantic City at 8.15 a.m., arriving at Philadelphia an hour later; on the return journey it leaves Philadelphia terminal at 4.0 p.m. (Camden at 4.10 p.m.), reaching Atlantic City at 5 o’clock.

Although the “Southern Belle” still ranks as the crack train on the London, Brighton and South Coast Railway, this pride of place now is attributable rather to luxury and comfort than highest speed, seeing that one or two other trains cover the journey in the hour dead. But taken on the whole the running performances over the 50½ miles between London and Brighton do not compare so favourably with the train service offered over the 55½ miles between Atlantic City and Philadelphia (Camden Station). Of the twenty daily up trains, two cover the distance in 54 minutes, two in 55 minutes, three in 60 minutes, and six in 63 minutes. On the down journey, of the twenty trains one takes 53 minutes, two 55 minutes, two 60 minutes, and eight 65 minutes. But the hustling Philadelphian has become so accustomed to fast travelling over this system that he dubs the 65-minute expresses with two stops a “slow train”! A contrast to these flyers is the “parliamentary” train, stopping at all intermediate stations, which occupies two hours on its crawl from terminus to terminus.

THE FASTEST 60-MINUTE TRAIN IN THE WORLD. The “Atlantic City flyer”, which covers the 55½ miles between Camden (Philadelphia) and Atlantic City in 50 minutes, hauled by type of “Atlantic” (4-4-2) locomotive.

Seeing that the “Atlantic” type of locomotive is utilised for the haulage of these two famous expresses a comparison of the engines used on the London, Brighton and South Coast and the Philadelphia and Reading Railways respectively is interesting. 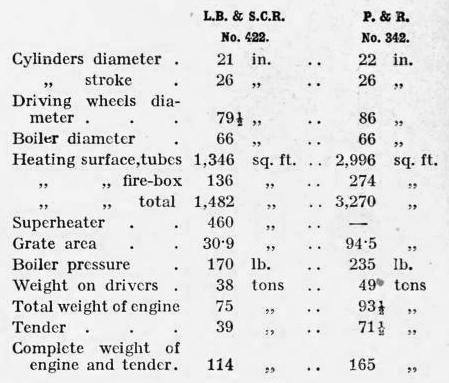 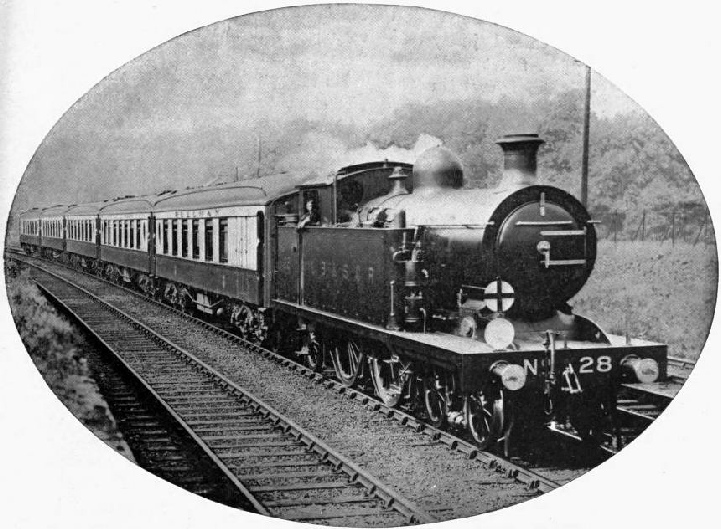