This train inaugurates a new era in Indian railway travel and gives the maximum comfort and luxury to tourists. The travellers live on the train, which moves from point to point during the night.

THE remarkable growth of traffic between London, Switzerland, and points beyond has been responsible for an increased demand for locomotive effort among the different countries through which this flow of traffic passes. This development has been particularly noticeable in Switzerland, where the heavy grades among the mountains exercise such an adverse effect. Notwithstanding this handicap it is possible to cover the 842 miles between the English capital and Milan by means of the crack expresses in 24-25 hours.

The Swiss Government has assiduously cultivated fast travelling over the lines under its control, inasmuch as it is threatened by the French route to Italy which goes by way of the Cenis Tunnel. During the past few years more and more powerful locomotives have been designed. They are of the 4-6-0 type, and divided broadly into two classes. While one locomotive is capable of drawing the train unaided over the average or valley stretches of the system, double-heading has to be employed to lift it over the steep banks of the Gotthard Tunnel section, while the Simplon Tunnel is worked by electric haulage, as described in a previous chapter.

The most powerful Swiss express locomotives are four-cylinder compounds. The road engines have high-pressure cylinders measuring 16¾ inches in diameter, while the low-pressure cylinders are 24¾ inches in diameter, the stroke being 26 inches. The driving wheels are 70 inches in diameter, and the weight distribution is 15·9 tons upon the front driving axle, and 16 tons upon each of the other two axles, giving a total adhesive weight of 47·9 tons. The boiler has a minimum diameter of 63 inches. The total heating surface is 2,195 square feet, and the grate area 30 square feet. Steam is used at a pressure of 210 pounds. In running order the engine weighs 73 tons. The six-wheeled tender has a capacity for 7 tons of coal, in addition to water, and loaded weighs 41·8 tons, bringing the total weight of the locomotive to 114·8 tons ready for the road. The maximum speed attainable is 80 miles per hour.

The engines engaged in pilot service have high-pressure cylinders 15½ inches and low-pressure cylinders of 25 inches diameter, with a common stroke of 25 inches. The driving wheels are 63½ inches in diameter. The total heating surface is 2,540 square feet, while the grate area is 36 square feet. The total weight of the engine under service conditions is 79 tons, of which 49½ tons are disposed over the driving axles. The six-wheeled tender has capacity for 5 tons of coal, in addition to water, and weighs, in running order, 39·2 tons, bringing the total weight of the locomotive to 118·2 tons, while its overall length is 57¼ feet. Its rated maximum speed is 72 miles per hour.

The maximum travelling speeds of trains in Switzerland are controlled rigidly by law, and the steps taken to ensure these maxima not being exceeded are of an elaborate character. The supply of a tachometer in the cab of the engine is compulsory for the assistance and guidance of the driver. The speeds which are set down can only be exceeded by special arrangement, which, it may be mentioned, is not extended readily. The restrictions vary, but are specified under one of three broad headings. Passenger trains fitted with continuous automatic brakes are allowed to attain a maximum speed of 72 miles per hour so long as the number of axles does not exceed 44. With from 45 to 52 axles the speed is reduced to 60, and from 53 to 60 axles is restricted to 52 miles per hour. Trains which are not fitted with a continuous brake have their maximum speeds reduced somewhat severely, those in passenger service up to 60 axles and goods trains up to 120 axles being permitted to run at 36 miles per hour.

Curves and gradients also affect the issue. While an automatically braked passenger train may attain a speed of 68 miles per hour on a bank ranging from 1 in 100 to 1 in 80, it must not exceed 40 miles an hour on gradients ranging from 1 in 36 to 1 in 33. The speed round curves is graduated in a similar manner. On curves ranging from 1,640 to 1,475 feet in radius 58 miles per hour are allowed, but on curves ranging from 656 to 577 feet in radius the speed is restricted to 40 miles per hour. Where a line has curves of less than 577 feet radius or banks heavier than 1 in 33 the authorities make special arrangements. As the tachometers are designed to give a continuous graphic record of the speeds attained throughout a journey, and as their working is automatic, tampering is impossible. 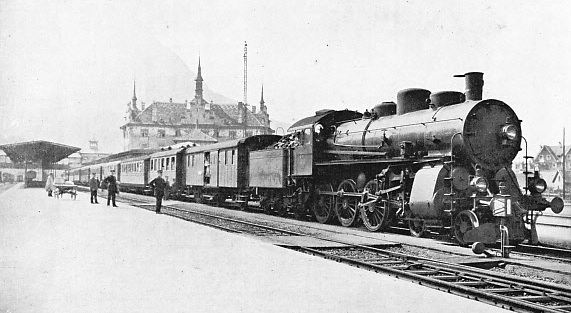 THE ST. GOTTHARD EXPRESS HAULED BY THE LATEST TYPE OF 4-6-0 STEAM LOCOMOTIVE.

India is claiming an increasing number of visitors every year, and an innovation which will meet with the greatest appreciation has been introduced by the Great Indian Peninsula Railway. This is the “Peninsula Express”, or, to quote its colloquial title, the “Tourists’ Hotel” train, which has been provided as a compensation for the indifferent hotel accommodation available in the smaller cities of Upper and Central India. In order to attract the travelling public to the wonders of our Indian Empire the management of the Great Indian Peninsula Railway realised that some special effort was necessary. The carriages of this train de luxe are of the very latest vestibuled type, and it is, in fact, a “club on wheels”, with every possible convenience to be found in a first-class European hotel. The broad gauge of this railway gave the carriage superintendent, Mr. A. M. Bell, M.I.M.E., excellent scope to secure spaciousness in the compartments and saloons, a factor of which he has taken the utmost advantage.

Visitors to India who travel over this system, and who take advantage of this travelling hotel, practically live on the train during the whole of their trip. As a ride it moves from point to point in accordance with a planned itinerary, the departure from one centre for another being timed in the evening about the dinner hour. This gives ample opportunity during the day for sight-seeing, and at the same time ensures travelling at about the most convenient and pleasant time.

Special attention has been devoted to the designing and equipment of the sleeping accommodation to ensure the utmost pleasure and comfort. The “sleepers” are built upon the corridor principle, with both longitudinal and transverse berths arranged in cabins for two or four occupants. In this manner absolute privacy is assured, while each cabin is fitted with electric light, fans, ample space for hand-baggage and other conveniences.

The personal baggage of the passengers is carried in the front vehicle, which is a combination car. Here it is stored in cloak rooms under the care of a conductor, and whenever necessary a particular bag or trunk can be discovered instantly. This combination car also contains compartments for the accommodation of the private servants of the travellers, a fully equipped bathroom, and a number of private dressing-rooms, the latter being finished with tiled floors and enamelled walls.

The “parlour” car offers a seductive smoking lounge, a dainty ladies’ boudoir, and a general reception-room. There is a buffet, library, and also a pianola for whiling away the idle evening hours.

The “restaurant” car, capable of seating 40 persons, is of imposing dimensions. The separate tables are lighted by bracket electroliers, while a number of powerful electrically driven punkahs ensure a cool, refreshing atmosphere. There is a commodious kitchen fitted with a large gas cooking range, grill, boilers, etc. A pressure filter of large capacity secures a constant illimitable supply of cool, filtered water. All stores, provisions, and ice are carried in a store van adjacent to the kitchen, which also offers accommodation for the train crew, attendants, and other servants.

Special attention has been devoted to efficient and adequate ventilation, while the roofs and sides are double, with a layer of heat-resisting or non-conducting packing between. All the fittings and upholstery have been carried out in a manner adapted to Indian requirements. All windows are fitted with dust screens and Venetian blinds. Last but not least there is a complete telephone installation fitted throughout the train. Smart attendants in uniform are deputed to attend to the passengers’ comforts and wants in the manner of stewards on board an ocean liner. Inclusive fares are charged, no extras being permitted, so that the visitor knows before he starts exactly what the journey is going to cost. 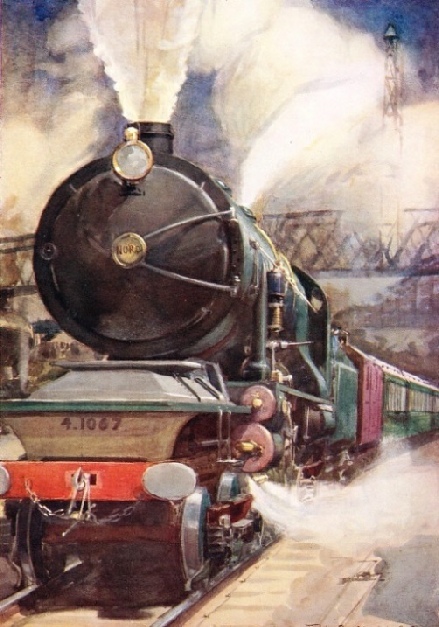 Among European railways the expresses of the Chemin de Fer du Nord compel attention, because they offer striking expressions of fast railway travelling. Many of the crack trains upon this system attain and exceed an average speed of 56½ miles per hour. Pride of place, however, is held by No. 197, in the Paris-Berlin service. This covers the 149 miles between Paris and Erquelines in the schedule time of 2 hours 31 minutes, giving an average speed of 59·2 miles per hour. Train No. 67, on the Paris-London route, also accomplishes some magnificent running. The 184·7 miles between Paris and Calais are timed to be run off in 3 hours 15 minutes, which represents an average speed of 56·83 miles per hour. These two trains are not only the fastest upon the Nord system, but also rank first in point of speed for their distance upon the Continent.

DEPARTURE OF THE NORD EXPRESS

The French “flyers” of the Chemin de Fer du Nord, hauled by powerful “Baltics” (4-6-4) are among the fastest trains in Europe.

The average load hauled by the locomotives in the Paris-Berlin fast services, comprising first and second bogie cars, is 235 tons, increased upon occasions to 275 tons. In the case of the Calais-Paris express, which is composed exclusively of Pullman cars of the Compagnie des Wagon-Lits, the train weight is 250 tons in summer. During the winter season the load is increased up to 400 tons, inasmuch as this train constitutes the “Calais-Mediterranean Express”.

These crack trains are hauled by the well-known Nord Pacific (4-6-2) engines, weighing, in running order, 86 tons, of which 49·17 tons are available for adhesion. The drivers have a diameter of 80·3 inches, while the total heating surface is 2,292·5 square feet. Huge powerful Baltics (4-6-4) locomotives have also been constructed for these services.

You can read more on “Famous Expresses 2”, “The Great St Gothard”, “The Northern Railway of France” and “Speed Trains of Europe” on this website.