THE 10 AM GLASGOW-CARLISLE EXPRESS AT CRAWFORD.

AS mentioned in a previous chapter, traffic between London and Scottish points, flowing over the West Coast route, runs via Carlisle. This city indicates the northernmost limit of the main line of the London and North Western Railway. Between the Border and Scottish points the trains are handled by the Caledonian Railway, a system which has achieved a unique fame from the expeditious working of the trains over difficult stretches of its system.

The express business of the main lines of the Caledonian Railway may be divided broadly into two classes. The first comprises the Scottish sections of the West Coast traffic, in conjunction with the London and North Western Railway; the second consists of the Caledonian express service proper between Glasgow, Edinburgh, Perth and Aberdeen.

The first named are represented by the up and down Scottish crack flyers of the West Coast route, or, as they are now known colloquially, “The White Trains”, from the fact that the upper parts of the coaches are painted externally in white and gold. These trains are among the finest that this country can show in point of comfort, luxury, and up-to-date equipment. Six complete trains, composed of 57-feet corridor vehicles and 65-feet dining-cars, were built at the Wolverton works of the London and North Western Railway, and were first brought into the Scottish service in July, 1913, for the north and south bound morning flyers. The ordinary coaches weigh about 32 tons each, while the dining-cars are about 36 tons apiece unloaded, the total weight of a complete empty train being about 320 tons.

Taking the up trains first, the day express leaves Glasgow at 10.0 am and Edinburgh five minutes later. These trains run every day, Sundays excepted, throughout the year, although there is a slight modification in their operation according to the seasons. In the winter the Glasgow and Edinburgh sections meet at Carstairs, and run thence to London intact, but during the summer months they are run independently as far as Crewe, and from that point as one train to London. The number of coaches in each section is 10 from Glasgow, and 11 from Edinburgh, including through carriages from Glasgow to Bristol, Birmingham and London, and to Liverpool, Manchester, Bristol, Birmingham and London from Edinburgh.

The weight of each train upon leaving its Scottish stations is 328 and 356 tons respectively. They are handled by the heaviest type of superheated locomotives of the 4-6-0 class, which haul the load unaided over the Scottish sections. The scheduling over the 102¼ miles between Glasgow and Carlisle, which is non-stop, except for a conditional call at Mother-well, is 132 minutes, while the Edinburgh portion makes the 100½ miles to the Border in 125 minutes, the average speed for the former coming out at 48·31, and for the latter at 50·25 miles an hour. Considering the trying nature of the road, and the heavy gradients, particularly the climb up the Beattock bank on the Glasgow line, where the summit is at 1,015 feet above sea level, the running performance is striking, and indicates the capacity of the powerful locomotives employed for the work.

The afternoon train leaving Glasgow at 2.0 pm, while not putting up such high speeds, is also a notable flyer. The average composition of the train is nine coaches, representing a total unloaded weight of about 300 tons. It is likewise hauled by the “Cardean” 4-6-0 class of locomotive, covering the 102¼ miles between Glasgow and Carlisle in 135 minutes - an average of 45·45 miles per hour.

In the reverse direction the 10.0 am express out of London reaches Carlisle at 4 pm, covering the 299 miles in 6 hours, an average of 49·83 miles per hour. Being the sister train to the 10 o’clock down, it runs daily, except Sundays, all the year round, is rostered with 10 coaches, representing an unloaded weight of 328 tons, and makes a non-stop run between Carlisle and Glasgow, except conditional calls at Symington and Motherwell. The distance between the Border and the Clyde city is made in 133 minutes, giving an average speed of 47·19 miles an hour. This run is made with the “Cardean” 4-6-0 type of locomotive, which has to fulfil some very hard work, especially upon the 10-mile climb between Beattock and Summit, where the grade ranges from 1 in 75 to 1 in 80. The 2.0 am out of Euston, leaving Carlisle at 8.10 for Glasgow and Edinburgh, divides at Strawfrank Junction, the Glasgow section covering the 102¼ miles in 130 minutes, including stops, and the Edinburgh portion making the 100½ miles in 140 minutes, the first-named maintaining an average speed throughout of 48·31 miles per hour.

In addition to the foregoing all-the-year-round daily expresses, some excellent performances are put up by the tourist expresses. The 7.45 pm out of Euston makes only two stops between London and Perth - at Crewe and Carlisle respect-ively. It runs daily - Saturdays and Sundays excepted - during July, August and September for the special conveyance of tourists. The rostered number of vehicles is six, but from the middle of July till the “Glorious Twelfth” it is always loaded to its uttermost capacity, is often duplicated, and at times triplicated, to cope with the heavy exodus created by the opening of the grouse season. As a rule it is worked as a non-stop between Carlisle and Perth by one of the superheated 4-4-0 class. The train is scheduled to cover the 151 miles of the Scottish division from the Border in 175 minutes, which gives an hourly speed of 48·89 miles. 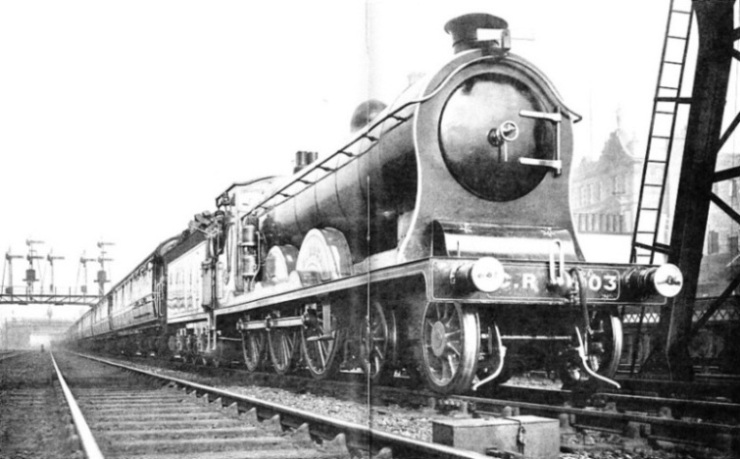 ONE OF THE FAMOUS CALEDONIAN FLYERS READY FOR ITS RUN. The 4-6-0 “Cardean” locomotives which handle these expresses between Carlisle, Glasgow and Edinburgh are among the most powerful in the country, and ensure that punctuality which is such an outstanding feature of this well-known line.

Fifteen minutes later the Perth and Aberdeen tourist sleeping saloon express leaves the Metropolis every night throughout the year, except on Saturdays during the summer months, and Saturday and Sunday nights during the remaining nine months. The Aberdeen complement averages six cars, but as frequently there are many additional special vehicles, the total unloaded weight of the train may be taken at well over 300 tons. During the height of the season the train is run in duplicate, the first portion of six vehicles being for Aberdeen only, and it runs from London to Carlisle with but two stops. Here a 4-4-0 locomotive is attached, and runs through to Aberdeen, 240¾ miles, with only one stop, at Perth, and a conditional call at Stonehaven. The 151 miles to Perth take 183 minutes, while the 89¾ miles thence to Aberdeen are covered in 113 minutes, giving average speeds of 49·5 and 47·74 miles per hour respectively.

As a matter of fact these records are far more remarkable than they appear on paper. The severity of the gradients is a great deterrent to high speed, because, in addition to the negotiation of the Beattock-Summit incline, the train has another pull against the collar for 5 miles from Bridge of Allan to Kinbuck, where the grade ranges from 1 in 73¼ to 1 in 100.

Possibly the finest speed achievement recorded by the Caledonian engines is the down Postal express, leaving London at 8.30 pm and Carlisle at 2.54 am. It is a daily train - except Saturdays - carrying through mail coaches for Aberdeen, Glasgow and Edinburgh, and totals 10 vehicles. The train is not advertised between London and Stirling, but becomes a passenger train from the latter point, owing to the attachment of a passenger section from Glasgow for Perth and Aberdeen. The 299 miles between London and the Scottish border are made in 6 hours 48 minutes, while the 151 miles between Carlisle and Perth are reeled off in 179 minutes, representing an average of 51·98 miles per hour. The fastest speed, however, is made over the last section, the 90 miles between Perth and Aberdeen being notched in 97 minutes - 55·51 miles per hour.

While the foregoing flyers worked by the Caledonian Railway are possibly the most familiar to long-distance travellers, the Caledonian expresses proper are great favourites among Scottish travellers. Pride of place is occupied by the “Grampian Corridor” dining-car express, running between Glasgow and Aberdeen. It is a non-stop between Glasgow and Perth, 63 miles, in both directions, making the distance in 82 minutes - an average of 46·1 miles per hour - while it covers the 89¾ miles between Perth and Aberdeen at 40·09 miles per hour.

The composition of the Glasgow portion is generally four 65-feet corridor coaches for Aberdeen, and five vehicles for Perth and Inverness. At Perth two 65-feet corridor coaches and a dining-car from Edinburgh are attached, together with a slip coach for Blairgowrie, which is dropped at Coupar-Angus. The weight of the “Grampian” cars varies from 35 to 38 tons per vehicle, so that the weight of the train leaving Glasgow is usually over 300 tons. On the return journey the load is about 60 tons heavier, owing to the addition of coaches from Dundee and Inverness at Perth. On the night homeward run, with this heavy load, the 4-6-0 superheated class of locomotive is called upon to perform some trying work. The gradients are particularly stiff, the heaviest being from Dunning Station to Gleneagles, where the gradient ranges from 1 in 89 to 1 in 121 for a distance of 7 miles. High speeds are not possible, inasmuch as between Coatbridge and Glasgow the train has to traverse a division which is affected very considerably by mineral train working. On the outward run the train has to labour over the 5-mile pull from the Bridge of Allan to Kinbuck, and also has to overcome the Gleneagles bank, where the rail level reaches 401 feet above sea level.

The afternoon corridor express is another first-class train, comprising 10 vehicles similar to those of the “Grampian”, bringing the total weight to well over 300 tons. It is a non-stop to Perth, where it meets the Edinburgh section, the first 63 miles with the 4-6-0 superheated locomotive being covered in 85 minutes, giving an average of 50·4 miles per hour. Thence the speed is not very high, owing to the number of intermediate calls which have to be made.

Then there are the residential expresses such as the “Strathearn”, running between St. Fillans, Glasgow, and Edinburgh in the morning, and between the latter two cities and Crieff in the afternoon; the “Stirling and Ben Ledi”; and the “Tinto”, running between Moffat, Peebles, Glasgow, and Edinburgh. The “Strathearn” on the up journey makes an average of 38·85 miles per hour over the 68 125 miles between St. Lilians and Glasgow, with a maximum average of 45-72 miles per hour over the 57·525 miles between Gleneagles and Glasgow and 46·08 miles per hour between Gleneagles and Edinburgh. On the return journey the average speed is 41·12 miles per hour throughout. The “Stirling and Ben Ledi” express is an important residential train running between Glasgow and Callander, the 46¼ miles being covered in 78 minutes with six stops. The fastest run is made between Glasgow and Stirling, a non-stop for 30·125 miles, which is made in 40 minutes. This service is fulfilled by one of the Caledonian standard 4-4-0 bogie passenger locomotives. 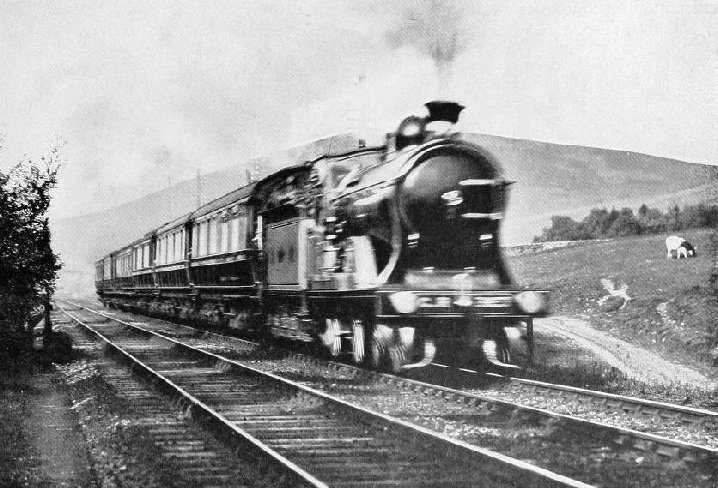 THE 2 PM GLASGOW-CARLISLE EXPRESS AT ABINGDON.

You can read more on “The Caledonian Railway”, “Famous Expresses 2”, “Famous Trains” and “Railways of Caledonia” on this website.