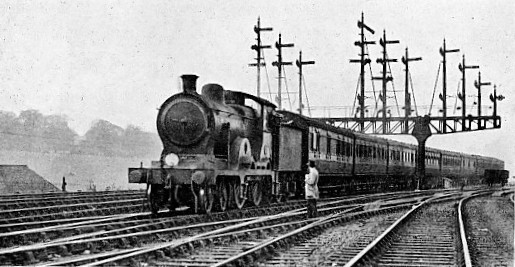 Gantry of Signals at Ipswich, L.N.E.R.

RAILWAY signalling is a very complicated subject; and I must be content to mention just a few of its main principles. First of all, each signal-arm has one side red and the other side white; the red side faces the approaching train to which it refers. As the train is running, too, the driver is only concerned with the signals which point to the left-hand side of the line.

In the picture above, therefore, only three of all the signa

ls carried on the big “gantry” apply to trains running in the direction away from you; all the remainder concern trains coming towards you. Looking again at this photograph, you will notice that the signal-arms for the “away” direction, and four of those governing the “towards you” direction, have little fish-tailed pieces cut out of the ends of the arms.

The fish-tailed arm denotes a “distant” signal; the square-ended arm a “home” signal. When a driver sees a home signal at danger, he must stop; a distant signal at danger tells him that the next home signal beyond, at a distance of half-a-mile or less away, is also at danger. He does not have to stop his train at a distant signal, when it is “up”; but it gives him the necessary time and space in which to pull up at the home signal, especially when he is running at high speed.

The whole of each railway route is divided up into sections, or “blocks”, each controlled by a signal-box. The principle of the “block” system of signalling is that no two trains shall be in the same section, on the same line of rails, at the same time. Where there are no junctions, there are usually at least three signals to control each of the two directions of running ; first you pass the distant signal, about half-a-mile away from the signal-box; then the home signal; and then, about a train’s length or so in front of that, a second home signal, called the “starting” signal, or “starter”. At a station you will usually find the home signal at one end of the platform, and the starter at the other.

At junctions the array of signals becomes a good deal more complicated, as signals have to be provided to govern every line over which a train can travel. The tallest of these usually refers to the main line, and the remaining posts are “stepped” in height according to the relative importance of the line to which they refer. In the Ipswich signal-gantry at the head of this chapter, the signals are in three groups: the left-hand group governs the up and down Norwich main lines on the extreme left; the middle group the Yarmouth lines, on which the train is running; and the right-hand group the goods lines.

Signals “Crossed” before being Brought into Use.

Efforts are now made to simplify these masses of signals where possible by the use of one of the “route-indicating” signals shown here. In this, which is just outside the Lowestoft terminus of the L.N.E.R., instead of having a separate signal-arm to indicate each platform, the one highest arm alone is used, and in the case below there appears a number, according to the platform for which the line is set.

Many other types of signal,

which have been designed to serve special purposes, might be mentioned, and you see some of them illustrated. For example, below the signal last mentioned, there is a curious arm in the shape of a cross. This is called a “draw-ahead” signal; when it is “off”, or down, it tells a driver that he may proceed beyond the home signal, even though the latter is at danger, but only so far as will enable him to shunt, or perform some other necessary duty, without going on into the next section.

The crosses on all the signals on the large signal gantry shown above, however, are only temporary; they simply indicate that the gantry is new, and that the signals have not yet been brought into use. If you see a ring on the end of a signal-arm, as on the right-hand side of the picture taken at Maidenhead, it shows that the signal applies to a goods line, or a line of less importance than the main line. Shunting movements, however, are very largely controlled by “ground discs”, or dwarf signals on the ground, of which you see an example in front of the photograph of the Locomotive Yard signal-box at York.

In these days a beginning is being made m the use of what are called “three-position” signals, which really combine in one both home and distant signals. That shown in the picture, outside King’s Cross terminus on the L.N.E.R., indicates “Danger” in the horizontal position in which you see it; when raised to an angle of 45 degrees, it says “Proceed cautiously; the next home signal is at danger”; and then it can be raised to a vertical position, parallel to the post, when it shows: “All clear”. The three corresponding lights displayed at night are red, green and yellow.

Another variety of the three-position signals is that in which lights only are used, both by day and night, and no signal-arms at all. One of these signals, of which a whole series is now installed between Marylebone terminus and Wembley, on the Great Central section of the L.N.E.R., Is also illustrated here. It is surprising at what a tremendous distance away you can see these hooded lights, even in broad daylight. A home signal of the same type is also shown here.

The biggest signal-box in the country, with no less than 295 levers in one straight line, in the Locomotive Yard at York is shown in two illustrations. Beneath the great frame in which all the levers are fixed is what is known as the “locking” — that vastly important part of the signalling which sees to it that signals and switches cannot be set in such a way as would allow trains to cross each other’s paths and so collide. The numbers painted on the levers refer to this locking, and the complicated diagram which hangs in the box shows the position of every signal and switch, and the number of the lever that works each one. Every signal-box, large and small, is similarly equipped.

In many of the largest boxes to-day, electric or electro-pneumatic power is used to work signals and points, in which case little “toy” levers take the place of the big levers, and the work of the signalmen is made much easier. On the shelf behind the levers are seen the “instruments”, whereby the movement of the trains is signalled from box to box; the messages are made audible by means of the bells beside them, on which a special code of signals is conducted. Where trains run in both directions over a single line of rails, collisions are avoided by means of the “tablet” system of signalling. Briefly, this means that each driver must be in possession of a special “token”, before he is allowed to pass on to the single line. This token can only be obtained from special signalling instruments, electrically controlled, at both ends of the single line section. 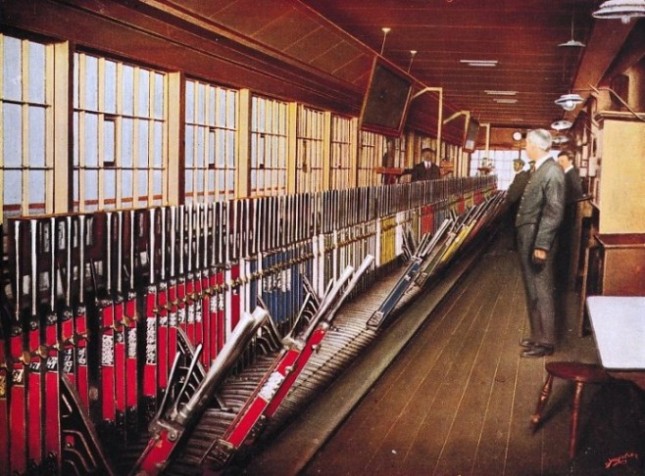 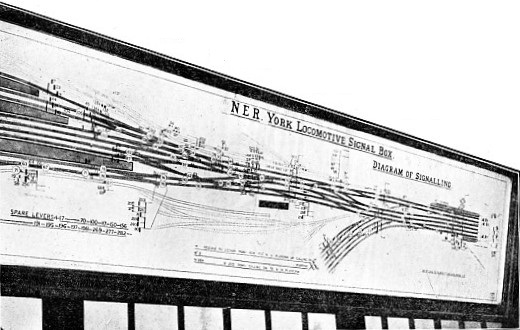 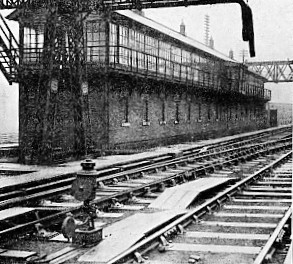 Note the ground signal in the foreground.

Another photograph shows how the taking and giving up of the token are facilitated by the erection of apparatus at the line side. As the engine passes on to the single-line, the fireman puts his arm through the ring at the end of the “staff” seen at the right-hand side of the picture, and neatly hooks it off; when the engine is coming off the single line, on the other hand, he throws the ring on to the horn sticking up on the middle post, whence it is fetched by the signalman, and returned into the signalling instrument. This return must be made before another train is allowed to run on to the single line. 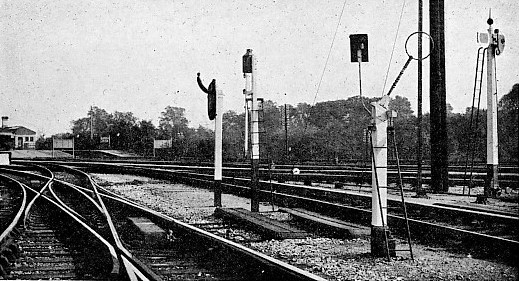 You can read more on “The Magic of Modern Signals”, “Railway Signalling” and “Seen From the Train” on this website.