The wonderful story of the Uganda Railway

RAILWAYS OF THE COMMONWEALTH - 24 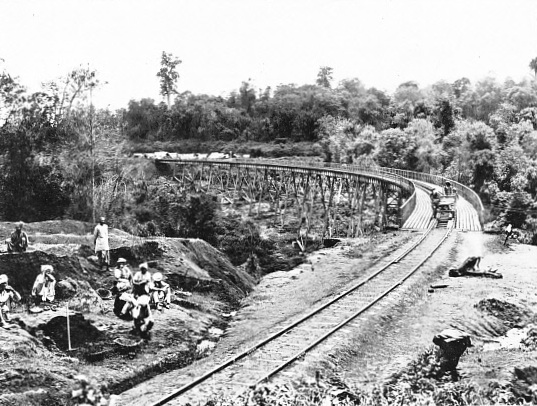 A BRIDGE CONSTRUCTION CAMP ON THE UGANDA RAILWAY.

PUSHING out of Nairobi, the line continues to ascend until, after threading a dense forest, it comes apparently to the edge of a towering cliff, the Kikuyu Escarpment, at an elevation of 7,830 feet. Standing on the edge of the precipice, one gazes upon a wonderful panorama - the Great Rift Valley spread out some 2,000 feet below. When the engineers, in their ever upward climb from the coast, reached this point they made a pause. The ground falls away so rapidly - practically perpendicularly -  into this great depression that the question of carrying an adhesion line into the valley appeared to be impossible.

This was the first real technical difficulty which was encountered so far as actual building was concerned, and the discovery of a method of taking the line down the cliff-side into the valley by means of a workable grade entailed the expenditure of considerable ingenious thought and the burning of much midnight oil. It brought the line to a standstill for the time being, but in order that work might proceed from the floor of the rift onwards, a rope incline was constructed to the summit of the cliff.

The engineers plotted and plodded the whole cliff from summit to base, and at last a means of overcoming it was discovered. The proposal was to carry the line down gently along a grade hewn out of the face of the precipice in order to gain a point 450 feet below. It involved a tortuous location, so that the descent might be worked by adhesion. But it was accomplished. The builders cut their way out of the cliff, hewing a shelf just wide enough to carry the track and no more, and describing marvellous twists and turns. The subjugation of this escarpment constitutes one of the finest illustrations in railway engineering skill that Africa can offer, and it becomes more striking when it is remembered that it is worked by adhesion without the introduction of switchbacks, V-switches, or other solutions which, although clever, handicap traffic. 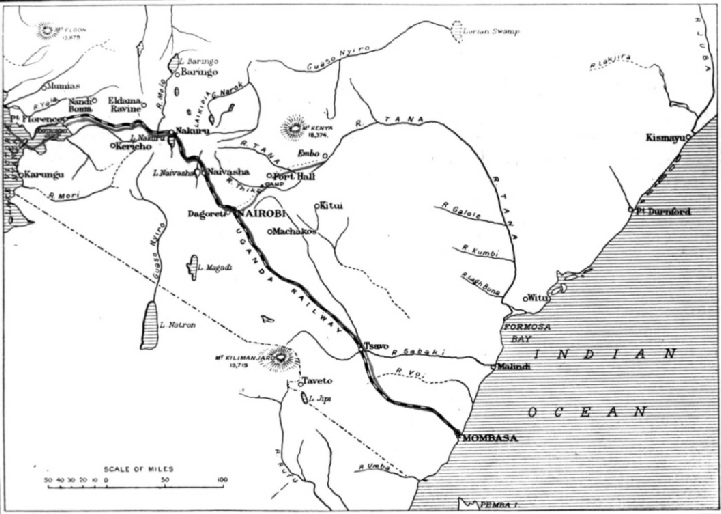 MAP OF THE UGANDA RAILWAY.

After gaining the floor of the rift, another ascent commences through the Masai country. “For every mile of rails laid through the country of the Masai you will sacrifice the life of a white man.” Such was the dictum of an eminent statesman who criticised the idea of building the Uganda Railway. It was not an idle warning by any means, because the Masai at that time were one of the most warlike African races, with their hand raised against every man and every man's hand raised against them. But the white engineers went ahead, despite the lugubrious prophecy, and, so far as they were concerned, they disproved it, because insignificant opposition was offered to their advance. The Masai regarded the steam engine with a kind of awe and extreme curiosity. No doubt they were impressed by the railway builders’ determination to thread their country at all hazards. To-day the Masai constitute one of the most stalwart guardians of the twin ribbons of steel, and are used for policing purposes, owing to some of the lesser tribes having nursed the impression that the railway is an excellent thing to loot.

After passing the station of Elburgon, 474 miles from the coast and 6,820 feet above sea-level, the ground becomes more rolling and broken, as well as threading dense forests, where the wood fuel required for the firing of the locomotives is obtained. The ground, falling away in all directions, is practically a series of successive big humps - through which heavy cuttings have been driven - intersected by deep ravines. The latter have been spanned by lofty steel viaducts. The majority of these bridges are of American origin owing to the United States’ bridge builders at that time being in a position to promise more rapid delivery and at lower prices than their British competitors. At the time there was a great outcry against the purchase of American bridges with British money for a Government undertaking, but the main issue was the completion of the line in the shortest possible time. Under these circumstances the authorities were justified in their action. Still ascending, the railway at last reaches Mau Summit, the highest point, at an elevation of 8,350 feet, according to the bench-mark, 493 miles out of Mombasa. The uphill climb is long and tedious, as may be conceived, but the descent is almost as exacting, since in the course of 91 miles the railway has to drop 4,700 feet. In order to maintain the grade, the railway twists and turns in a bewildering manner, especially at Lumbwa, where a huge horse-shoe curve is introduced, an air-line alignment being found impossible. A few miles beyond Lumbwa, where rocky country is traversed, the railway passes through the only tunnel, 500 feet in length, though it is carried from hill to hill over the deep ravines by numerous steel viaducts. 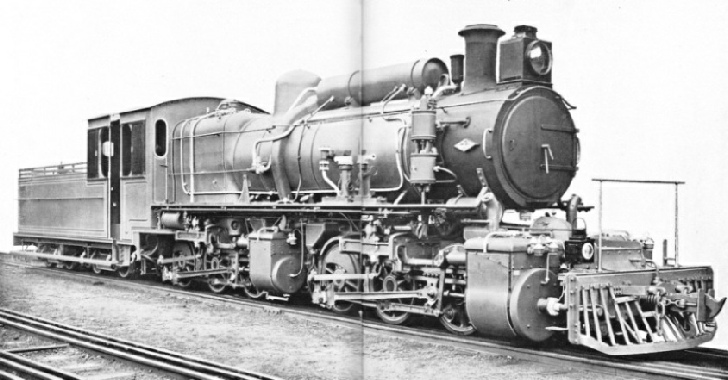 THE HEAVY 0-6-6-0 BRITISH-BUILT COMPOUND MALLET IN SERVICE ON THE UGANDA RAILWAY. The complete narrow gauge locomotive, ready for the road, weighs 91 tons 11 cwt. It can haul loads of 170 tons up a gradient of 1 in 25 at 6 miles per hour.

The waters of Lake Nyanza are reached at Port Florence, where a prosperous town has grown around the terminus. By the Uganda line the fresh and salt waters are brought within 584 miles of each other. The port, at an elevation of 3,650 feet, has a healthy situation, and is developing rapidly, owing to the growth of the steamship traffic upon the lake. These vessels, built in Great Britain, were shipped in pieces to the shores of this inland sea, where a shipyard was extemporised to permit of the reassembling of the parts. The first vessel was commissioned before the railway was built, and the sections had to be transported overland - an undertaking which offered a pretty problem to the engineer entrusted with the task; but the successive steamers were sent up in pieces over the railway.

By the time the shores of the Lake Nyanza were linked by rail to the seaboard £5,500,000 had been expended. Only about half of this amount, however, went into actual work, the other half practically being spent upon freight. By the time the various materials were landed at Mombasa they had doubled in value.

As may be recognised from the fact that the line has to climb to an altitude of 8,350 feet in the 491 miles out of Mombasa, westbound traffic - that is, imports - is costly to operate. But Uganda is such a promising and highly fertile country that within the course of a few years the export traffic should be in overwhelming preponderance. Seeing that the run to the coast for the greater part of the distance is downhill, the demand upon the locomotive effort in this case is not very heavy. Still, the westbound traffic is certain to be the heaviest for many years to come, and accordingly the railway has introduced the most powerful locomotive effort possible. The latest engine is an articulated compound 0-6-6-0 Mallet, built by the North British Locomotive Company, Limited, of Glasgow. This engine has been devised to haul a load of 170 tons up a long gradient of 1 in 25 at 6 miles, and a load of 200 tons up a bank of 1 in 40 at 12 miles per hour, and in each case round curves of 337 feet radius.

PANORAMA OF PORT FLORENCE, the up-country terminus of the Uganda Railway, on the shores of Lake Nyanza.

The locomotive has an over-all length of 62 feet 2⅝ inches, the total wheel base of engine and tender being 48 feet 7 inches. The forward low-pressure cylinders have a diameter of 24¼ inches, while that of the high-pressure cylinders is 15½ inches, the stroke in each case being 20 inches. The driving wheels have a diameter of 39 inches. The rigid wheel base is 8 feet 3 inches; the total wheel base of engine 24 feet 3 inches. The boiler tubes have 1,398 square feet of heating surface, while that of the fire-box is 115 square feet, representing an aggregate heating surface of 1,513 square feet. The fire-grate area is 33 square feet. The working pressure of the steam is 180 pounds per square inch. The weight of the engine in working order is 59 tons 17 cwt., the whole of which is available for adhesion. The tender has a water tank capacity of 2,000 gallons, with a fuel space of 270 cubic feet, and in loaded condition weighs 31 tons 14 cwt. - a total weight of 91 tons 11 cwt. for the complete locomotive.

From the financial point of view the railway has proved a unique success. Rates are comparatively low, the third class passenger being carried for less than ½d. per mile, while goods are carried at about 2d. per ton-mile. The traffic upon the line has exceeded the most sanguine anticipations, and the results have astonished the most enthusiastic supporters of the enterprise. During 1910-11 the revenue aggregated £300,116, while the expenditure was only £201,596, leaving a surplus of £98,520, representing 1·6 per cent. The present service comprises four passenger trains per week in each direction, while the fares for the round journey between termini are £10 19s. return first class, and one half of this rate second class, representing about 2·25d. first class and 1·12d. second class, per mile. Sleeping-cars are provided, although passengers have to take their own bedding; and whilst refreshments are obtainable at certain stations, the passenger is wise if he stocks himself for the trip. The journey from Mombasa to the Lake occupies about forty-eight hours - a striking contrast to the four months’ painful, weary and hazardous toil involved before the coming of the line. The construction of the Uganda Railway offers one of the most illuminating instances in the history of the railway in the complete subjugation of a hostile country, a great deal of which was terra incognita. In fact, so little was known about the land before the engineers arrived that while construction was in progress the surveyors were able to revise the route and to reduce the original location by about 100 miles. 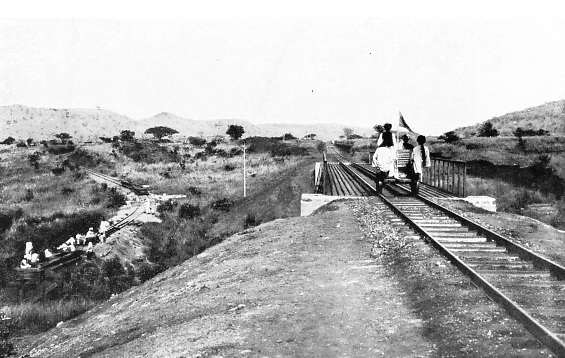 A BIG LOOP ON THE UGANDA RAILWAY to overcome a sudden steep ascent.

[From Part 17 of Railway Wonders of the World by Frederick A. Talbot]

You can read more on “Pioneering in Nyasaland”, “Through Desert and Jungle” and “The Uganda Railway 1” on this website.