On the way to Dymchurch. The top of the cab on the loco has been removed in this photograph.

NEARLY every boy feels at some stage in his early days that the crowning experience of his life would be that of donning overalls and taking charge of a really big locomotive, but few ever realise that ambition. Nearly 40 years ago was born a boy whose ambition went beyond this, for he resolved that one day he would actually control a real railway. That bold ambition was realised on 28th May last when there was completed the final stretch of the fascinating 15-in gauge railway that has been built to link up the ancient Cinque Port towns of Hythe and New Romney on the south-eastern coast of Kent.

The boy referred to is Captain J. E. P. Howey, who has formed an incorporated company under the Light Railways Act. He is the principal shareholder and is taking the leading part both in the construction and operation of the line. Capt. Howey is well known in motoring circles at Brooklands and other racing tracks and owns several famous cars.

The engineer and manager of the line is Mr. Henry Greenly, A.I.Loco. E., the famous designer of miniature locomotives, who has had a unique experience in every phase of miniature railway work.

The Romney, Hythe and Dymchurch Railway serves a district that for the past 40 years has desired a railway. The development has been promised time and time again, and when Captain Howey’s scheme was mooted the populace almost to a man voted for it. Some 20 years ago the Southern Railway applied for powers to establish a similar scheme in this area, but this was to have been a standard gauge line with a single track at an estimated cost of £60,000. It was practically impossible for the district then to justify the expenditure of so large a sum and for that reason nothing came of the project. It is interesting to learn that the approximate total cost of building and equipping the new railway is rather less than half that of the Southern Railway’s scheme, and that Sir Herbert Walker, the general manager of the Southern Railway, has given a considerable amount of practical support to Captain Howey in the development of the line.

A small gauge line, Captain Howey contends, is the ideal feeder scheme for country districts that could not economically support the standard gauge. The Romney, Hvthe and Dymchurch line is in the midst of a popular holiday district, Hythe itself being wonderfully situated, with natural amenities equal to those of many considerably more famous seaside resorts. Dymchurch, hitherto practically isolated, has wonderful sands, while New Romney is an ancient medieval borough close to which is Dungeness, a name with which every toy is familiar. All these places are linked by the little R. H. & D. Railway.

The Romney Marsh is an interesting stretch of country, being land reclaimed from the sea. Its nominal level is low, but there is an excellent drainage system, and at no point will the line be at all waterlogged. The adoption of a small gauge has allowed roads to be tunnelled successfully, for a cutting can go down to 5 ft 6-in in depth without encountering water, and thus the 6 ft 7-in headroom allowed by the Ministry of Transport has enabled the line to be taken under the main road at New Romney and the secondary road at Hythe, at a reasonable cost and with a reasonable alteration of road gradient. 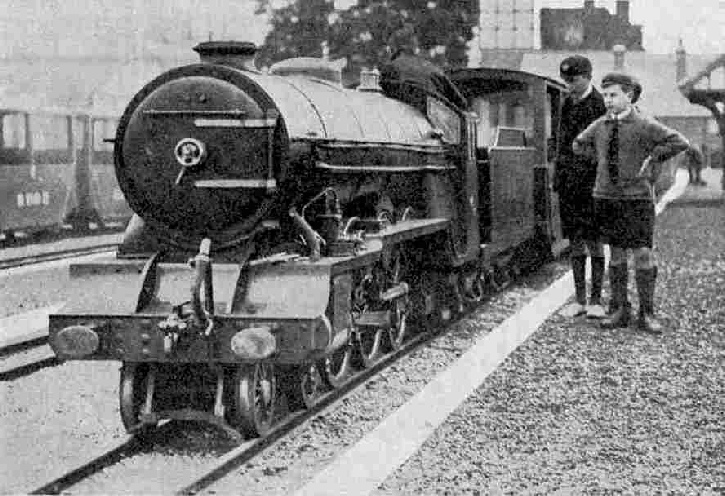 Inspecting the Locomotive at Romney Terminus.

Several main drainage canals and innumerable dykes have had to be crossed in the course of the 8¼ miles track, the largest of these being that adjacent to the Duke of York’s Camp at Jesson. This bridge is a single span skew “N” type girder bridge 56 ft in length, raised on reinforced concrete abutments. The road bridge at The Warren, New Romney, has two tunnels, each 50 ft in length, and was built in reinforced concrete in 5½ weeks.

As already mentioned the gauge of the line is 15-in. This gauge was proposed many years ago by Sir Arthur Heywood, who adopted it for his own private line at Duffield Park in Derbyshire. Later he laid a 4½ mile system connecting Eaton Hall on the Duke of Westminster’s estate with the neighbouring railway station at Balderton, and although Sir Arthur missed perfection in the design of locomotives he proved the usefulness of what he termed the “minimum gauge”. The gauge was therefore adopted for several other pleasure park lines and some 25 years ago the first miniature or scale model locomotive was built. Designs were improved from time to time and in 1913 Captain Howey laid a private line at Stoughton Manor, Huntingdonshire, which was worked by a “Pacific” engine built to the designs of Mr. H. Greenly. In 1915 a narrow gauge (3 ft) line at Eskdale in Cumberland was altered to 15-in gauge and Captain Howey’s “Colossus” was one of the locomotives tried out. Here the engine ran in direct competition with those of the Heywood type and showed a marked superiority in speed and efficiency. Another locomotive j designed by Mr. Greenly, “Green Goddess”, also was tried out on the Eskdale Railway, and a brief account of this line and “Green Goddess’s’’ performance will do more than mere statistics to convey some idea of this engine’s superlative efficiency.

The Eskdale line abounds in steep gradients and sharp curves, and the principal goods traffic consists of stone quarried from the hills. It was in front of a 34-ton mineral train that this miniature locomotive put up its best performance in attaining a speed of 35 m.p.h. without difficulty. On a level and perfect track 40 m.p.h. could have been reached. It should be borne in mind that this load to “Green Goddess” represents 850 tons to its prototype, Mr. H. N. Gresley’s “Flying Scotsman”, which in practice is rarely called upon to tackle more than 550 tons.

The mechanism of “Green Goddess” is designed specially to meet the requirements of miniature railway work, and a very high degree of efficiency is obtained, the coal and water consumption being truly proportionate to the work done. The promoters of the R. H. & D. Railway believed that the miniature scheme could show a better performance than that achieved by the orthodox small gauge engine, and to prove their theory they purchased from the stock designs of an old-established firm of locomotive builders an engine built for use on contractors’ small gauge lines. On runs of over six miles this engine failed dismally in comparison with Captain Howey’s miniature engines. It possessed only half the power and burnt 2½ times as much coal.

From these beginnings the scale of 1/3rd (4-in to the foot) was evolved, mainly with a view to obtaining increased power and speed, and providing for the better comfort of the engine driver. The disparity in size between the locomotives and coaches that must take “full size” passengers has been reduced, and the tenders arranged with a well seat that enables the driver to sit down and be sheltered by the “scale” cab. 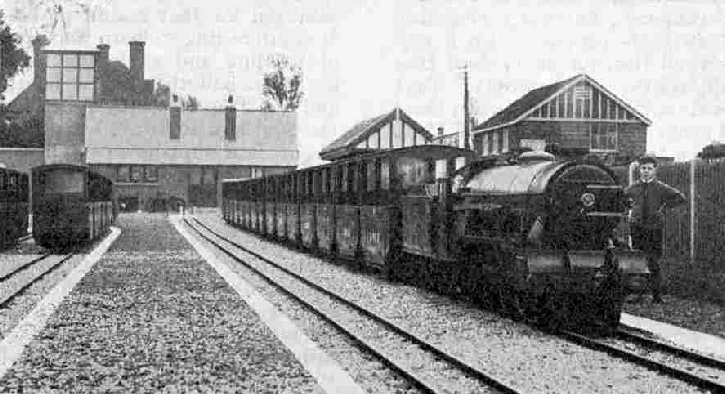 The train standing in Romney Station.

The engines to be used on the R. H. and D. line will be eight in number and will be equipped with piston valves, superheaters, automatic vacuum brakes, pop safety valves, Wootten fireboxes, bogie tenders and every convenience that an engine driver could desire. All are miniatures of main-line types, built to a scale of 4-in to the foot. Three of them - including the famous “Green Goddess” and the “Northern Chief” which are now at New Romney - are of the Great Northern (LNER) “Pacific” type, and two express “Pacifics” with three cylinders have also been built. Two “Mountain” type (4-8-2) tender engines are on order and the locomotive stock is completed by a four-wheeled goods and shunting engine of special design. The standard passenger engines weigh over eight tons. They will haul in regular service a train of 20 carriages at 30 miles an hour with ease. The cylinders are 5¼-in bore by 8½-in stroke. The driving wheels of the express “Pacific” type engines measure 25½-in diameter, and those of the eight-coupled engines are 19½-in. In length the engines with tender total 25 ft. The valve gear is the complete Walschaerts’ type, the prime motion being taken from a return crank on the driving crank. The reversing lever in the cab can be operated with a direct push and pull with a screw “vernier” adjustment, and at the Eskdale trials “Green Goddess” was able to haul a heavy train with the gear linked up to give a valve cut off of 35 per cent, of the stroke.

Semi-open and closed carriages will be used. Sixty of the former, each capable of carrying eight adults have already been constructed, and for the winter traffic the closed cars will be installed. Goods wagons of various types according to the needs of the traffic are under consideration and already sixteen one-ton trucks have been delivered.

In the course of the 8¼ miles of the line there will be five stations and halts. In the layout of these stations the organisers have anticipated maximum requirements in order that the efficiency of the line may not be impaired in the future.

The stations are as follows:-

New Romney (the main terminus) with four passenger roads, locomotive and works buildings, turntable, a carriage shed and an extensive goods yard. The Southern Railway have extended their line into this yard for purposes of goods transfer.

Holiday Camp near Jesson Farm and adjacent to Messrs. Allnatt’s famous children’s holiday-camp. This camp is also known as the Duke of York’s Summer Camp. H.R.H. the Duke of York has displayed considerable interest in Captain Howey’s venture, and when visiting the camp last year he drove a train over the section from New Romney to Holiday Camp. Mr. H. N. Gresley, the LNER Chief Mechanical Engineer, was among the party present, and when it was suggested that a collection be taken for the driver his was the hat that went round. It was quickly filled with small change and at the end of the run was handed to the Duke with due ceremony. The incident caused great amusement and in the end the Duke handed the proceeds to the regular driver of the engine.

Dymchurch (Marshlands), adjacent to the St. Mary’s and Bennington Roads and to the Marshlands Hotel near to the western end of this charming seaside resort. The R. H. and D. Railway thus brings Dymchurch into direct communication with London, and will enhance the popularity of its beautiful stretch of sand,

Dymchurch (Dymchurch Bay and Burmarsh). A halt on the eastern end of Dymchurch on the road to Burmarsh village. From here the line passes under the shadow of Lympne Castle close to the hills under the West Hythe Road to Hythe alongside the southern bank of the Military Canal.

Hythe (Ashford Road). This terminus is close to H.M. School of Musketry and near to the Folkestone omnibus terminus.

It is of interest to note here that the whole of the work of construction, including the permanent way and works buildings, bridges, locomotives, carriages, wagons, and equipment generally, has been carried out to the company’s designs.

The directors of the R. H.and D. Railway think that their present proposals offer a reasonable chance of success, and that as the East Kent coast is a popular holiday centre, there will be sufficient summer traffic to allow the service to be continued during the winter. What they lose on the roundabouts will be made up on the swings! Therefore, in all probability, the inhabitants of the Marsh will be blessed with a service all the year round. 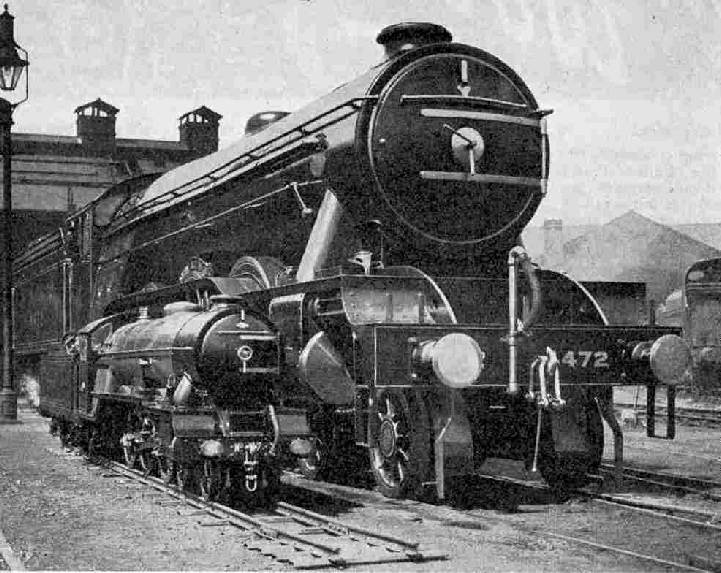 Dignity and Impudence! 3-cylinder “Pacifics”, “Typhoon No. 7” and “Flying Scotsman”. 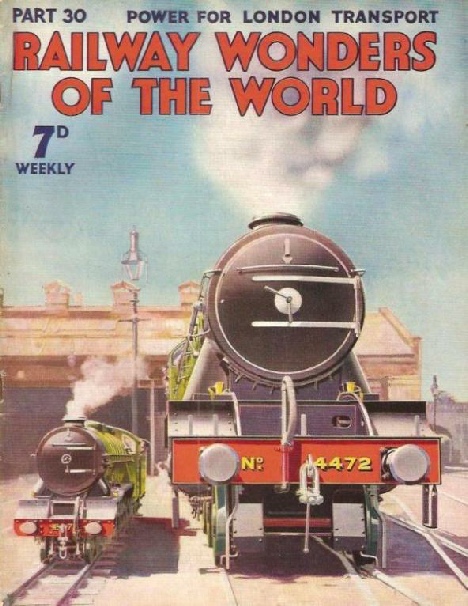 You can read more about

A similar view to “Dignity and Impudence!” appeared as the cover illustration to Part 30 of Railway Wonders of the World