The Art of Abraham Solomon 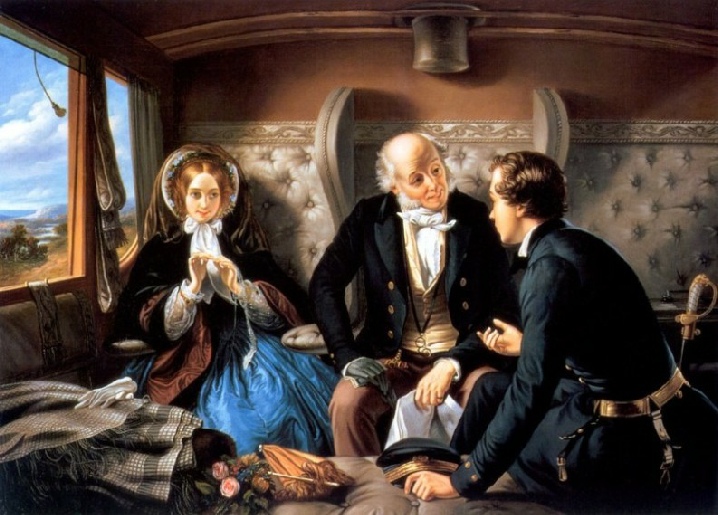 THE Victorian period was an age of astonishing development, with new forms of transport, amazing progress in science, and widespread prosperity. It was natural, therefore, in the days when the camera was still in its infancy, that a picture which recorded the splendid pageant of contemporary life in colour should enjoy popular appreciation, especially when it dealt with railways, a theme of great current interest.

Abraham Solomon’s two railway paintings, Third Class - the Departure and First Class - the Meeting were exhibited at the Royal Academy in 1854 and proved highly successful on both sides of the Atlantic. In the picture above, First Class - the Meeting - And at first meeting loved, the young gentleman is seen in earnest conversation with the captivating young lady under the benevolent eye of the old Pickwickian character. It is interesting to note that in the first version of this painting, the one actually exhibited in 1854, the old gentleman was asleep but that so scandalised the critics that Solomon was obliged to wake him up in the several replicas of the subject he later painted. It is this second version that has become widely known.

In the companion picture, below, the situation was certain to appeal to sentimental mid-Victorian emotions. The young boy is parting, perhaps for ever, from his mother. We learn his destination from hoardings advertising boats sailing to Australia. The picture’s theme would have been of great topical significance for at that time one in every fifteen people living in Britain emigrated to the colonies or America. 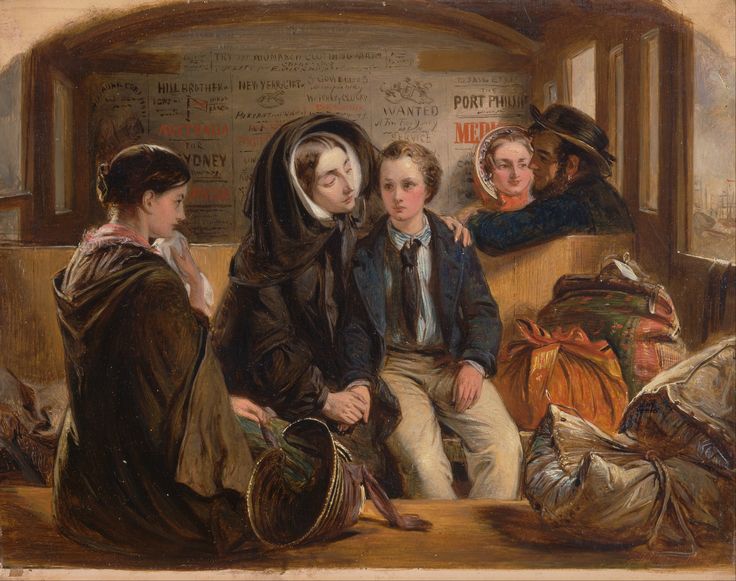 Solomon himself came from an artistic family, his brother and sister also being painters. Prior to entering the Schools of the Royal Academy at fifteen, he had the privilege of studying under the genial and eccentric Henry Sass. Frith records an incident in which Solomon figured. Sass was taking a party of his pupils to Hampton Court, Frith and Solomon sitting behind Sass and the coachman. Suddenly, Sass turned to Solomon and asked, “Why don’t you wear a Gibus collapsible hat?” Solomon replied that “he didn’t see why he should”. Sass, who was wearing a white Beaver, patently non-collapsible, became very excited and said, “I’ll soon tell you why! You can put it in your pocket when you have done with it; if you sit on it you can’t hurt it; you just touch a spring and it shuts up.” Solomon, surprised, asked why Sass did not wear one himself, “I do”, said Sass, “this is one. Do you doubt it? I see you do. Then just look here. Coachman, get up a moment.” The coachman got up and the hat was placed on his seat. He sat down on it and, of course, split it in every direction. “There,” went on Sass, “I hope you are satisfied that I do wear a Gibus”, and he insisted on wearing the battered headgear for the rest of the day. Fortunately, the eccentricity of the teacher seems to have left Solomon unaffected.

Although he cannot be counted among the greats of nineteenth century painting, Solomon explored with greater artistic success than most of his contemporaries the passing world about him.

Ironically, he was elected Associate of the Royal Academy on the day of his death, December 19, 1862. Thackeray, the author, had recommended his election in 1857 on the exhibition of another of his paintings Waiting for the Verdict, perpetuating at the same time the pun “Here is Solomon in all his glory, but he is not RAyed (arrayed) like some of these”

You can read more on “Railways and Publicity” and “Railways in Art” on this website.