A selection of old bridges

A TYPICAL EARLY double-arched road bridge over a railway.

DURING the early development of railways in Britain earthworks were mainly adopted for the levelling out of the track both for economy and ultimate efficiency in preference to any form of bridge work. Bridges were, therefore, kept to an absolute minimum. Indeed it was considered a comparatively simple matter to employ gangs of men to construct earthworks as and where required in order to fill in low-lying areas, but bridges had to be constructed, of course, in order to span rivers, public roads and other rights of way. A curious exception to the rule was in the construction of the London and Greenwich Railway in 1836. Throughout a length of 3¾ miles the line was carried on no fewer than 878 brick arches.

Improvements in the design of railway structures in general and bridge construction in particular soon led to the adoption of a greater number of bridges and viaducts than had otherwise been projected. Any shortage of spoil from a deep cutting along a line of railway did not deter engineers from following their set course. Indeed, in quite a number of schemes engineers found it more economical to bridge a valley with a brick viaduct than attempt to fill in the gap with thousands of cubic yards of loose material conveyed many miles to the site.

In the chapter on Brunel’s timber viaducts, it was noted that a grand total of 54 viaducts were constructed on the South Devon, Cornwall and West Cornwall Railways between Totnes and Penzance. It would have been impossible, of course, to bridge the 54 valleys and rivers with heavy earthworks and, to judge by the length and height of a number of the structures required, it can be readily understood why bricks, mortar and timber played such an important part in Isambard K. Brunel’s designs.

Possibly in no other projected railway scheme of the 1830’s was railway architecture given such careful attention as in the construction of the London and Birmingham Railway — later to form part of the L. & N.W.R. system.

The drawing at the top of this page shows a double-arch bridge of the late 183O’s carrying a public road over four lines of railway. The bridge is of substantial proportions and handsome appearance.

The architect’s drawings show the foundations in detail and in one example the sections show stone blocks for supporting the rails, whereas timber sleepers had already been introduced for the permanent way.

A TYPICAL EARLY railway bridge over a canal.

The drawing above shows a type of bridge built to carry a railway over a canal. A retaining wall is constructed on one side for the towpath below. In this example the railway is about 17 ft above the surrounding fields.

It was generally found that, owing to the unstable nature of the earth on such a site, it was necessary to provide deep foundations under the bridge abutments. It was therefore necessary to drive in a quantity of piles about 20 ft long. Over the head of these piles timber baulks were fixed and between them brick walling was built up. Over the whole area heavy planks were laid to form a raft for the base of the bridge abutments. The raft was then enclosed by timber piling with double timber wallings in order to give support to the whole mass. In this way the whole of the weight and thrust of the bridge could be spread over a large area.

On outdoor passenger-carrying miniature railways where it is intended to cross a small stream on a site “liable to floods”, as usually indicated on an Ordnance map, some form of piling in a more simplified yet practicable form is desirable. A fine example of a 15 in. gauge railway crossing a wide water course is to be found on the Romney, Hythe and Dymchurch Railway where it spans the “New Drain” on a wide stretch of Romney Marsh. 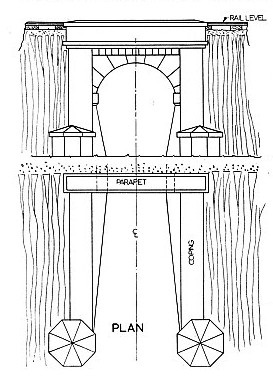 An economy of bridge construction was effected in situations where it was necessary to provide a passage for cattle in open country. In carrying a double line of railway the continuity of a made-up embankment was sometimes broken by a narrow tunnel running through it and measuring some 31 ft between portals. The roadway was no more than 4 ft 6 in. or 5 ft wide, but the details of construction supplied by the draughtsman would be as complete as those required for a bridge spanning a large river.

A TYPICAL EARLY FIELD TUNNEL. The arch would be constructed of brick, with the stone portals and wing walls in faced stone. The decorative octagonal pedestals would have been constructed according to the situation. The wing walls were sometimes splayed outwards.

Large bridges could be adapted for any extent of embankment, but, if taken to a considerable height it was the practice to make the arch of extra thickness and also strengthen it with heavy tie bolts built into the crown of the arch from one end to the other. The diagram above shows details of a nine-arched viaduct with a smaller three-arched bridge approach each end. The main arches are semi-elliptical.

Even as early as 1840, passengers were being encouraged to cross the line by footbridges. In R. Macdonald-Stephenson’s book Railways, published in 1850, mention is made of “the mode of keeping open the communication for foot passengers between the two sides of a line of railway, without crossing on the level, is by means of a bridge”. This is followed by a sketch of the bridge. However, it is merely a simplified diagram of the more complete architect’s elevation and plan given as a plate in G. Drysdale-Dempsey’s book on r and show below.

The bridge is mounted on two substantial masonry columns each side of a double line of railway. Instead of turning both stairways at right angles, they lead in a straight path downward and away from the railway. Another interesting feature of the original drawing is the formation of the double line of railway below the bridge. Here again stone blocks are indicated and not sleepers.

Numerous other examples of bridge construction are given in Dempsey’s work of which only a few are noted here. Details are given of bridges on the Newcastle and North Shields, the Birmingham and Derby and for the Bricklayer’s Arms branch of the South Eastern Railway; likewise a number of well-known structures on the Great Western Railway receive attention, namely, the Wharncliffe Viaduct at Hanwell, the bridge over the River Thames at Maidenhead and the Bath viaduct.

Whilst many of the early structures have been replaced by larger and heavier steel bridges designed to carry heavier and faster trains than those ever envisaged by their designers, some of the smaller structures are still extant. As G. Drysdale-Dempsey himself noted, “This subject has of course occupied the careful attention of railway engineers, and the experience already obtained has produced many splendid examples, which unite sufficiency and economy in a high degree . . . and every one who receives the charge of railway works should feel himself stimulated to a thorough consideration of this subject.”

DESIGN FOR an early railway footbridge.

You can read more on “Brunel’s Timber Viaducts”,  “Famous Viaducts” and “Over River and Lake” on this website.