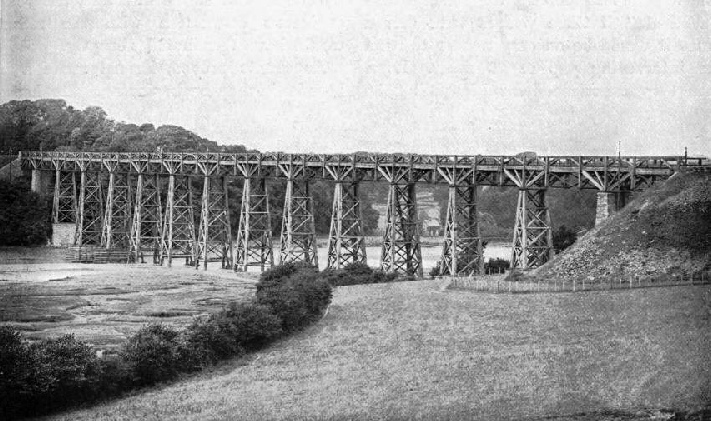 ONE OF BRUNEL’S TIMBER VIADUCTS in Cornwall, since replaced in steel.

BRUNEL’S timber viaducts were to be found from Totnes in Devon to Penzance in Cornwall and on the Falmouth branch from Truro. Originally, three separate companies were concerned, namely, the South Devon Railway (Exeter to Plymouth), the Cornwall Railway (Plymouth to Truro) and the West Cornwall Railway (Truro to Penzance). It has been officially recorded that the aggregate length of the 34 viaducts between Plymouth and Truro was no less than four miles. Indeed, a striking feature of the railway system in the Royal Duchy is the frequency with which the lines have to span deep, wide valleys. There were but few cuttings from which material could be utilised for embankments and so reduce the length of these structures.

The highest viaduct was the St Pinnock — 18th on the route — standing 151 ft above the floor of the valley and 633 ft long.

It was not until 1934 that the last of the old timber structures was dismantled and replaced by a masonry structure. This was the Collegewood viaduct near Penryn on the Falmouth branch.

(Note: Plymouth to Truro 34, and Truro to Falmouth 8 viaducts.)

The general design of Brunel’s timber viaducts consisted of masonry piers 66 ft apart — or one chain in railway surveyor’s terminology — and were carried upward to within 35 ft of rail level. The more lofty piers were suitably strengthened by buttresses.

The timberwork carrying the road bed rested on three longitudinal beams tied together by notched transverse beams at regular intervals. From the top of the piers four sets of supporting struts radiated so that each longitudinal was equally supported over its span between piers. These long struts were secured in position by cast-iron shoes anchored to the pier and stiffened by diagonal timber bracing. In a number of instances extensive use was made of long tie bars between piers and also diagonally.

These slender and graceful timber structures were not confined to straight lengths of railway, but were to be found in situations where the railway spanned a wide valley on a wide sweep of a curve normal to railway practice. 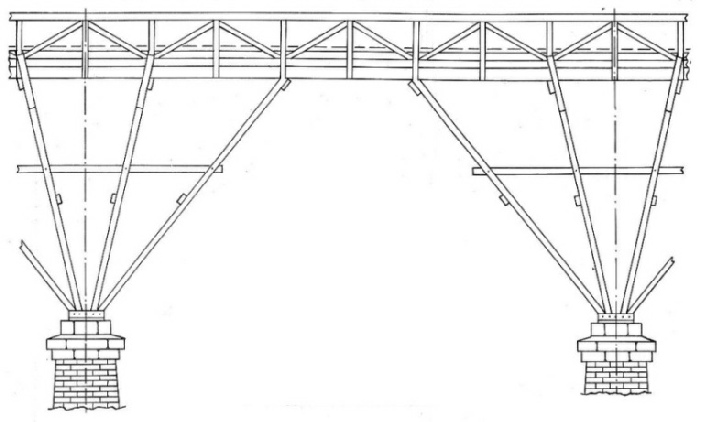 DRAWING OF A TYPICAL SPAN in one of Brunel’s timber viaducts.

Among the earliest works constructed by the old Cornwall Railway to Brunel’s designs were the Truro and Carvedras viaducts; one following upon the other. Carvedras was just over 1,000 ft long and 83 ft high, and Truro 1,329 ft long, with the level of the rails no less than 92 ft above the streets below. The first named viaduct was made up of 17 spans and the latter of 21 spans. Both viaducts were designed for a single line and were 14 ft wide between parapets. The masonry piers were carried up to within 32 ft of rail level, otherwise the method of construction was similar to others of Brunel’s design. Yellow pine was largely used for the construction of these viaducts. For the safety of the permanent-way workers, bays were constructed at each mid-span and alternately on one side and then the other side of the track.

It has already been remarked that Brunel’s viaducts were of slender design, as shown in the drawing of a typical span shown above. The height of the masonry piers above ground level depended on the slope of the surrounding terrain forming the valley, but their tops were uniformly level throughout.

The external elevation shows four struts radiating fanwise from the shoe, but actually there is a veritable nest of struts and diagonal members splayed in this manner; in fact there are four additional struts rising fanwise and inclined inwards to support the central longitudinal beam and forming a V joint at the centre.

It should also be noted that extra stiffening members were bolted to a pair of the main outer struts and carried up to parapet level. These would appear to have been a later addition to give lateral stability to the viaduct in order perhaps to carry heavier and faster trains than had been envisaged in the early years of its existence.

CROSS-SECTIONAL DRAWING OF A TYPICAL SPAN in one of Brunel’s timber viaducts.

Another type of timber viaduct was designed by Brunel for crossing tidal creeks. It was in effect a multiple-span bridge carried on trestles rising from the sea bed. 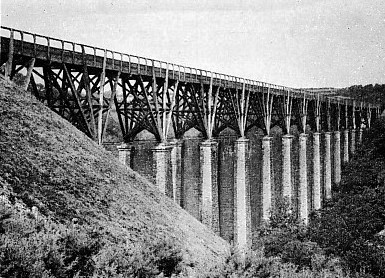 You can read more on “Early Railway Bridges”,  “Famous Viaducts”, and “Over River and Lake” on this website.