Some Striking Continental and American Monsters

WHEN the Servian Government decided to introduce the Mallet locomotive upon its system, and forthwith called for tenders, the conditions which had to be fulfilled were somewhat exacting. The engines were required for both passenger and heavy goods service upon the line traversing the difficult mountainous country, abounding in heavy grades and sharp curves, between the town of Paratschin and Saitschar, near the Bulgarian border.

The gauge is 760 millimetres - 30 inches - and the permanent way permits of a rail pressure of 8 tons. The specification demanded that the tender locomotives should be able without difficulty or trouble to haul a train of 350 tons up a gradient of 1·4 per 100 and a train of 180 tons up a bank of 2·8 per 100, and round S-curves of 195 feet radius, at a speed of 15 kilometres - 9·3 miles - per hour. An initial stable of five Mallet locomotives was ordered, and the well-known engineering

firm of A. Borsig, of Tegel, secured the contract.

The engine is six-coupled. The front axle is connected with the first coupled axle by a Krauss-Helmholtz frame. In the case of the back frame the weight is supported by strong and somewhat rigid springs, but more flexible springs are used for this purpose on the front frame, so that it can adjust itself easily on curves. The members of both frames lie on the inside. The distance between the frames is only 24 inches, and between the bearing centres 20 inches. Despite this small space between the points of support and the high boiler position of 75 inches from the top of rails, the engine runs very steadily, even at a speed of 18·6 miles per hour.

The boiler, for brown coal fuel, is of ample proportions. The tubes measure 13 feet 1½ inches between tube plates, and have an internal diameter of 1 9/16 inches. The grate extends over the frames and wheels, and has a width of 41⅝ inches and a length of 71 inches. Owing to the position of the boiler above the rail level an inclined grate and a special furnace arch were necessary.

The high-pressure cylinders have a diameter of 13 inches, while the low-pressure cylinders are 20½ inches in diameter, with a common stroke of 15¾ inches. The driving wheels are 31½ inches in diameter. The wheel base is 25 feet 6 inches. The total heating surface is 1,170 square feet, and the grate area 20·5 square feet. Steam is used at a pressure of 190 pounds per square inch. The engine has feed tanks capable of holding 1,200 gallons of water, and bunker capacity for 2 tons. In service conditions the engine weighs 50·9 tons, of which 45·1 tons are available for adhesion.

This firm of locomotive builders also constructed an interesting and powerful locomotive for the Sand Railway Company of Gleiwitz. There are four collieries in Upper Silesia which are supplied by the above firm with sand, which has to be trans-ported a distance of some 14 miles, the train load comprising 20 self-discharging wagons. This line, of standard gauge, was laid specially for this traffic, and permits a weight of 18 tons upon the rails. The road abounds in curves, and has a max-imum gradient of ·77 in 100.

The conditions called for a locomotive with a flexible, and not a fixed, wheel-base. The front axle is connected with the first coupled axle by a Krauss-Helmholtz frame, whilst the rear coupled axles have side clearance. The weight of the engine is supported at six main points, the springs being arranged under the axles. The frame is of very solid construction, the main plates having a thickness of If inches. Support at the cylinders is secured by means of plates and angles of box construction. Between the frames is a water tank, which also gives support to the frame.

In order to conform with the admissible service weight of 96·5 tons, a boiler of very high capacity has been provided. There are 148 boiler tubes and 24 superheater tubes disposed in three rows, and a specially large fire-box, giving a total heating surface of 2,550 square feet. The grate area is 35 square feet.

The diameter and stroke of the cylinder are 25¼ inches. The driving wheels are 49¼ inches in diameter. The fixed wheel base is 9 feet 6 inches, and the total wheel base 27 feet 6 inches. Steam is used at 180 pounds per square inch. There is capacity for 12 tons of water and 2½ tons of coal.

An unusual expression of the Mallet locomotive is that engaged in the freight service of the Atchison, Topeka, and Santa Fe Railway. In this instance, not only is each set of drivers carried in an individual frame, the two being hinged together, but the boiler itself is flexible, being made in two sections united by a hinge or “accordion” joint, so-called because the connection resembles the bellows of that musical instrument. Both sections of the boiler are rigidly connected to their respective frames, but the provision of the accordion joint permits the boiler to bend when negotiating curves.

This locomotive was built at the Philadelphia shops of the Baldwin Locomotive Company. The high- and low-pressure cylinders have diameters of 24 and 38 inches respectively, the stroke being 28 inches. The steel boiler has a diameter of 70 inches, and works at a pressure of 220 pounds per square inch. There are 290 fire-tubes of 2¼ inches diameter by 19 feet 7 inches in length between tube plates; 340 feed-water heater tubes of a similar diameter by 7 feet 8 inches in length, the latter being disposed in the front section of the jointed boiler. The heating surface of the fire-box is 237 square feet; fire-tubes 3,390 square feet; feed-water heater tubes 1,533 square feet; and fire-brick tubes 16 square feet, giving an aggregate heating surface of 5,176 square feet, while the grate area is of 63 square feet. The locomotive is also fitted with the Jacobs superheater - 318 square feet surface - and reheater - 637 square feet surface.

The engine is of the 2-6-6-2 type, the front truck wheels measuring 31¼ inches, and the trailers 40 inches in diameter. The outside drivers are 69 and the centre drivers 62 inches in diameter respectively. The weight upon the driving wheels, and consequently available for adhesion, is 157·15 (US) tons, and of the engine in running order 195·9 tons. The 8-wheeled tender has tank capacity for 9,000 gallons of water and 12 tons of soft coal fuel, which, combined with its own bulk, brings the total weight of the complete locomotive ready for the road up to 278½ tons.

THE HUGE POWERFUL BALTIC (4-6-4) LOCOMOTIVE OF THE CHEMIN DE FER DU NORD. These engines, which haul the fastest train in the world, weigh 158½ tons upon the rails. They are able to draw a train weighing 400 tons at 75 miles per hour on the level, and at 60 miles per hour up grades of 1 in 200.

The fastest trains of the Chemin de Fer du Nord of France are handled by powerful Baltics - 4-6-4 type - designed by Monsieur Asselin, the mechanical engineer-in-chief to the system. They are compounds, having two high-pressure cylinders each 17·3 inches in diameter and a stroke of 25·19 inches, and two low-pressure cylinders with a diameter of 24·41 inches and a stroke of 28·74 inches. Although superheating is practised, steam is used at a pressure of 227·5 pounds per square inch.

Ready for the road the engine weighs 102 tons, of which 54 tons are disposed over the drivers, and available for adhesion. The tender is of the Nord standard eight-wheel type, weighing loaded 56½ tons, so that the weight of the locomotive under service conditions is 158½ tons.

With these engines a train weighing 400 tons is able to attain a speed of 75 miles upon the level, some 2,000 horsepower being developed in the cylinders. On grades rising 1 in 200 a speed of 60 miles per hour is sustained. 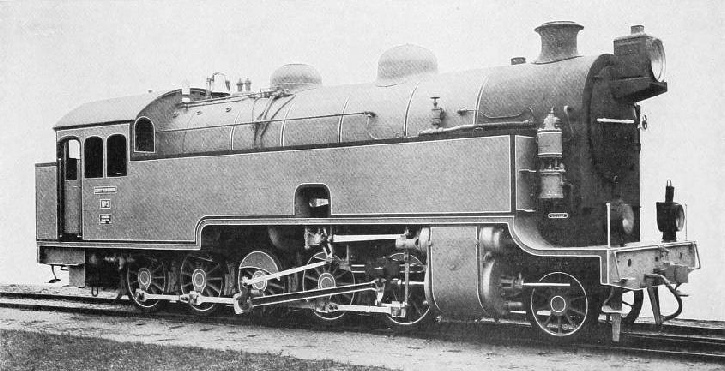