THE “BRAMHAM MOOR” is one of the LNER’s latest 4-4-0 express passenger locomotives, belonging to the “Hunt” class. These engines are similar to the D49 “Shires” with the exception that they are equipped with R.C. poppet valve gear. Cylinders measure 17 in by 26 in, diameter of driving wheels is 6 ft 8 in, and the boiler pressure is 180 lb per sq in. The heating surface, including superheater, totals 1,669½ sq ft, and the tractive effort is 21,556 lb. 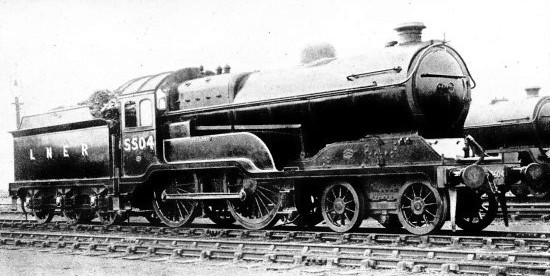 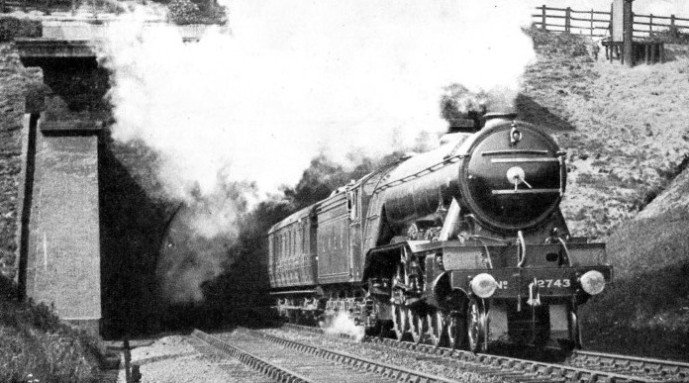 Among the largest express passenger locomotives in Great Britain are the LNER three-cylinder “Pacifics” represented by “Felstead”. Striking features are the large boiler and firebox, which has an area of 215 sq ft. The total heating surface is 3,455 sq ft, and the latest engine of the type have a boiler pressure of 220 lb.

A “CASTLE” CLASS ENGINE, used for certain of the fastest express services on the GWR. This engine has four cylinders 16 in by 26 in, a total heating surface of 2,312 sq ft, coupled wheels 6 ft 8½ in diameter, boiler pressure of 225 lb, and a tractive effort of 31,625 lb.

ONE OF THE FAMOUS “KING” CLASS engines [“King James I”] which work the principal express services to and from the West of England is shown here. These engines have a 6 ft 6 in coupled wheels, a boiler pressure of 250 lb, and four cylinders 16¼ in by 28 in.

THE SOUTHERN RAILWAY uses 4-4-0 “Schools” class engines on lines where the route does not permit the running of larger and heavier locomotives. “Rugby” (top) has three cylinders 16½ by

“LORD NELSON”, a Southern Railway express locomotive, and the first of the class of that name. This powerful engine has four cylinders 16½ in by 26 in. Driving wheels have a diameter of 6 ft 7 in and the engine and tender weigh, in working order, 140 tons 5 cwt.

A TURBINE-DRIVEN 4-6-2 LOCOMOTIVE introduced in 1935 by the LMS. Propulsion by cylinders and the normal reciprocating motion has been replaced by a turbine drive. The locomotive has a 2,000 hp non-condensing multi-stage forward turbine, using steam at 250 lb per sq in and a reverse turbine of the impulse type. The turbine drives the leading coupled axle by a train of gears. Steam to the main turbine is brought from the boiler to a steam chest formed as a steel casing. This steam chest contains six control valves operated from  the cab. From the chest, steam is taken by pipes to groups of nozzles in the high-pressure end of the turbine casing, and each nozzle group is controlled by one of the six valves. Power is developed in the turbine, and the speed of the engine increased by opening these valves. The weight of the locomotive has been kept down despite the extra load of the turbines, and its total weight in working order is only 109 tons. Driving wheels are of 6 ft 6 in diameter. The boiler has a total heating surface of 2,967 sq ft, and the area of the fire-grate area is 45 sq ft. The tender has a coal capacity of 9 tons and can carry 4,000 gallons of water. Together, the turbine engine and its tender weigh 163 tons 13 cwt, and have a total length of 74 ft 4 ¼in. 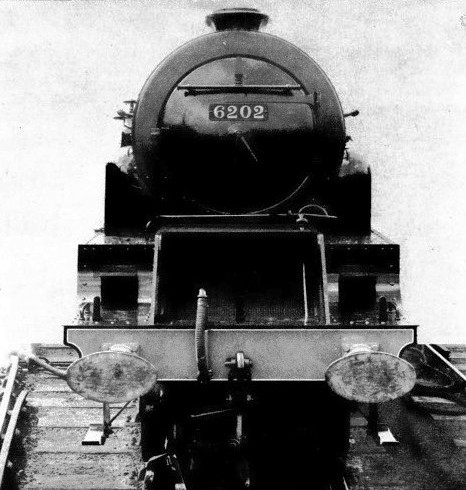 You can read more on “British Express Locomotives”, “A Famous Locomotive Type” and “Speed Trains of Britain” on this website.