No. 453 “King Athur”, the original of the 4-6-0 type of express passenger locos of the Southern Railway.

A BATCH of ten 4-6-0 rebuilt superheater express locomotives numbered 448-452 and 453-457, are now being constructed at the Eastleigh works of the Southern Railway. The first two locos of this class, Nos. 453 and 454, are named “King Arthur” and “Queen Guinevere” respectively. Both are now in service and the remainder will be completed and put into service shortly.

Before rebuilding, the locos had wheels of 6 ft diameter and four cylinders, 15-in diameter by 26-in stroke, driving on two axles. As rebuilt they are similar to the latest London and South Western express locos, however, and have 6 ft 7-in wheels. Various modifications have been introduced by Mr. R. E. L. Maunsell, C.B.E., the chief Mechanical Engineer of the Southern Railway.

There are now two cylinders, 20½-in in diameter by 28-in stroke, and a working steam pressure of 200 lb per sq in. The valve gear, has been altered to give a longer travel of about 6in to the piston valves in full gear.

The boiler is standard for the class, but it is fitted with the Maunsell superheater, having Header vacuum relief valves, Ross safety valves, and a larger chimney. The Ashford sight feed lubricator is arranged to feed into the steam pipes that join the cylinders outside the smoke box.

The overall dimensions of the locos have been reduced in height and width to enable them to be worked on any section of the Southern Railway. Pumps are fitted to maintain the vacuum for the brake. The tenders are of the original design, but the wells and the Drummond feed water heater have been removed.

The leading dimensions and particulars of weights, etc, are as follows :— 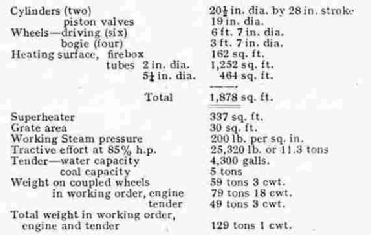 Locomotive No. 453 (“King Arthur”) has already been put into main line service with quite satisfactory results. It was attached to the 1 p.m. Express, Charing Cross to Folkestone (central), the load of which was specially strengthened to consist of eight double-bogie coaches and five Pullman cars, a total weight behind the tender of 413 tons, exclusive of passengers and luggage.

Although the locomotive was restricted to a maximum speed of 60 miles per hour, the journey was accomplished over this unusually difficult section of railway several minutes within the regular booked timing.

The policy has been adopted of giving names to the new and rebuilt engines, bearing some relation to the districts in which they are destined to serve.

The 4-6-0 giant express locomotives of the “King Arthur” class will each be named after one of the Knights of the Round Table.

Thousands of holiday-makers in days gone by have clambered over the rocky old fortress known as King Arthur’s Castle, perched high up on Tintagel cliffs in North Cornwall. Equally as many have visited the little town of Camelford, which is the Camelot of King Arthur’s Legends, and Slaughter Bridge where King Arthur is supposed to have fought his last battle.

It is therefore very appropriate that the new engines should be named after the Knights of the Round Table, as many of them will be in the holiday traffic to the romantic district known as “King Arthur’s Land”. Ten will also be put into traffic this summer on the boat train services from London to Folkestone and Dover.

Hitherto the working of these important trains has been confined to locos of the 4-4-0 type (various SE and CR classes) owing to weight restrictions on certain bridges, etc, which as the result of various strengthening operations have recently been removed. Apart from the 2-6-0 mixed traffic locos, designed by Mr. Maunsell for the late SE & CR, the new type will be the first six-coupled passenger locos to work on this section.

The following is the list of names of the “King Arthur” class locomotives:- 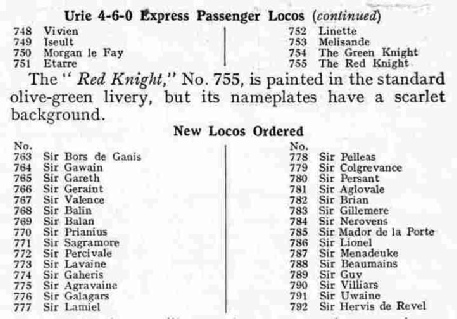 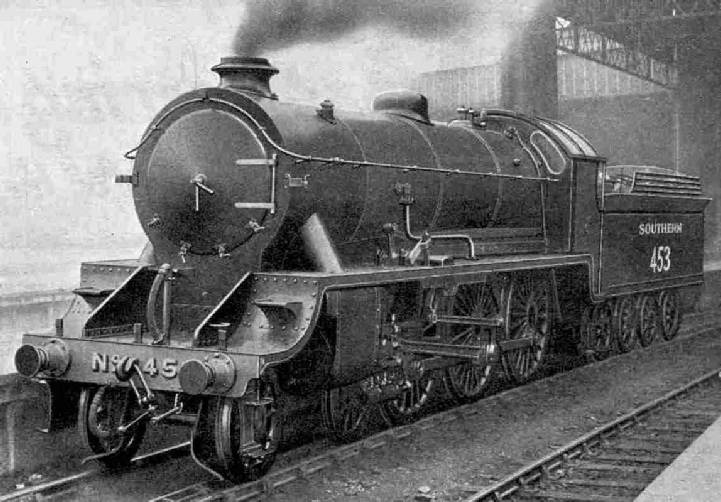 The “King Arthur” outside Victoria.

You can read more on “British Express Locomotives”, “The Golden Arrow” and “The Story of the Southern” on this website.