A Run on the “Twentieth Century Limited”

At the Throttle of a Giant “Pacific”

One of the giant Pacifics that haul the “Twentieth Century Limited”.

HAVE you ever wished that you could exchange places with one of the engine crew of a famous “Limited” express, in order to experience just for once the thrill of piloting one of these huge steel giants? Unfortunately it is given to few actually to stand at the throttle, but “second-hand is next best”, and I want readers to come along with me in imagination. I want them to sit at my elbow on the footplate of No. 596, which is to pilot our portion of the “Twentieth Century Limited” America’s most famous train, from Boston, traversing the 200-mile main line of the Boston and Albany Railroad to join the New York portion at Albany, New York.

Now that we are all quite ready, let us go along to the engine-house and prepare our locomotive for the road. First of all, however, we must examine the bulletin board. On this board are shown plainly any changes in signals, notices concerning reconstruction work in progress, and any other running changes that affect the tracks over which we are to go. All these, of course, we must note carefully.

A few yards farther on and here we are! No. 596, one of the newest productions of the American Locomotive Works, is standing, bright and shiny, awaiting us. She - this engine of ours is too nearly human to be coldly termed “it” - incorporates everything new for securing economical power. She is a “Pacific” of phenomenal size, and to the trailer axle she has geared

an auxiliary engine known as a “booster”.

Now we climb aboard and start up the turbo-generator, which sets every cab light gleaming and energises the automatic train control apparatus. Next we start the air compressor and observe closely the gauges that indicate the pressure. Now, while you are watching the fireman as he inspects and oils the mechanical stoker, I will oil the valve motion connections and one or two other vital points, and then away we go!

Backing slowly across the turntable, we stop to take water and coal and then move off to the Union Station, where on track four our train of nine 100-ton Pullmans is waiting. Coupling-up is the work of only a few minutes, and after charging the train air-brake pipes and cylinders we make a test, to ensure that everything is in perfect working order. If the weather conditions demand it, steam heat must be applied from the engine to the entire train. This steam is used also to heat water for the use of the barber and for various other purposes.

And now we have just a few minutes to spare in which to examine our “make up”, so we will pass quickly along the platform and take a peep into the Pullmans. The first car is a combination baggage and buffet car. Here the chairs are arranged as in a club room, and every facility is provided for the business-man. A porter attends to the needs of the passengers and serves refreshments from a buffet located at one end of the car. The next three cars are of the regular Pullman drawing-room type. Then comes the diner, followed by four more Pullmans, the last of which bears a large illuminated sign that reads “The Twentieth Century Limited”. Now we must hurry back to the engine as time is getting short. 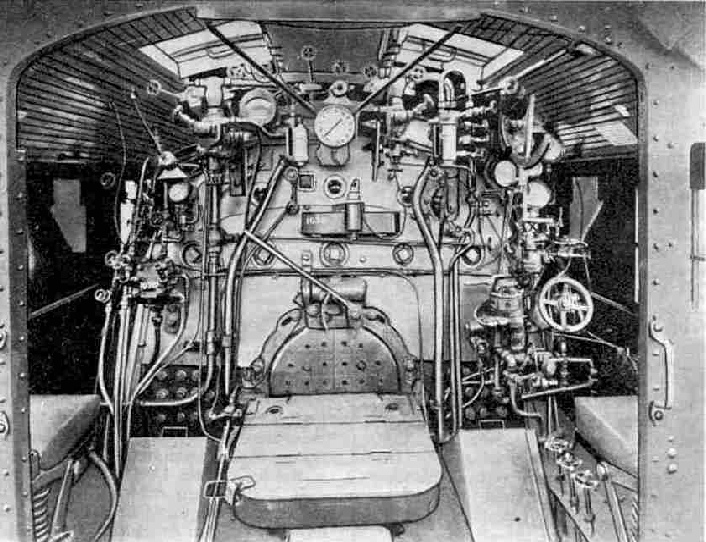 The cab of one of the giant Pacifics that haul the “Twentieth Century Limited”. This photograph gives an excellent idea of the complexity of the controls, etc, as compared with those of a British locomotive.

Just before we receive the starting signal let us take a look at the controls and gauges in the cab. Note how easily the engineer and the fireman can reach every lever and valve without leaving their cushioned seats. The gauges are all placed on one well-illuminated instrument panel, recalling the engine-room of an ocean liner. Where possible every steam pipe is placed outside the cab. Storm curtains to make the cab wind-tight and storm-proof in winter are coiled up ready for use.

Now look into the firebox. All you can see is just a few live coals and some ashes, and you wonder what will happen when the engine starts to exhaust on that fire! Well, watch closely. You will see that when the fireman starts the stoker the fire gradually brightens until it becomes a snow-white sheet of flame all over. This, of course, would not be possible under the old system of hand firing.

Look, there is the starting light gleaming, and here comes the “Right Away”. Open the throttle and we’re off - 12.30 p.m. on the dot! It is a smooth, easy start too, for we cut in the booster to provide us with the additional power that renders all jerks entirely unnecessary.

Our engine soon settles down to business, and it is indeed surprising how easily these new engines handle in spite of their enormous size. The road ahead of us is very heavy and curves abound, so that here we shall have little time to watch the scenery. Our first stop is Worcester, 44 miles from Boston. Here we feel our bearings and prepare for the hard climb to Charlton Summit.

Now you will hear “596” bark! We are three minutes late, too, so that we must gather all the speed we can. Over the first couple of miles of level track in order to get a run at the hill. As the gradient gets steeper we feed the “notches” to our engine until the exhaust becomes a continuous roar. Peep into the firebox now; you see only the same snow-white flame and nothing more. The coal actually is consumed in mid-air as it falls from the elevators and all that remains on the grates is just ashes. No human fireman could keep pace with our engine now, but the mechanical stoker does all that is necessary quite easily.

Here is Charlton Summit, and we have picked up two minutes. From now on as far as Springfield the gradients are not so severe and the engine may be eased a little. With ordinary luck we shall make Springfield on time, which means 140 minutes for the 100 miles - quite lively enough when the heavy grades we have encountered are taken into consideration. 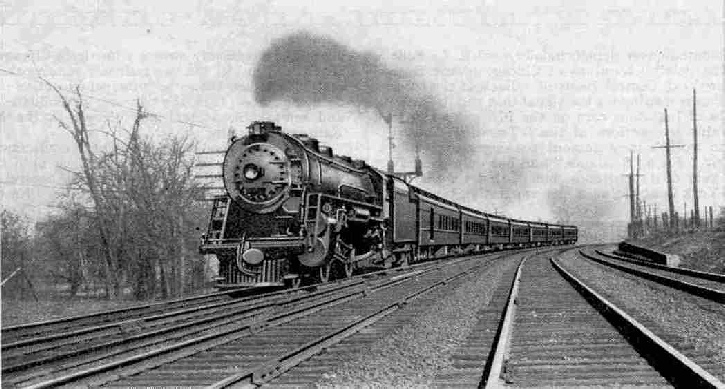 The “Twentieth Century Limited”, hauled by locomotive No. 596.

A few minutes later we swing into the New Station at Springfield exactly on schedule time. Water is running low so we must till up our tank and, while the rod cups - which are lubricated by hard grease - are being filled, “596” is once more examined for warm bearings. We leave Springfield promptly to time and the next few miles take us along the banks of the Westfield River. From this point onward the scenery is wonderful. Here the famous Berkshire Hills start to rear their lofty heads and the booming exhaust of our engine echoes and re-echoes through the chasms. Climbing all the way to Chester, 26 miles from Springfield, we come to the foot of the famous Mount Washington. At this point we tackle our stiffest climb for the gradient rises 90 ft to the mile - 1 in 59. The steep rock cuttings through which we climb as they echo our roaring exhaust seem to be bellowing encouragement to the engine as She is “thrashed” to her utmost limit.

Upward we go until at last, after 62 miles’ continuous climbing, we reach the summit of Mount Washington, From here after a sharp drop to Pittsfield, where we may touch 70 to 80 m.p.h. the scenery is just one beautiful panorama after another.

Through sleepy towns and villages we tear, the speedometer hanging steadily on at the 72 mark, until, as we start to cross the historic Hudson River we commence to decelerate in readiness for our entry into the great Union Station at Albany, New York. Here, two minutes to the good, we detach our train, leaving it to be taken forward to Chicago by one of the new “Hudson Speed” type of engines of the New York Central. Re-crossing the Hudson River we reach our resting place where “596” will be thoroughly inspected and washed in preparation for the return on the morrow.

No doubt you feel ready now for a wash and a sleep but that does not prevent tongues from chattering. How, asks some-body, would that great “Hudson Speed” or even our gallant “596” look at the head of the “Cornish Riviera” express! That reminds me of an amusing little incident that occurred to me quite recently. That day I was driving “598” on the “South Western Limited”. We rolled into the terminal station of Boston and a few minutes later as I was looking over the engine a young fellow addressed me. It did my heart good to hear him speak. I am from England myself, you know, and he was from good old Lancashire! He was greatly interested in the engine and after a few moments’ conversation he mentioned that he was an ex-Lancashire and Yorkshire Railwayman. I asked him how the engine would look running into Exchange Station. Liverpool. “By gum!” he replied, “I don't believe the beggar could get in!” 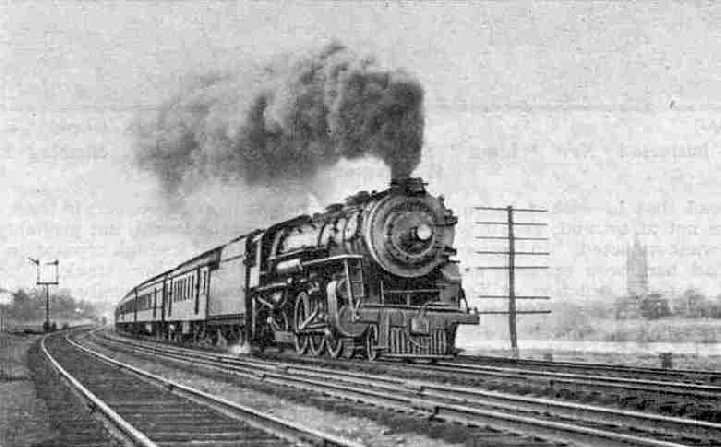 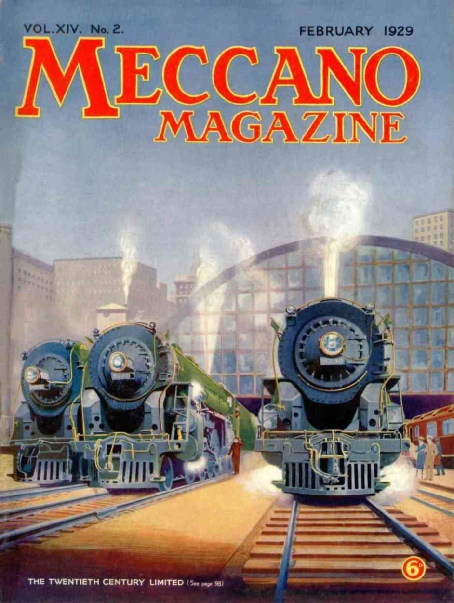 You can read more about

“The Santa Fe Chief” and