“ACCIDENTS will happen”, the proverb tells us, “even in the best-regulated families.” Railways are no exception to the rule; and yet it is worth stopping for a moment to reflect on the remarkable pitch of safety to which railway travelling has been brought in this country. The average number of travellers who have lost their lives while making journeys in British trains, over a number of past years, has been only eight a year.

Yet something like 2,500,000,000 railway journeys are made in the British Isles every year. So the chances of being involved in a fatal accident when you step into a British train are not very terrifying - they amount to one chance in about three hundred millions! It has rightly been said that the inside of a British train is one of the safest places to be found the whole world over.

But careful provision has to be made by the railways, all the same, for dealing with accidents. Located at various convenient points on each line are “breakdown gangs”, as they are called; their duty is to hasten to the scene of the mishap, and clear the line of the wreckage. Each gang has at its disposal one of the powerful “breakdown cranes” shown in these pictures, as well as many other appliances to help in the work of clearance, and to put on the rails again the vehicles which may have left them, if they are not too badly smashed. 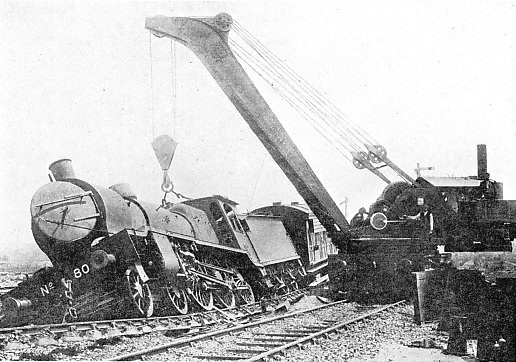 THE BREAKDOWN CRANE AT WORK.

The first of all duties, of course, is that of rescuing any people who may still be imprisoned in the wrecked train; clearing the line in the shortest possible time and at all costs is the next task, in order that the running of the trains over it may be resumed. 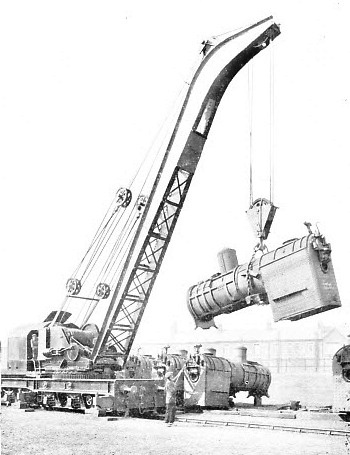 Considerable ingenuity is called for in the design of these cranes, which, despite their size and power, must be able to pass under all the bridges and tunnels on the way to the scene of their operations. For this purpose the long arm, or “jib” of the crane is lowered, when running, into a horizontal position, and carried on one or two “guard” trucks; the crane chimney also is taken down.

Here we see a steam crane of a kind largely used upon the railways. It can travel upon the rails just like any railway vehicle, in fact it can form part of a fast train. When not in use the tall “jib” is lowered until it rests flat upon a truck which is provided for the purpose. When at work, as is clearly shown, it is clipped down upon the rails and also steadied by timbers upon the ballast. A crane, an engine and a few vans with tools, form the “breakdown train”.

You can read more on “Accidents and the Breakdown Train”, “Railway Signalling” and “The Railways’ Daily Work” on this website.