Stations and Their Story 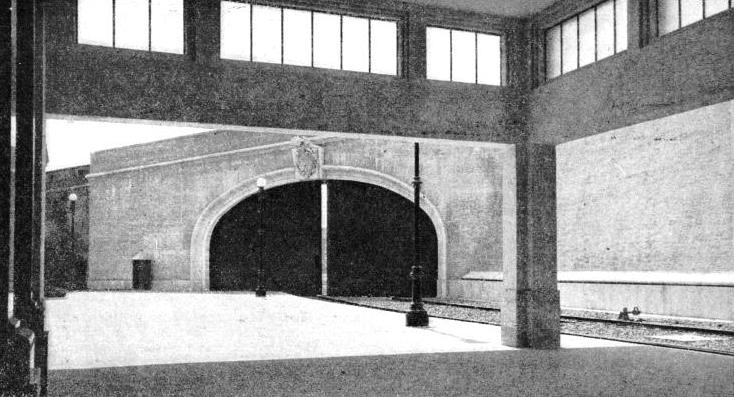 AT THE VATICAN. Under a treaty in 1929 the Vatican state was recognised as independent territory. The private station is served by a branch line off the ordinary Rome Railway. Usually there is no traffic and the bronze doors – seen in the picture - in the walls round the Vatican open only to admit a special train conveying some high church dignitary to the Vatican city.

THE odd and the unusual are not generally associated with the railway, which, in its endeavour to be severely practical, must eliminate anything that is likely to impede progress and efficiency. But, in spite of this, many curiosities do exist. For the most part they have their practical uses, but some of them are survivals of a more romantic past.

Especially does this apply to stations. One of the most unusual is a station that is complete with everything except trains. This is the station at Terretro rio Paco, Lisbon, which is the terminus of the Southern system of the Portuguese railways. But, although it is a terminus, its lines are three-quarters of an hours journey away. The station has waiting-rooms and inquiry offices. The passenger buys his ticket, hands his luggage to a porter, but does not enter a train.

The explanation of this is that the station serves a ferry, which takes the passenger on the forty-five minutes’ trip across the Tagos estuary to the station of Barreiro, where the railway begins.

This station at Lisbon is one that has its practical value. There is one which is a fort, a survival of the days when railway travel was not the safe thing that we know it to be to-day. This station is at Culomb-Bechar, the southern terminus of the CFAE, or Chemins de Per Algériens de l’Etat (the Algerian State Railways), and is almost on the edge of the Sahara. The line on which the Colomb-Becthar station stands runs 465 miles south of Oran. For the last 220 miles every station has a tower, loop holed for rifles to make it a miniature block-house.

This Algerian railway to-day is a prosaic affair, and many of its passengers use it to take the aeroplane service across the desert to French Equatorial Africa. But it was built as a military line by Marshal Lyautey. For years it ran through a hostile country, and was patrolled by the Foreign Legion. At Culomb-Bechar, the terminus, is the fort, and a turn-table on the rails allows the locomotives to be run inside the walls - a survival from the days when the Arabs wrecked the railway engines.

We are reminded, too, of warlike things by the station near Narva in Estonia. Where the line crosses into Russia there are a guard-house and a great girder mounted on tiny wheels at right angles to the railway line. When the one daily train has been examined, the soldiers work a windlass and drag the girder aside. Otherwise it lies across the track, to stop, presumably the unexpected arrival of unwanted troop-trains.

Frontier stations provide one or two odd stories. The Swiss station of Basle, on the borders of France and Germany, has a large clock with one face marking Greenwich time for France and on the other face one hour fast for the Central European time of Switzerland and Germany. 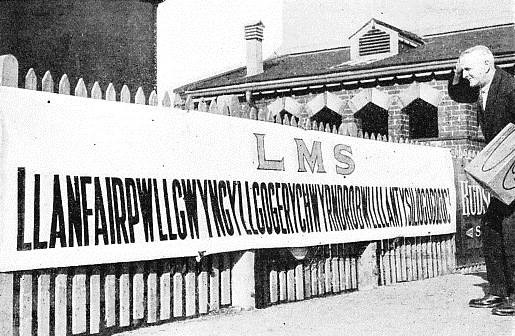 THE LONGEST STATION NAME. The ancient Welsh village in Anglesey served by the LMS used the abbreviated name Llanfair for many years. Recently, however, the station has had its full name, Llanfairpwllgwyngyllgogerychwyrndro-bwllllantysiliogogogoch, put up on a banner twenty-five feet long.

Then there is the town of Valk or Valga on the edge of Estonia and Latvia, where the frontier runs through the middle of a house in the high road; but there are two stations at either end of the town, Valk E. and Valk L. for Estonia and for Latvia respectively. Complications are caused at frontier stations where the railway gauge changes, as from the French or standard European gauge of 4 ft 8½ in to the 5 ft of Russia, or the 5 ft 6 in of Spain and Portugal. At Spanish Irun or French Hendaye, even the luxury passengers of the Sud Express must change to a train that waits a few yards away across a platform.

But at Riga in Latvia there is a change of gauge that now has nothing to do with a frontier. Riga formerly belonged to Russia, and trains from the north run in on the 5 ft gauge and then run out to the south on the standard gauge. The station manages by having separate platforms.

Perhaps the oddest of all stations that have any connection with a frontier is the Pope’s own station at the Vatican. When the Pope made his Lateran Treaty with Italy in 1929, the Vatican was officially recognised as an independent territory. It has only a few citizens - high ecclesiastics, their servers, and the like - but a clause in the treaty provided for a Vatican station. This is a spur line off the ordinary Rome railway, but it has its frontier gate and is not in Italy. No ordinary traffic runs and there will only be a very occasional special State train conveying some cardinal or other high dignitary on an ecclesiastical mission. Until 1870, and in the old days of the States of the Church, the Pope had his own saloons on either of the two Papal States lines. One of these saloons had its Oratory, its dressing-room, and its reception room for the giving of audiences at wayside railway stations.

Modern Italy has another small independent country within itself - San Marino. By some freak of history and diplomacy, San Marino remains to-day sovereign and independent. It has its own railway, with the carriages painted in the blue-and-white of the San Marino Republic; the tiny state consists practically of one miniature city at the top of a high mountain, and the railway twists and tunnels its way up from Italian Rimini. It is more fortunate than that other small country of Liechtenstein sandwiched between Switzerland and Austria. With about three miles of railway running through its territory, it possesses the “halt” of Schwan-Vaduz (Vaduz being the name of its village capital), but practically no trains ever stop there, as the sovereign State is generally approached from Austrian Feldkirch by motor omnibus.

Apart from the station in the Vatican State there are other privately owned stations. One is Vesuvius near Naples. This belongs to Cook’s, the travel agents. The nearest Italian station is Pugliano, some five miles away. From there the company runs its railway as far up the mountain as it can go, and after that it runs its own funicular railway to the summit. There are four stations on the railway itself; and then two on the funicular. As it is only a five miles’ trip, the gradient is severe, both on the lower railway and on the funicular. The maximum gradients are 1 in 4 on the former and 1 in 1.9 on the latter.

In the Scottish Highlands, eighty-six miles north of Inverness, is Dunrobin, shown in the LMS time-table as “Dunrobin (Private)”. Dunrobin is a private station on the Duke of Sutherland’s estate. A train will stop only for a guest or an employee. 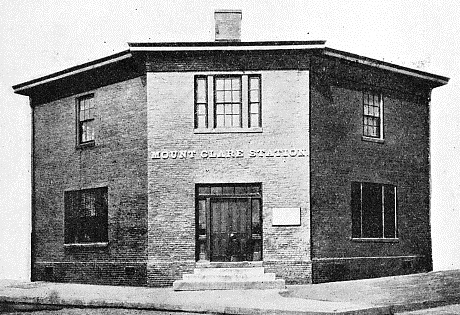 AMERICA’S PIONEER STATION, Mount Clare, on the Baltimore and Ohio system. The station claims to be the world’s oldest. The tablet on the building reads: “This building, erected 1830, is the first passenger and freight station in America, and the oldest in the world. At the time of its use, trains were hauled by horses between Baltimore and Ellicott Mills. Baltimore and Ohio, the pioneer railroad of America, the corner stone of which was laid by Charles Carroll of Carrollton, July 4, 1828”.

Another ducal station is Badminton, on the Great Western London-South Wales line, one hundred miles from Paddington. When the railway was built the Duke of Beaufort made it a condition of the sale of his land that trains should stop “by request”. Even to-day some of the South Wales expresses have a conditional stop at Badminton for first-class passengers.

Westminster, on the District Railway, has its special corridor so that Members of Parliament and Peers can walk into the Houses of Parliament without having to cross the street.

This is not uncommon. The Leicester Square Tube station has its corridor leading directly into the vestibule of the London Hippodrome just opposite. There is a long passage from South Kensington station into the museums. This was used during the war of 1914-18 for the storage of museum valuables against bombs from air raids. Sloane Square station in London has two flights of stairs instead of one, and is, in fact double the depth of the ordinary District station. It was made that way to let the railway pass under the old Tyburn River; passengers can see the “river” carried above their heads in a huge iron pipe.

In London, too, is a station built beneath a church. This is the Bank Station on the City and South London section of the London Tube Railways, which lies beneath the Church of St. Mary Woolnoth. Another London station - St. Pancras - is really only the top part of a station. The bulk of the station lies unseen below the platforms, it was built originally as a London terminus for the enormous number of barrels of Burton beer of the old hard-drinking days, and passengers were merely a minor consideration. Times have changed, and most of that space is unused. There is a tunnel down there in which mushrooms are grown to-day.

There are, of course, plenty of stations not now in use, but in Norfolk there was a station which was never used, to which one never could buy a ticket. That was Roudham on the old Great Eastern, which was an interchange junction where two lines crossed.

Another station on the Underground System changed its name to that of a famous football club. This was Gillespie Road, which became Arsenal Station when the club of that name became a household word.

The station with the longest name in the United Kingdom is on the LMS line between Bangor and Holyhead. Its proper name is Llanfairpwllgwyngyllgogerychwyrndrobwllllantysiliogogogoch, generally shortened to Llanfair P.G. Its principal industry is selling its own name on strips of paper to tourists for a copper. Bitt names are important. There is Wilpshire for Ribchester, near Blackburn in Lancashire. Once it was plain Ribchester, which is three miles from the station. It is said that an indignant traveller hired a cab and sent the bill to the company, saying that they ought not to call the place Ribchester if it were a cab-fare away. The company changed the name. But there are countries where they would think nothing of such a detail. Odemira in Portugal is fourteen miles from Odemira Station.

Some railway stations are used chiefly by pilgrims. Carfin Halt, near Holytown, between Edinburgh and Glasgow, was built especially for the special pilgrim trains that ran on great festivals to the Catholic Shrine of Carfin; it was opened in 1927. On certain days it is thronged by many thousands of people, and specials await them in the sidings.

In the USA is one of the oldest railway stations in the world - Mount Clare, on the outskirts of Baltimore. Mount Clare was a large farm owned by a miller and farmer named Carroll, who transferred ten acres of his property to the Baltimore and Ohio Railroad. At this spot the first American locomotive shop was erected, in 1829, and the first American station was opened in 1830. The station has been in continuous use ever since; but the primitive shop has been replaced by extensive locomotive works.

RIGA STATION, IN LATVIA, where there is a change of gauge. Riga formerly belonged to Russia, and trains from the north run into the station on the 5 ft gauge, and depart southwards on the standard gauge of 4 ft 8½ in.

You can read more on “Railway Architecture”, “The Romance of Station” and “Milan Central Station” on this website.