Trains That Go To Sea 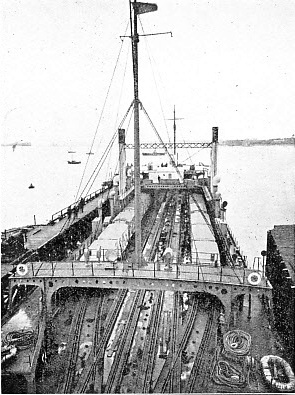 IN various parts of the world there are wide waterways that interrupt the course of the railways, and in a number of such cases the water has been bridged by taking the trains them-selves to sea. That is to say, the trains are run on to great big ferry steamers, which are arranged with lines of rails from bow to stern on which the wagons and coaches stand; and when the water has been crossed, the vehicles are run off onto the railways on the other side.

Needless to say, the connection between the ferry-steamer and the railway lines on land has to be designed very carefully, as the steamer rises and falls in her “berth” with the tide. The trains are therefore run on to the steamer by means of a hinged bridge, which makes allowance for the height of the tide.

During the war tons and tons of munitions for our armies in France were loaded into wagons and run by train to Richborough, on the Kent Coast, taken over on the same wagons to Dunkirk, and run there straight on to the French railways. Had it not been for the ferry all the munitions would have needed to be transferred from train to steamer on one side, and from steamer back to train on the other - a slow and expensive business. 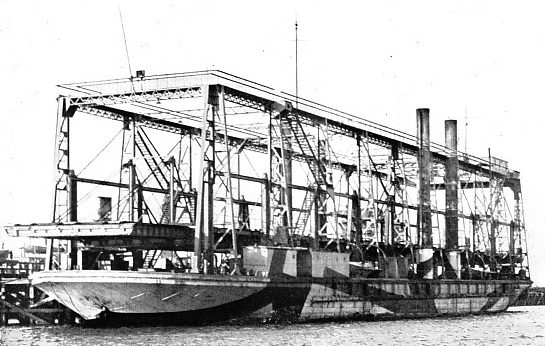 This is one of those wonderful ferry boats which, during the war, carried whole trains between England and France. The floor, which appears as if it were suspended above the hull of the boat, carried rails onto which the railway vehicles are run. It is made to rise and fall, so that whatever may be the height of the tide it can be brought level with the quay.

The first regular train ferry in the country is now being worked by the London and North Eastern Railway from Harwich, in Essex, to the famous port of Zeebrugge, in Belgium, and a stream of merchandise is being carried in both directions in through wagons. Recently, for example, a large consignment of fish was worked through by this route in record time from the East Coast ports right down to Northern Italy, where it was eagerly bought up.

As yet we have no passenger train-ferry services running to and from this country, but there are several in Northern Europe. The country of Denmark consists mostly of islands, and its capital city - Copenhagen - can only be reached by railway by means of train-ferries. All the important trains between Copenhagen and other parts of Denmark, Germany and Sweden, are worked in this way. Most of these journeys involve at least two water crossings, and sometimes three.

Locomotives do not usually travel with their trains on these ferries; but on the Oakland ferry of the Southern Pacific Railroad of America, out of San Francisco - the largest in the world - complete engines and trains, all coupled together, are carried over the water. The capacity of this ferry on one trip is 2 locomotives, 18 passenger coaches and 32 freight cars, all much heavier than those we use over here.

The other picture in this chapter shows a rather different kind of sea-trip. It represents a whole series of twelve engines, built at the great Beardmore locomotive works at Dalmuir on the Clyde, loaded on to a steamer ready to make their long voyage to India. 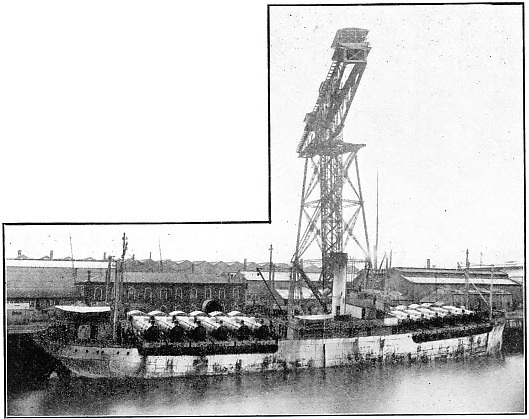 You can read more on “Out to Sea by Train”, “A Railway Which Goes to Sea” and “Train Ferries” on this website.

You can read more on “Floating Railways”, the Southern’s “Twickenham Ferry” and on the LNER’s “Train Ferry No. 3” in Shipping Wonders of the World.

NEW ENGINES FOR INDIA ON BOARD SHIP