Some Recent Developments in Mammoth Engines on the Continent 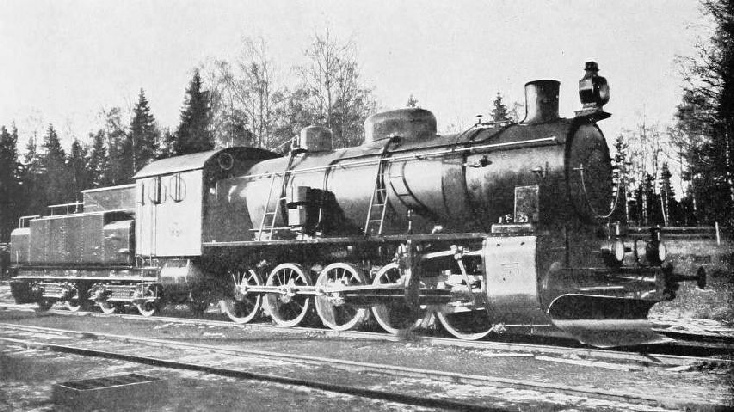 HEAVY TEN-WHEELED-COUPLED LOCOMOTIVE USED IN THE IRON ORE TRAFFIC OF SWEDEN. The engine weighs 83½ tons, the whole of which is available for adhesion.

DURING the past decade the iron ore export industry of Sweden has increased by leaps and bounds. The demand for this raw material and its economical transport to the points of shipment has taxed the facilities of the State railways to a supreme degree. The two foremost mining districts are those of Gellivare and Kiruna, in Lapland, which two fields supply more than one-half of the total output.

The extreme northern situation of these deposits in very uninviting, broken, and difficult country presented some pretty problems. While Gellivare is about midway between the waters of the Baltic and Atlantic, Kiruna is nearer the latter. On the northern Baltic Sea is the Swedish port of Lulea, which was connected to the main railway system of the country by a road running north-eastward from Bracke on the Stockholm-Trondhjem line.

When the Scandinavian peninsula was under a common government it was decided to carry a new line from Lulea across the peninsula to Narvik, an excellent port upon the Norwegian seaboard, well within the Arctic circle. By so traversing the heart of the iron-mining country the two great producing centres would be brought within immediate touch of both the Baltic anti Atlantic ports. The character of the country rendered the work one of considerable magnitude, while the technical difficulties which had to be overcome were of no mean order. Ultimately the Swedish Government undertook the longer and more difficult section between Lulea and Riksgransen on the Swedish-Norwegian frontier, while the Norwegian Government completed the short link between the boundary and Narvik.

The imperative necessity for carrying the ore from the mines to the shipping points - the bulk is dispatched from Narvik - at the lowest possible cost has brought about considerable developments in the transportation service. The weight and capacity of vehicles have been augmented; longer trains have been brought into operation; while larger and more powerful freight locomotives have been adopted. Steel 30-ton hopper wagons of the six-wheeled type are employed, while the

The locomotives are of the ten-wheel-coupled class, having a total heating surface of 2,109·75 square feet, with Schmidt superheater aggregating 634 square feet. The cylinders have a diameter of 27·5 inches and a stroke of 25 inches. The total weight of the engine in running order is 83·5 tons, the whole of which is available for adhesion and equally distributed over the five driving axles. The locomotive is equipped with a bogie tender, and its total length over buffers is 65 feet. 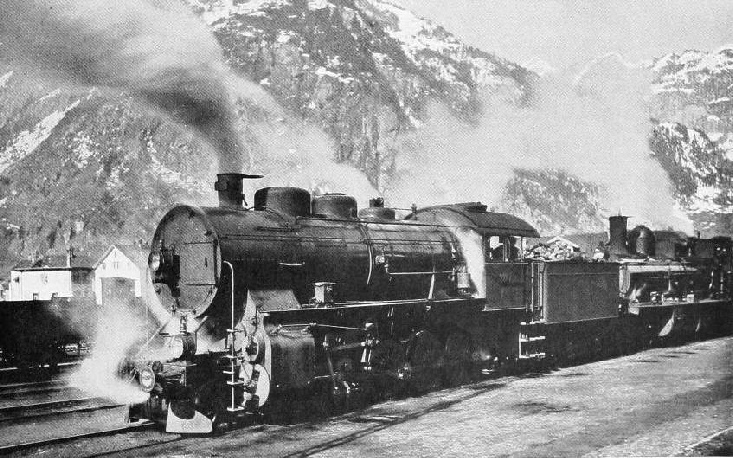 TO HAUL THE HEAVY EXPRESSES OVER THE ST. GOTTHARD PASS AND THROUGH THE FAMOUS TUNNEL, double-heading is practised, the pilot being a powerful 4-6-0 mountain locomotive.

Probably one of the most arduous sections to work upon the Federal Railways of Switzerland is the St. Gotthard line, which includes the famous tunnel. The grades are exceptionally severe for a trunk steelway, while the curves are sharp. During the past few years the volume of traffic flowing over this steelway has risen by leaps and bounds, and more and more powerful steam locomotives have to be devised to cope with the situation.

The heaviest grades are encountered between Goschenen upon the north and Biasca on the south side of the tunnel. To move the trains in either direction over this section double-heading is practised, the road engine being assisted by a powerful pilot.

When one bears in mind the generally flat character of the country of Belgium, one scarcely would look to the railway system that kingdom for the most powerful coal-burning express locomotive in Europe. Yet such is the case. This distinction has been gained by means of the mammoth Pacifies of the 10 type designed by Monsieur B. J. Flamme, the eminent locomotive engineer, and the chief of the mechanical department of the State railway system. These creations are four-cylinder simples, and have since been divided officially into two classes - those built previous and subsequent to the year 1912 respectively. While the last-named class has slightly less aggregate heating surface, and is nearly 4 tons lighter, the tractive effort is identical in each instance. The following details refer to the most recent expression of this design. 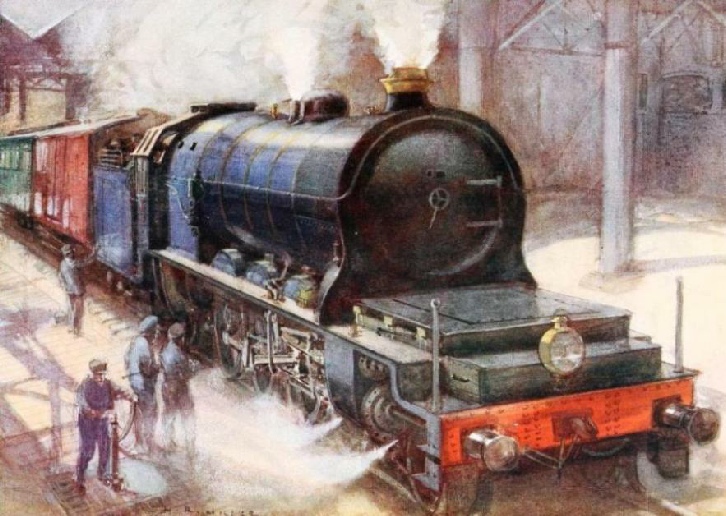 THE MOST POWERFUL LOCOMOTIVE IN EUROPE. The Flamme Pacific, which handles the fastest express service of the Belgian State Railways, leaving Brussels for Ostend. The train load averages 400 tons, and a speed of 76½ miles per hour is attained.

The diameter of the cylinders is 19·685 inches, while the stroke is 26·98 inches. The total heating surface is 3,246·3 square feet, of which aggregate the superheating surface is 667·36 square feet, while the fire-box area is 49·29 square feet. The drivers are 78 inches in diameter, and each driving axle carries 18·699 tons, giving a total weight of 56·097 tons available for adhesion. The total weight of the engine in running order is 96·45 tons, while the tractive effort is 33,435 pounds.

The six-wheeled tender carries 7 tons of coal and 4,872 gallons of water. These Pacifics are engaged in the heaviest and fastest mail service. The average weight of the train behind one of these engines is some 400 tons, but often it is increased very appreciably. Possibly the stretch upon which these monsters are able to show their paces to the best advantage is the 78 miles between Ostend and Brussels. This run is made in 90 minutes, including two stops, at Gand St. Pierre and Bruges respectively. Upon the reach of 25 miles between these two stations, where the conditions are peculiarly adapted to fast travelling, it is no unusual circumstance for this train, even with a load of 450 tons behind the locomotive, to notch 76½ miles an hour, while on the other parts of the journey 62 to 65 miles an hour are sustained with ease.

Some idea of the enormous strides which have been made in regard to the mechanical equipment of the Belgian railway system during three quarters of a century is demonstrated by comparing the huge Flamme Pacifics with the little pioneer “Le Belge”, which was the first locomotive to run in Belgium in 1835. She was a crack steed of her era, and although she has long since been retired from active service, she still is preserved as an interesting memento of the days when railways were young upon the Continent. “Le Belge” is a six-wheeled engine, 17 feet 10½ inches in length (without tender), has a total heating surface of 355 square feet, and weighs 11½ tons. Whereas the pioneer exerted only 41 horsepower, the powerful Flamme develops no less than 2,300 horse-power. Incidentally, this locomotive brings home the price paid for power and speed, since she cost £5,000.

1835 AND 1913 UPON THE BELGIAN STATE RAILWAYS. “Le Belge”, the first locomotive to run in that country, which developed 41 horse-power, standing beside the monster Flamme Pacific, which exerts 2,300 horse-power.

While the perfection of the Mallet articulated principle has adequately met the requisitions of the operating department for bigger and more powerful locomotive effort, it has precipitated its own peculiar problem. This is, the endurance of the fireman. The monsters of this class which are common to the American continent represent the limit to which this factor can be forced; physical capacity is stretched to its utmost in stoking and keeping the machine up to its work. Strenuous efforts towards the removal of this handicap are being made by the evolution of mechanical stokers, but although enormous strides have been made in this direction, perfection and reliability are still somewhat distant.

This problem, however, is possible of solution by the utilisation of liquid fuel, and in the acquisition of huge Mallets for the heaviest freight work upon its system, where stretches of the road are exceptionally arduous, the Southern Pacific Railway stipulated for an oil-burning machine. The tender is attached to the chimney end of the engine, the footplate being converted into a cab, such as those used in double-ended motor trains in this country. The point has arisen as to whether this situation of the driving position is likely to meet with the general approval of the engine-driver. Being at the extreme end of the locomotive, he is exposed to the full brunt of a collision should he be so unfortunate as to blunder into a preceding train. On the other hand, it is averred that the very fact that he is more exposed to the consequences of an error is likely to make him more than usually cautious and to induce him to pay attention to his signals.

2-8-8-2 MAMMOTH OIL-BURNING MALLET ARTICULATED FREIGHT LOCOMOTIVE ON THE SOUTHERN PACIFIC RAILWAY. The cylindrical tender, carrying 10,000 gallons of water and 3,200 gallons of oil, is attached to the chimney end of the engine, while a driving cab is provided on the footplate. In running order the locomotive with tender weighs 306 (US) tons.

The Southern Pacific oil-burning Mallet was built by the Baldwin Locomotive Company of Philadelphia, and is a huge powerful example of its class. It is of the 2-8-8-2 type, with high-pressure cylinders 26 inches and low-pressure cylinders 40 inches in diameter respectively, and a stroke of 30 inches. The boiler, of the straight type, has an internal diameter of 84 inches. There are 401 tubes 2¼ inches in diameter by 21 feet in length and 401 feed-water heating tubes of 2¼ inches diameter by 63 inches long. The heating surface comprises fire-box 232, fire tubes 4,941, feed-water heater tubes 1,220 square feet respectively, giving a total heating surface of 6,393 square feet, in addition to a Baldwin smoke-box reheater having a superficies of 625 square feet. The grate area is 68·4 square feet.

The outside driving wheels are 57 inches, while the centre wheels are 50 inches in diameter respectively. The driving-wheel base is 39 feet 4 inches, the rigid wheel base 15 feet, the total wheel base of engine 56 feet 7 inches, and of engine and tender 90 feet 4 inches. The complete weight of the engine in running order is 216·3 (US) tons, of which 149·25 tons are disposed over the drivers, and thus are available for adhesion. The eight-wheeled tender, of the cylindrical pattern, carries 10,000 gallons of water and 3,200 gallons of oil. Its weight is about 89·7 tons, thereby bringing the complete weight of the machine, under service conditions, to approximately 306 tons.

[From Part 21 of Railway Wonders of the World by Frederick A. Talbot]