RAILWAY electrification is enormously costly, and when it is complete, there must be a reasonable expectation that the saving in the cost of working the electrified railway will be big enough to pay “interest” on what has been spent in equipping it electrically. Besides that, the fact that there is no further use for all the steam engines on the line cannot be overlooked.

There are only certain conditions, so far as the science of electricity has yet proceeded, in which electrification of railways “pays”. In a mountainous country like Switzerland, which has enormous resources of water power, the rushing water in the valleys can be harnessed to drive dynamos, and electricity is thus produced at a very small cost. Thus the Swiss are now in course of electrifying all their railways, and the work is well on the way to completion. 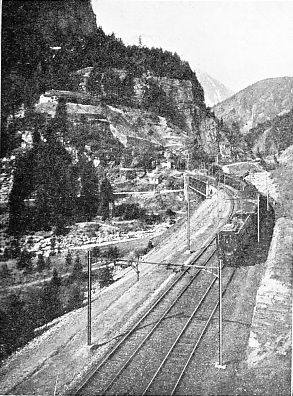 hen, again, where the gradients are steep and the loads are heavy, so that two, or even three, engines have to be used together, electrification pays, because it is possible to cut down the number of engines and crews in service, and to speed up the trains. Mountainous country, heavy gradients and water power generally go hand-in-hand, as in the case of the St. Gotthard Railway of Switzerland, illustrated on this page.

Then, again, electrification pays in the case of very dense suburban passenger services, such as those all round London. Electric trains can get up speed very much quicker than steam trains, and electrification thus results not only in faster suburban trains, but in the possibility of putting many more trains on the line, so saving the expense of laying more tracks. On parts of the electrified “Inner Circle”, and on some of the tubes, there are to-day over 40 trains running per hour on some sections at the busiest times, on the same line of rails, whereas the most that has ever been done with steam is 24 trains to the hour, and this is quite an exception.

The earliest electric railway of any importance in the world was the City and South London tube, from the Bank down to Clapham Common, opened in 1890. On this line separate electric locomotives were used, and the example was at first copied by the “Twopenny Tube”, in 1900, but both have since changed over to the use of motor-coaches, as is generally the method on British electric railways. Trains are made up in “units” of two or three cars each, each unit having its own motor or motors, and all the motors on the train are controlled by the one motorman, the train itself being actually driven at several points along its length.

Separate electric locomotives are used, however, when trains without electrical equipment are required to run over the electrified lines, such as the Great Western trains which run round the “Circle” to Aldgate. Similarly, on electrified main lines, the independent electric engine is always employed, so that any type of passenger or goods rolling stock may be used in the making up of the trains. Electric engines, too, are coming into use for shunting purposes, as in the case of the L & NE engine at the end of the chapter, which works up a very steep incline from the Tyneside quay up to the high level at Newcastle. 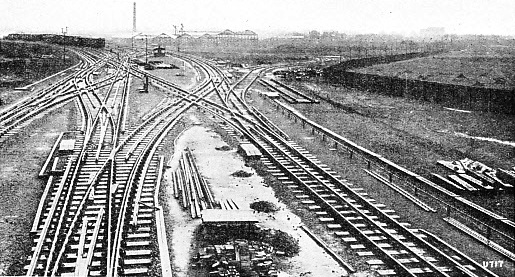 You will notice in the photographs the two distinct methods that are used for supplying the electric current to the trains. One is the “overhead” system, and the other the system known as “third rail”. Of the two the overhead is generally the cheaper to instal, but in this country, owing to the tight “fit” of our coaches under bridges and tunnels, the use of overhead equipment has presented considerable difficulties. 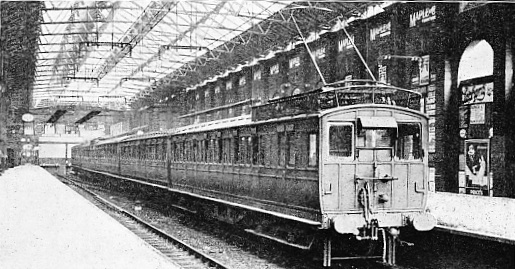 “OVERHEAD” ELECTRIC TRAIN ON THE BRIGHTON SECTION OF THE SOUTHERN RAILWAY

The only British lines of any importance with overhead electrification are the London suburban lines of the Brighton section of the Southern Railway, the Midland, Lancaster and Heysham line of the LMS, and a London and North Eastern branch carrying a heavy mineral traffic from the mining area of south-west Durham down to Middlesbrough. Practically the whole of the extensive railway electrification in France, Switzerland, the United States, and other countries, has been carried out on the overhead principle. The trains collect their current by means of overhead trolley-poles, like those of tramcars, only of the bigger “bow” type.

In the third-rail system, the motors collect current from a third rail, like one of the track rails, and placed sometimes between them and sometimes at one side of the track, by means of a “brush”, which slides along the electrified rail. As electricity has to complete a “circuit”, in order to do its work, the current must be returned to the power station after passing through the motor; this is either done through the ordinary track-rails, on which the trains run, or else a fourth rail is laid down, for the return of the current. The fourth rail is laid on one side of the line or the other, as may be convenient, and the complication that it lends to electric track is well illustrated by the photograph of the electric track equipment near Acton. 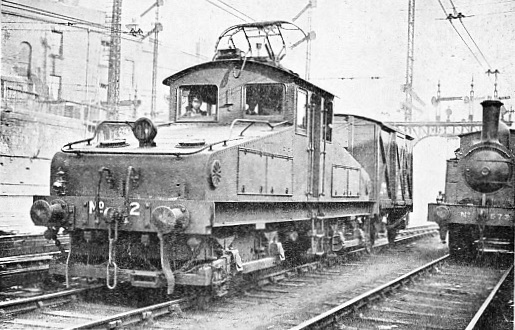 THE RIVALS - ELECTRIC AND STEAM SHUNTING ENGINES AT NEWCASTLE-ON-TYNE

You can read more on “Electric Traction”, “Electric Power on the Grand Scale”,  “Electrification in Europe” and on “Railways Under London” on this website.