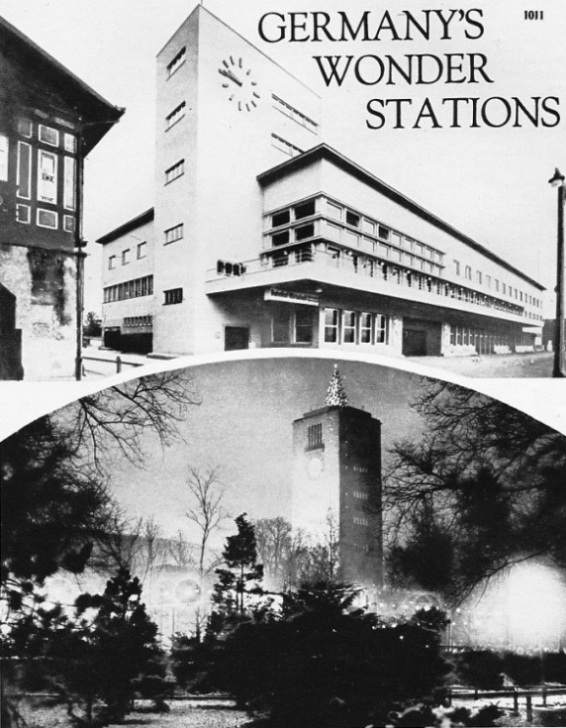 A MODERN NOTE is struck by the upper of these photographs, which shows a side view of the new harbour station at Friedrichshafen. This station, which was opened on March 7, 1933, lies on the shore of Lake Constance. The waiting-room on the first floor is provided with a balcony from which there is a fine view over the lake. The lower illustration, which shows the Central Station at Stuttgart, was taken on Christmas Eve. On the tower is an illuminated Christmas tree.

(Top left) THE IMPOSING BUILDING AT DUISBURG, near Essen, in Westphalia. This new station embodies the post and railway offices in its long, severe front elevation. The construction of the building was begun in 1932. The total floor area of the large waiting-rooms is 10,764 sq ft.

(Top centre) A NEW STATION at Oberhausen in Westphalia. The building is covered with clinker and terra-cotta, which offer resistance to the corrosive properties of the air in this industrial district. The towers contain the station’s water-tanks.

(Centre) The booking-hall at Oberhausen. There are nine ticket offices in this building.

(Top right) STUTTGART. The  main booking-hall of one of the principal German stations. The building was constructed between the years 1913 and 1925. Simplicity combined with spaciousness is a characteristic of this as of many other modern German stations, and the style contrasts with that of the pre-war architecture of Hamburg.

(Bottom left) THE LOFTY CONCOURSE of the station at Duisburg. This contains the ticket-offices, entrances to waiting-rooms, and information bureaux. The height of this hall is 47 ft, and it has fifteen ticket windows.

(Bottom centre) HAMBURG CENTRAL and its approach. The station was built in 1900-1906. The concourse at Hamburg has been built above the track. A bridge-like transverse section includes ticket-offices and waiting-rooms, and has stairways leading to the platforms. The total floor area of the waiting-rooms is 7,922 sq ft.

(Bottom right) GERMANY’S LARGEST STATION is at Leipzig. The station building covers an area of 882,642 sq ft. The eleven platforms are reached from a transverse section 876 ft in length. An exterior view of Leipzig station appears in part 26. 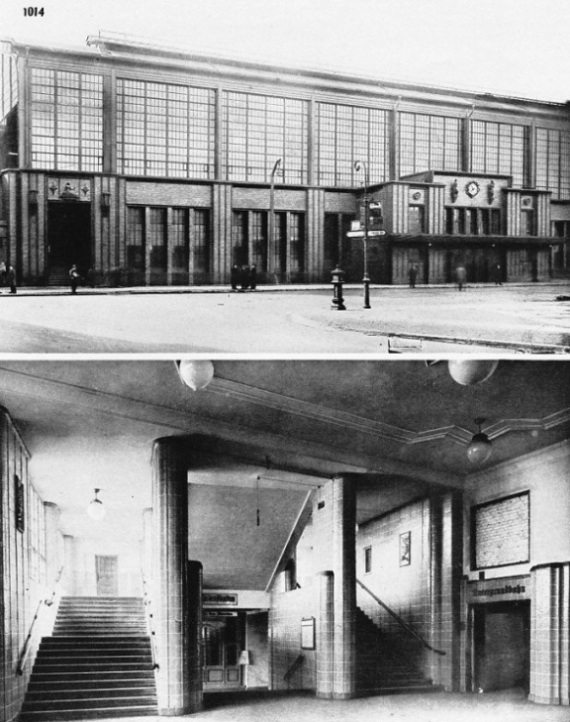 FRIEDRICHSTRASSE STATION,  a large through station in the heart of Berlin. The line continues to the Schlesicher Bahnhof, which is the terminus of the lines coming from the east. The track at Friedrichstrasse is elevated and the waiting-rooms and offices are situated beneath the platforms. The station was reconstructed in the years 1919-1925. The upper photograph gives a view of the north front, while that below shows a sections of the lower part of the building.

You can read more on “Germany and Holland”, “Railway Architecture” and “Some German Achievements” on this website. 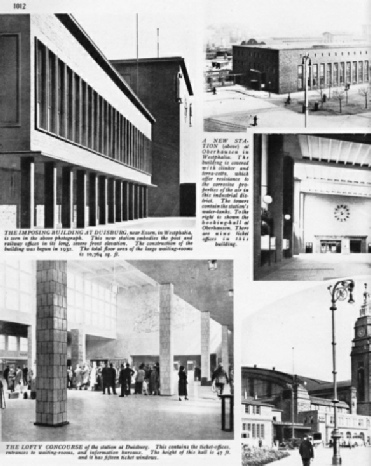 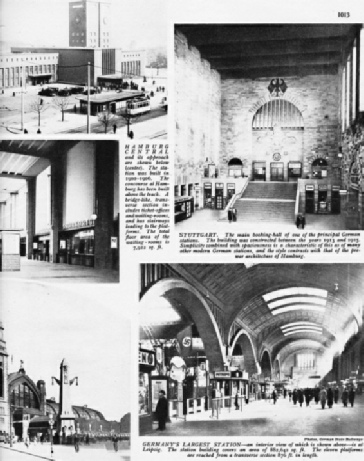