On the Footplate of a “Night Goods”

From Exeter to Nine Elms 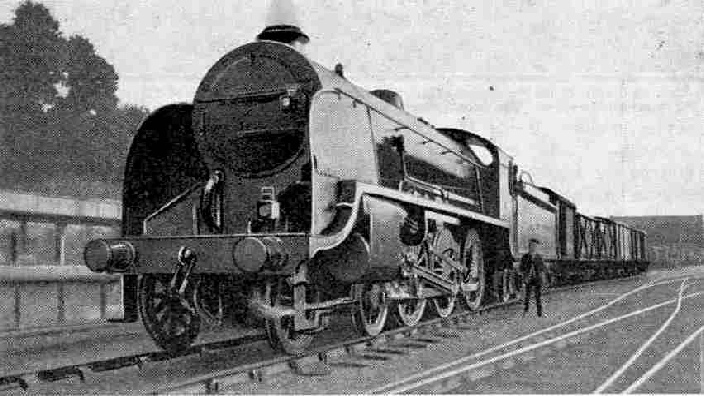 At the start of the run. The SR Locomotive “No. 826” is a mixed traffic 4-6-0 of Class “A”, which closely resembles the passenger “King Arthurs.”

DURING the last few years some notable speeding-up of express goods trains has taken place on all the British railways. Many trains conveying perishable freight, and composed entirely of wagons fitted with continuous brakes, are timed at speeds of 35 to 45 mph for the whole of their journeys. A run of 150 to 200 miles with such trains involves some really fine locomotive work.

A good example of these high-speed freight trains is the Southern Railway 7.38 pm from Exeter to London, which covers the 170 miles in 5 hours, inclusive of two stops totalling 13 minutes. I was recently privileged to ride on the footplate of this express for the whole journey, and a deeply interesting run it was.

From Exeter our load was not very heavy, 16 four-wheeled vans and a bogie brake van, a total weight of about 200 tons. The engine was one of the fine Class “A” 4-6-0s, which are almost identical with the “King Arthur” express engines except that they have smaller coupled wheels of 5 ft 7-in diameter. The actual engine was No. 826, in charge of Driver Hayman and Fireman Spray of Exmouth Junction shed.

We got away in fine style, in fact the engine accelerated so rapidly down the falling gradient from Exeter that at Broad Clyst, less than five miles from the start, we were doing 65 mph with a goods train! The engine was working on 20 per cent cut off and the regulator was only two-fifths open, and even on such easy steam as this was so master of the load that the same working was sufficient to take the train up the long climb to Honiton tunnel. Even on the last stretch where the gradient is 1 in 90 the speed did not fall below 23 mph.

From the summit to our first stop at Templecombe very easy running was needed to keep time. On this stretch I was astonished at the freedom with which the engine steamed. We were maintaining an average of 40 mph over a very hilly road, and yet often we would travel for 8 or 10 miles without the fire being touched, and then only two or three shovelfuls were put on. The riding of the engine was very smooth, and even at 50 or 60 mph I was able to walk about on the footplate in comfort. So we reached Templecombe 59½ miles from Exeter in 102 minutes - four minutes early.

Here the load was increased to 43 vans which, with the bogie brake van, weighed about 500 tons. After a stop of 18 minutes we got away in tremendous style. On 35 per cent, cut off and the regulator nearly three-quarters open, “No. 826” accelerated just like an express engine. Two miles from the start we were doing 48; then came a sharp rise of two miles at 1 in 100 where we fell to 31; descending to Gillingham we reached 52, and then at the top of the four mile rise to Semley, again at 1 in 100, our speed was 25 mph. The following comparison with the speed of an express passenger train over this stretch shows what splendid work this was. On my last journey with that most famous of Southern trains, the “Atlantic Coast Express”, No. 768, “Sir Balin”, a “King Arthur”, with a load of 445 tons, passed Gillingham at 65 and fell to 35 at Semley; that is during the four-mile climb the speed of the express fell 30 mph, while that of the goods fell only 27.

A freight train takes a good deal more pulling than a passenger train because the friction is much greater. For an equal weight a goods train has nearly twice as many axles; the wagons do not travel so easily, they sway about, and all this increases the drag on the engine.

Once over Semley summit, the driver brought the cut off back to 20 per cent, again and the regulator was moved to about a quarter open. We kept up a steady 45 to 50 mph all the way down to Salisbury. It was now after 10 o’clock and nearly dark. In the twilight of a perfect summer evening it was most difficult to pick out the green signal lights, for they harmonised strangely with the blue-green of the woods and cuttings. After a careful slowing round the sharp curve at Wilton we reached Salisbury, 28½ miles from Templecombe, in 47 minutes, exactly to time. 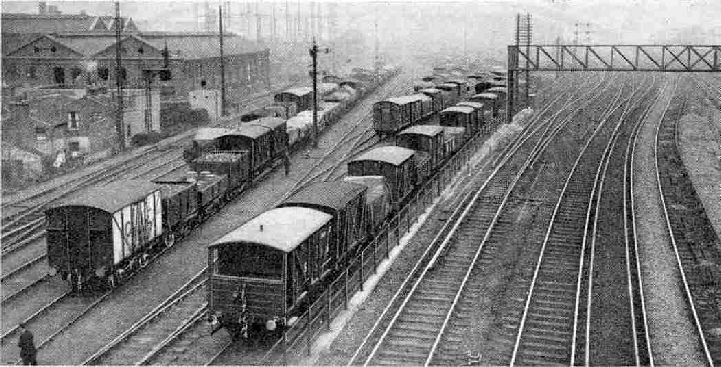 A view of part of Nine Elms Yard, where the journey described in this article terminated. This is the chief SR depot in London for freight traffic to and from the West Country.

Here “No. 826” came off and was replaced by “No. 778”, “Sir Pelleas” of the “King Arthur” class, in charge of Driver G. Gray and Fireman Barton of Nine Elms shed. The driver greeted me with: “Have you got springs in your boots?” We had not travelled far before I knew what he meant! This engine was due for the shops and was riding very roughly. Nevertheless a splendid run was made. Up the steep rise over the eastern ridge of Salisbury plain, on 30 per cent, cut off, “Sir Pelleas” gradually accelerated until we passed Grateley summit at 35 mph, 11 miles from Salisbury in 27½ minutes.

This engine, like “No. 826”, was steaming very freely. The fire-box door was kept open the whole way, which was fortunate for me as I was able to read my watches easily in the light of the fire.

Down the steep descent to Andover speed rose rapidly and the racket now became terrific. It was not a case of rolling or swaying, but a high-pitched, sustained rattle. We had just reached 60 when on went the brakes in readiness for a bad permanent way slack through Andover. For about a mile we crawled along at about 10 mph, and then more steep climbing ahead. On 25 per cent cut off, and with the regulator nearly full open, we regained speed steadily. Barton gave the fire a good stirring up with the pricker and we were soon doing 40 mph again. Up the gradual rise to Oakley this rate was sustained, and then, on breasting the summit, there began a spell of really fast running.

At Worting Junction the speed was 50 mph, and three minutes later we flew through Basingstoke. To roar across the maze of points and crossings, with shunting going on on both sides of the line, and then to sweep through the big station at 55 mph, in the dead of night, was a truly thrilling experience. We were doing 60 just afterwards, and kept up an average of 46 for the next 30 miles. I had become thoroughly used to the racket by now, and the speed was most exhilarating. It was a brilliantly clear moonlight night; one could see great distances across the country, and the wooded hills around Farnborough and Pirbright looked especially lovely. After passing Woking the fire was being very gradually let down, we were nearing home.

Approaching Wimbledon, for the first time in the whole journey, we got signals badly on, in fact we were nearly stopped; but the signal cleared just in time. The fire was quite low now, and it was interesting to study the inside of the fire-box. The underside of the brick arch was covered with incrusted matter hanging down like innumerable stalactites from the roof of a cave, all gleaming white hot. When steam was put on again, the draught at each “puff” made hundreds of red hot embers jump up from the floor of the grate; it was quite a fascinating sight. 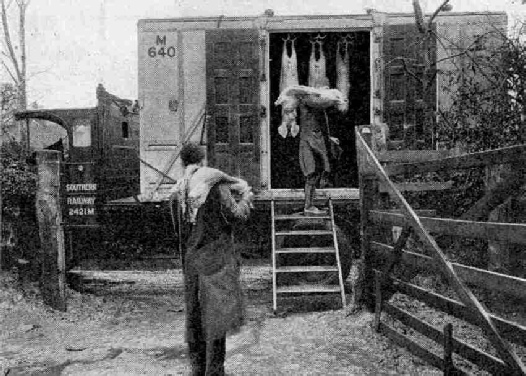 Loading meat into an SK insulated container at a West Country farm. Despatched in the afternoon, it is delivered In London early next morning.

Soon we were running through Clapham Junction, and then we were switched off the main line into Nine Elms yard. The finish was one of the strangest features of the journey. To draw up in the dark loneliness of a goods yard, with only one or two shunters with hand lamps to welcome us, seemed a curious end to a fast run compared with the animated scene on the arrival of an express at a big terminus.

In about 10 minutes a path was clear for us to back out on to the main line again. There was a short wait for the signal, and then we steamed cautiously round into Nine Elms shed and the night’s work was done. “Sir Pelleas” had run the 82 miles from Salisbury to Nine Elms in 147½ minutes, but the net time allowing for delays was only 130 minutes, an average of 38 mph.

So much for the locomotive side of the journey. In the meantime what has become of the train that we brought up from the West? This has been seized upon by the yard staff and rapidly unloaded in order to rush the meat fruit, vegetables and foodstuffs generally that composed our freight to the early morning markets. If we had had the opportunity, an exam-ination of the load would indeed have been interesting. Probably it would have included sheep and pigs - carcases to-day, hanging in rows in railway vans or containers, but yesterday very much alive; baskets of poultry, kegs of butter, cases of eggs, and hampers of fruit and vegetables.

Special measures are employed to ensure the swift conveyance of these miscellaneous foodstuffs to Smithfield, Covent Garden and elsewhere. Suitable containers are used in increasing numbers for perishable traffic of this nature, and fast motor vehicles await the arrival of trains at Nine Elms.

If we could follow the West Country farm produce in the final stages of this cycle of efficient transport we should find ourselves at one or other of the great London markets. Of these none is more interesting than Smithfield, the famous meat market. In addition to specially rapid transport arrangements from centres of production that are afforded by all the four group railways by way of their London goods depots, there is actually a railway station situated underground below the market. 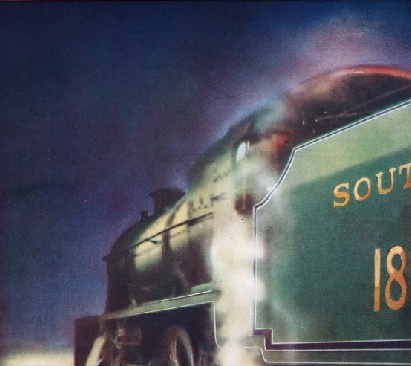 You can read more on

“Goods Trains and Their Working” and

“On the Footplate of an Express”