More on Frederick A. Talbot’s “Railway Wonders of the World” 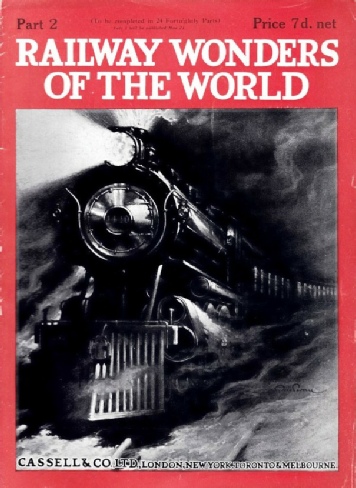 Clarence Winchester’s part work Railway Wonders of the World was preceded by Frederick Talbot’s part work of the same title. Appearing over 20 years earlier, it appeared in fortnightly parts priced 7d each. It was published by Cassell & Company, and from the covers, it seems the issues were available in London, New York, Toronto and Melbourne.

Since the bound volumes appeared first in 1913, it is assumed the fortnightly parts will have been published on April 23 1912, with issue 2 on May 7 and so forth. The last issue appeared on March 11 1913. Therefore despite being half the number of parts of the later version published by the Amalgamated Press, it took just as long for the series to be completed.

Unlike the later version, all the covers of Cassell’s edition were the same, featuring an American style locomotive and train. They included advertising inside the front cover and on the endpaper, but much of it was not railway related. This left no space for any editorial (or other) comment. Presumably information about binding options were either left to the purchaser, or the information was inserted inside relevant issues of the part work.

Each issue in this series comprised a full page colour plate relevant to an article, although not necessarily within the part purchased. For instance, part 1 included the colour plate featuring the Forth Bridge even though the article on this did not appear until part 9. This was rectified in the bound volumes, but not necessarily if the purchaser decided to have the parts bound elsewhere and in the format they were originally issued in. Each colour plate had the part number printed in the lower left hand side of the plate, adjacent to the caption. This is true even in the bound volumes.

The colour plates, issued with each part, were as follows: 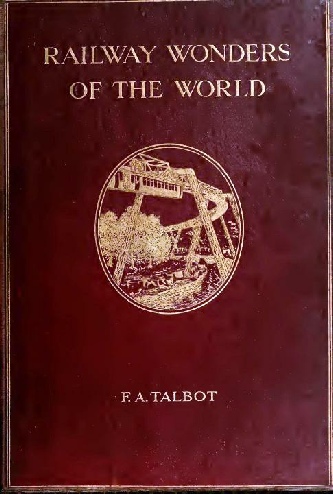 Like its later counterpart, Cassells offered bound versions of the complete work. There appears to have been no option to send off the parts for binding, although this may have been offered (any evidence of this would be welcomed – please use the contact form). The cheaper binding was in two volumes, bound in dark maroon with a “head on” vignette of a steam locomotive in gilt on the spine, and a larger vignette of an overhead railway on the front cover, underneath the title and over the author’s name. This edition included all the original illustrations and the colour plates, most of which were moved to the relevant section(s) of the text.

The “de luxe” version was in a rich blue binding and appeared in four volumes. This type was published by the Waverley Book Company. The spines feature a stylised “head on” view of a North American steam locomotive, with smoke billowing from the chimney and the track depicted in front. This design fills the entire spine with the exception of the title details at the head, and the publisher’s name at the foot. The front covers are plain, except for a vignette of a “head on” view of a steam engine with outspread wings. One major addition to the four volume edition is that it includes 12 folding plates of various express trains that never appeared with the fortnightly parts. One appears as the frontispiece to each volume instead of one of the colour plates. These are again rearranged to appear in the relevant section of the text.